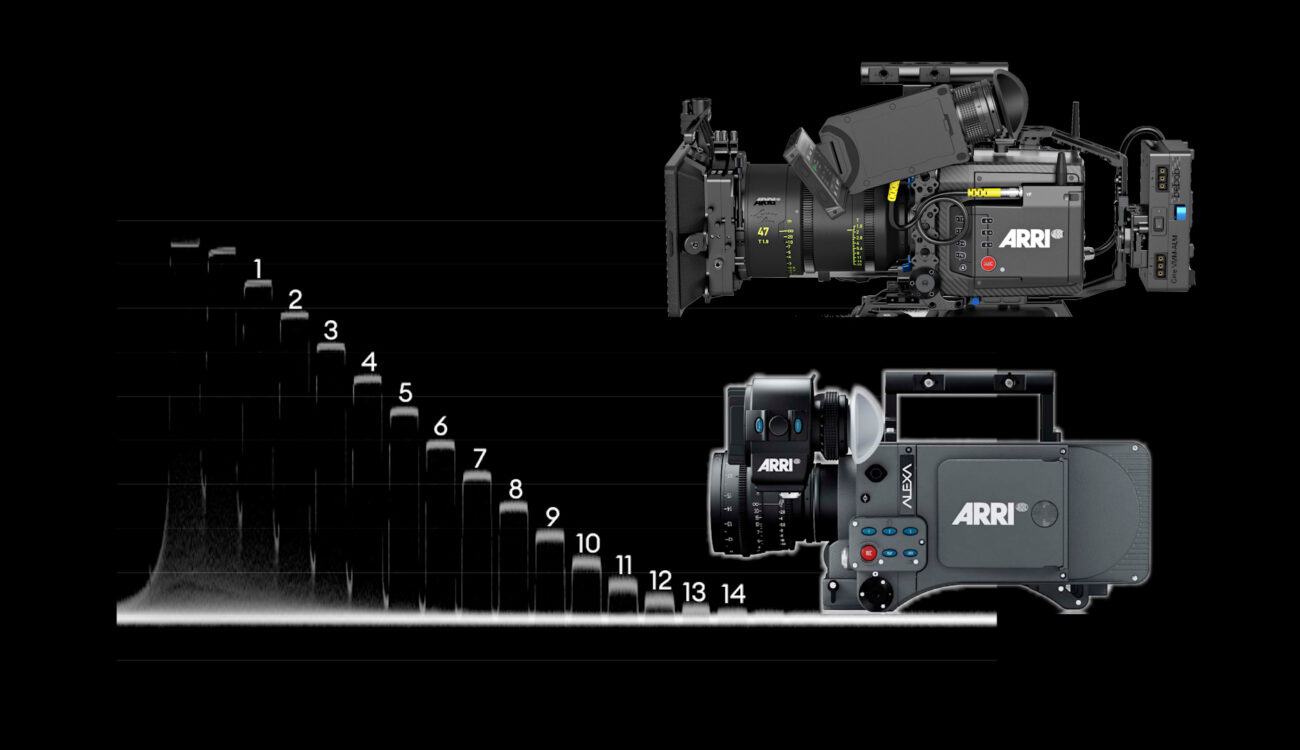 First of all, a big thank you to AV Pro, a Vienna-based rental house, who loaned us the ARRI Mini LF including SIGMA Cine primes! Secondly, another big shout out goes to Konstantin “Costa” Konstantinou as well for lending us his ARRI Alexa Classic camera!

Thirdly, I’d also like to mention NVIDIA, who gave us a RTX 3090 graphics card to test various cameras with – thank you!

You might ask why this article is about two cameras instead of one. Well, my colleague Sebastian already tested the ALEXA Classic many moons ago, so I thought it would be good to just quickly retest this classic ARRI camera to make sure all results fall into the same place before moving over on to the ALEXA Mini LF.

This article is organized as followed: we will first have a look at the rolling shutter and dynamic range of both ARRI cameras, and then we will take a detailed look at the latitude of the ALEXA Mini LF.

Have a look how we test dynamic range using our XYLA21 stepchart and IMATEST here.

The rolling shutter shows a really good value of 7.2 ms.

With its full frame senor, the ALEXA Mini LF shows slightly higher rolling shutter values than the ALEXA Classic, 7.4 ms. This is the best result that we ever measured for a full frame sensor – the best so far was the Sony a7S III which showed 8.7ms (at 1.0x crop full frame).

Looking at the waveform plot shooting the Xyla 21 stepchart shows a strong 14 stops that can be identified above the noise floor:

Taking the Xyla21 stepchart files into IMATEST, we get the following result: the ALEXA Classic shows a strong 13.8 stops of dynamic range at a signal to noise ratio of 2, and 14.8 stops at SNR = 1. Also, 18 zones are identified by IMATEST. Those are the highest values we ever measured in our lab.

Looking at the middle graph, it is easy to see that even above the 14.8 stops (SNR = 1, blue curve) about two stops more are identified by IMATEST within the noise floor. Those can certainly be utilized using advanced noise reduction techniques in post.

The 13.8 stops at SNR = 2 are within 0.2 stops of the 14 that were measured by us more than 7 years ago. So all good on this front (thats the beauty of a standardized test setup), and we can move now to the ARRI ALEXA Mini LF.

Dynamic Range of the ARRI ALEXA Mini LF at ISO800

Very similar to the ALEXA Classic, a solid 14 stops are identified above the noise floor. A 15th and even a 16th stop are visible as well.

Wow. Again, those are the best results we’ve ever measured in the lab for a full frame sensor. Quite interestingly, it’s a tiny bit less (at SNR = 2) than for the ALEXA Classic – it seems that the internal signal processing was changed a bit going even more towards a “raw” signal with less noise filtering. However, more zones are identified and 3 additional stops are buried in the noise floor. Hence, the Mini LF fares similar if not better than the Classic in the dynamic range department – as can be seen in the waveform plot, as well.

The above results for both the ARRI ALEXA Classic and Mini LF show why ARRI has been the reference for digital cameras for more than 10 years. Not a single camera tested so far in our lab has come close to these dynamic range results.

Latitude is the capability of a camera to retain details and colors when over- or underexposed and pushed back to base exposure. Some time ago, we have chosen an arbitrary value of 60% luma value (in the waveform) for our subjects’ faces in our standard studio scene. This CineD base exposure should help our readers to get a reference point for all the cameras tested, regardless how they distribute the code values and which LOG mode is used.

Depending on their LOG curve and code value distribution, some cameras are already quite light at 60% luma, others are darker. As an additional information, I will also give you the 18% reference grey value.

For this test we used a SIGMA Cine Prime, 85mm T1.5. Using a shutter angle of 356° (360° setting is not possible), an aperture value of T1.5 and ISO800 and my colleague Johnnie’s face is at the cusp of clipping with max. studio light output. Brought back to our base exposure in DaVinci Resolve 17.1, using the camera raw controls and a 3D LUT (ARRI Log C to Rec709) the following image is obtained:

As can be seen above, nothing clips, also the left side of the color checker is completely intact.

Impressive. And it doesn’t stop there. Looking at the 3 stops under shot, it is a bit noisy, but it is a very fine, pleasing noise:

Now, lets go further to 4 stops under, brought back:

The noise becomes more prominent at 4 stops under, brought back. The image still looks good, but if you feel you need it, noise reduction would clean up the image nicely.

At 5 stops under, brought back, noise really starts to kick in heavily:

At this point noise reduction is required. But because the noise is finely dispersed, noise reduction works quite well, as seen on the image below. I have to mention though, that shadow information starts to clip at 5 stops below our CineD base exposure – which corresponds well to the waveform shown earlier (as the shadows are another 5 stops below the face, we are 15 stops below clipping).

I had to use quite heavy noise reduction (in relation to other cameras) to get a good clean up. For your reference, here are the noise reduction settings in DaVinci Resolve 17.1:

At 6 stops below our CineD base exposure, shadow information is starting to fade, and noise heavily degrades the image. Nevertheless, no horizontal or vertical lines appear, as can be seen with so many other cameras. Astonishing.

Using heavy noise reduction still leads to a somewhat usable image, but I would say the point of no return has been reached:

Quite impressive, to say the least. For our standard studio scene, the ARRI ALEXA Mini LF shows an exposure latitude of about 10 stops (5 over, 5 under). The best cameras so far in our lab have showed 8 stops of exposure latitude (the Panasonic S5, and the Canon C300 MK III for example). All that without nasty horizontal / vertical lines, and no significant color shifts.

Not surprisingly, the ARRI ALEXA Classic and Mini LF show the best lab test results ever measured by us in all disciplines: rolling shutter, dynamic range and exposure latitude. That was to be expected of course, but considering that the ARRI ALEXA Classic sensor design is already more than 10 years old, I find it impressive that ARRI’s line of cameras still represents the benchmark in this industry for a digital cinema camera.

Have you shot with an ARRI ALEXA camera before? What are your thoughts on this timeless piece of equipment? Let us know in the comments below.