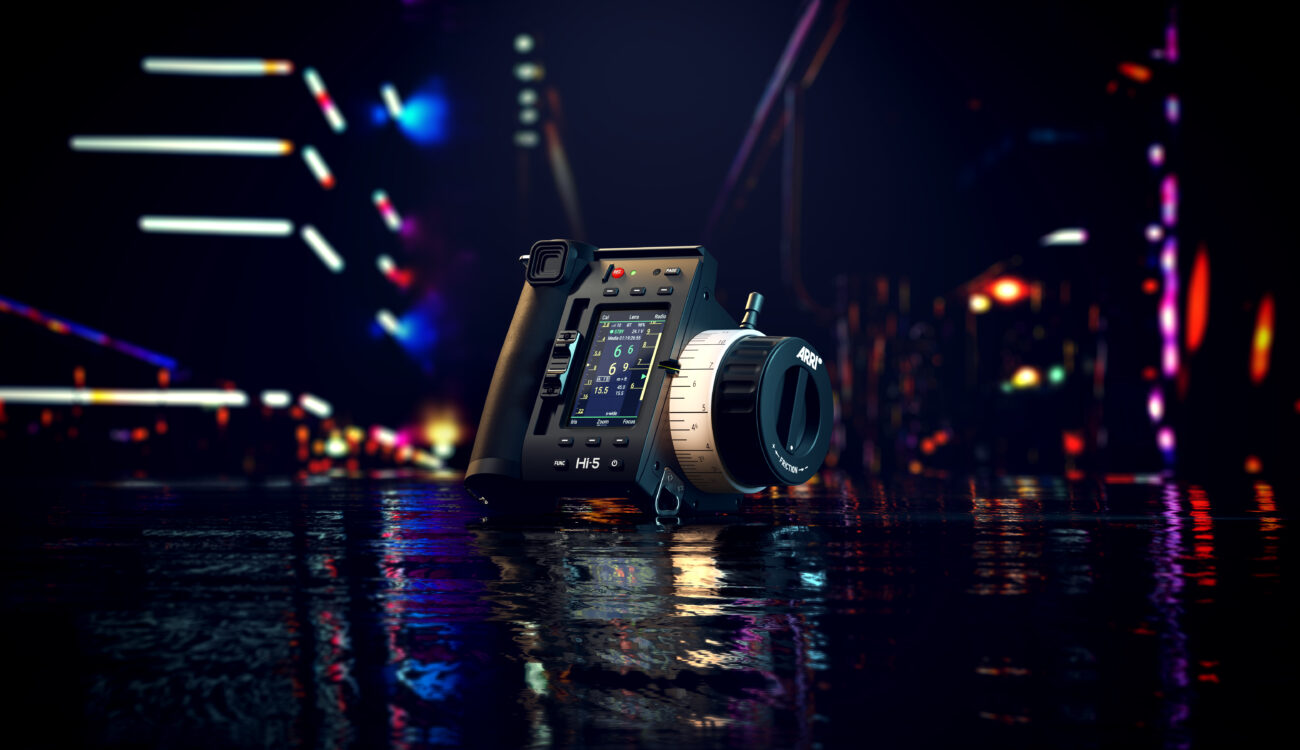 The Hi-5 is the successor to the highly acclaimed ARRI WCU-4 (introduced back in 2012). Together with the Preston HU4 hand unit, they form the top end of wireless control and focus units.

According to ARRI, Hi-5 stands for:

It’s also part of their 5th generation Electronic Control System (ECS). The form factor didn’t change much from the WCU-4 due to the already proven design. One of the more notable and handy changes on the outside is a Nato rail on the top of the unit for mounting monitors or other accessories.

Like with previous hand units, you can control ARRI cameras like the ALEXA Mini LF over the Hi-5’s interface without any additional receivers or adapters. With the Hi-5 you can control now cameras outside of the ARRI family, including Sony and RED.
The user interface is closely matched to the one of the ALEXA Mini LF, making it very intuitive and easy to use.
Additionally, the ARRI ECS Sync App allows you to manage lens files and software updates over an iOS device.

The biggest announcement was the introduction of swappable radio modules. Shooting in different locations makes it difficult to rely on only one bandwidth. 2.4GHz is a popular choice for many manufacturers, but it’s also the wavelength of Wi-Fi, Bluetooth, microwave ovens, and much more, so it’s quite a congested frequency band. With the new Hi-5, you have the option to switch between multiple modules.

ARRI will release three radio modules: Two in the 2.4 GHz range (RF-EMIP with direct sequence technology (single frequency), and the RF-2400 with frequency-hopping spread spectrum technology). The third one will be in the 900 MHz range and is only usable in the USA and Canada due to frequency regulations. Possible future modules could be plugged in, so Hi-5 owners could accommodate future standards. The RF-EMIP module is the only one fully backwards compatible.

The Hi-5 should be compatible with all products supported by the WCU-4. We will probably also see more new products in the ARRI ECS family.

ARRI emphasized reliability with a ruggedized, sealed, weather and dustproof housing. If you know ARRI products, you know this means something.

Also new: Smart pre-marked focus rings, which when attached communicate with the Hi-5 hand unit. So as long as your lens is calibrated and attached correctly, you won’t need to measure distances through the lens and mark them on separate focus rings.

Internal capacitors allow for hot-swapping batteries without turning the Hi-5 unit off. The unit takes NP-F550 type batteries, a popular battery type invented by Sony, but used by many manufacturers. ARRI will sell their own batteries of this type, the ARRI LBP-3500, which will sell for 95€ each.

And the last (and maybe my favorite) feature: the tail slate mode. It prevents the operator from stopping recording before capturing the tail slate on shots that need it. I suppose it’s just something like a pop-up saying “Are you sure?” which needs a second confirmation action. But hey, I don’t know how many times the tail slate was forgotten on sets I’ve been on, so no matter how simple this function is, it is very welcome.

Preorders for the Hi-5 hand unit will open this week, shipping will start at the end of August. We have no words on pricing yet, but I guess it will be close to the ~6500€ / $8000 they were asking for the WCU-4 hand unit.
This is of course significantly more than the asking price of products by Tilta or others, but ARRI says it will be “the most sophisticated hand unit on the market“, and considering the swappable radio modules, it would be a long-term investment that could be worth it.

Learn more about the ARRI Hi-5 on ARRI’s website here.

Have you used the ARRI WCU-4 before? What do you think about this new hand unit? Let us know in the comments.