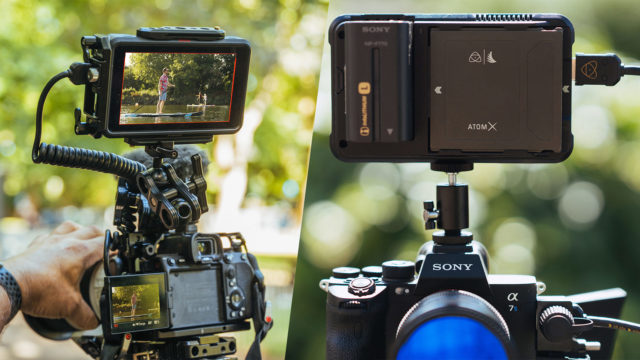 Atomos announced that the Ninja V will get a free AtomOS update in September 2020 which will allow the recorder to capture the 16-bit linear RAW signal from Sony a7S III and save it as 12-bit log ProRes RAW files. This will work at up to 4K60p. Since the Ninja V records the entire sensor, it will actually give you roughly 4.2K – a bit over the C4K (DCI 4K) resolution.

As we know from yesterday’s Sony a7S III release, the camera will not only offer impressive internal recording modes with up to 4K120 in 10-bit 4:2:2. It can also output 16-bit RAW video signal over its full-size HDMI connector. You can read (and watch) all information and hands-on experience about the new camera in our previous posts:

Shortly after the Sony a7S III announcement, Atomos published the news that their 5″ HDR recorder Ninja V will get a firmware update to support RAW video from the new Sony Alpha flagship. Let’s take a look at the details.

The Ninja V will be able to record full dynamic range of the a7S III in 12-bit Apple ProRes RAW for enhanced latitude in post-production. The RAW files are optimal for HDR finishing, or for greater flexibility in SDR (Rec.709). Images are recorded directly to AtomX SSDmini or other compatible SSD drives. As the Sony a7S III only records UHD internaly, this is the only way how to get C4K (DCI 4K) resolution – Ninja V records the whole sensor which is roughly 4.2K – a bit over the C4K resolution.

As the 5” monitor of the Ninja V offers 1000nit brightness, it allows users to view the a7S III RAW signal in HDR in a choice of HLG and PQ (HDR10) formats or view natively in Sony’s S-Log profile with LUTs. (Note that 1000 nits of brightness will give you a bit more dynamic range on screen than a Rec.709 image, but even high-end HDR monitors (for a lot more money) can’t display more than 10 stops or so.) The monitor offers touchscreen access to tools like waveform, magnification, and peaking.

The ProRes RAW recording with the Ninja V does not have any time restrictions. You can record as long as there is space on the media and power for the device. Because the recorder has active cooling, it does not overheat. Good thing is that the a7S III can simultaneously internally record to memory card while the Ninja V captures the RAW video output. That way, users can have backup files for the ProRes RAW material.

The 16-bit linear RAW output of the Alpha 7S III is compressed and recorded in the Ninja V as 12-bit ProRes RAW at up to 4Kp60. One key benefit, especially in low light (in high ISO), is that the ProRes RAW files allow users to take fine control of how noise reduction and sharpening is applied to images. With this workflow, users can bypass things like the in-camera sharpening and noise reduction and adjust them for each shot with more precision. This should be key as the a7S series of cameras usually uses a lot of internal noise reduction in order to get the cleanest possible low-light images.

Atomos CEO Jeromy Young assured us that the Ninja V captures “almost all the image information” coming from Sony’s 16-bit linear RAW in the 12-bit log ProRes RAW. The difference between linear RAW and log RAW is a highly technical topic and there are different opinions about which approach is better.

Both ProRes RAW, and the higher bandwidth, less compressed ProRes RAW HQ are supported. ProRes RAW is currently supported in Final Cut Pro X, Adobe Premiere and Grass Valley Edius, along with a collection of other apps including ASSIMILATE SCRATCH, Colorfront and FilmLight Baselight.

The a7S III is also the first Sony Alpha camera to output 10-bit 422 video over HDMI. The Ninja V and other current Atomos recorders can record this as 10-bit 422 Log or Rec.709 video at up to 4Kp60 into ProRes or DNx codecs. These provide longer record times and practical data rates than the ProRes RAW.

To showcase the image quality from the a7S III and Ninja V ProRes RAW combo, the UK-based filmmaker Philip Bloom shot a short promotional film for Atomos titled “The Paddleboarder”. What do you think about the short film?

As Atomos said, the RAW recording over HDMI from the Sony a7S III will be enabled after a free AtomOS update on the Ninja V. The update is currently planned to be released in September 2020 which would be just in time for the camera to start shipping as well.

Do you work with ProRes RAW material? Would you get the Ninja V for the Sony a7S III? Let us know in the comments section underneath the article.