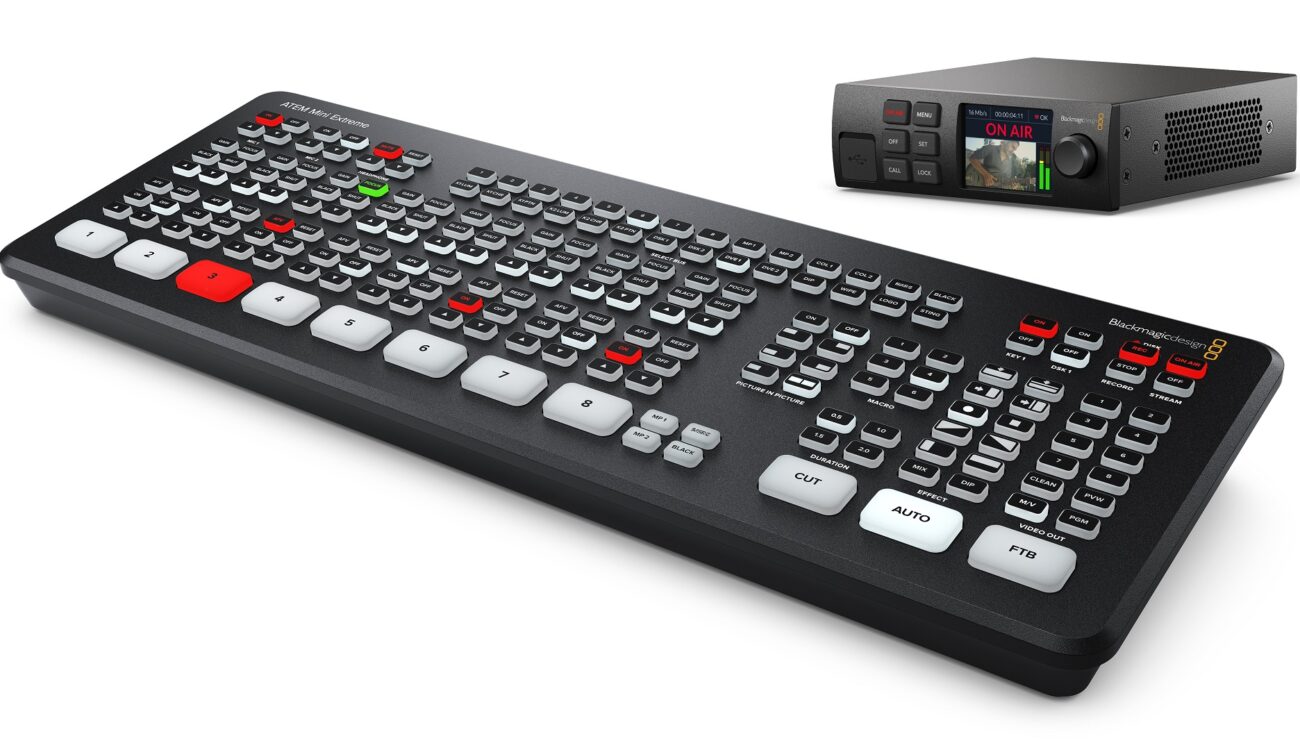 We already published one article with the newly announced Blackmagic Pocket Cinema Camera 6K Pro along with the OLED EVF and the new battery grip. During today’s live stream, Blackmagic Design’s CEO Grant Petty also announced a couple of new products for multi-camera productions and live streaming. Let’s take a look at what is new.

The newly announced ATEM Mini Extreme is a significantly larger switcher than all the other products from the ATEM Mini line so far. It features 8 HDMI inputs with up to 1080p60 signal and multiple HDMI aux outputs. The panel has now two USB connectors for recording as well as connecting to the computer and live streaming at the same time.

There are camera controls on the panel itself. Users can control iris, ISO, black level, and focus. By holding the focus button on the ATEM, it triggers the autofocus of the selected camera.

The ATEM Mini Extreme supports streaming via Ethernet or tethered 5G or 4G phones via USB for mobile remote streaming. It can record to USB flash disks in H.264. There are two stereo audio inputs for connecting desktop or lapel microphones. The switcher automatically converts and re-syncs all HDMI inputs and it includes free ATEM Software Control for Mac and Windows. There are now two media players in the ATEM Mini Control Panel.

The new Web Presenter HD is a compact design that includes a 12G-SDI input with down converter, so it outputs 1080p video. There is a built-in front panel with LCD and menus, USB webcam features, plus a monitoring output with audio meters, streaming status and full SDI and embedded audio technical details.

It supports streaming via Ethernet or tethered phones via USB and it includes Web Presenter Utility software for Mac and Windows. Both AC and DC connections allow redundant power. The body features a 1/3rd rack width design that allows 3 streams in a single rack unit.

Last, but not least, Grant Petty announced a new firmware update for ATEM Mini Pro and ATEM Mini Pro ISO. Version 8.6 adds the ability to stream via a tethered connection with a 5G or 4G mobile phone. The update can be downloaded free of charge from the Blackmagic Design Support Center.

What do you think about the new ATEM Mini Extreme switchers and the Web Presenter HD? Do you do live streaming often? Let us know in the comments underneath the article.