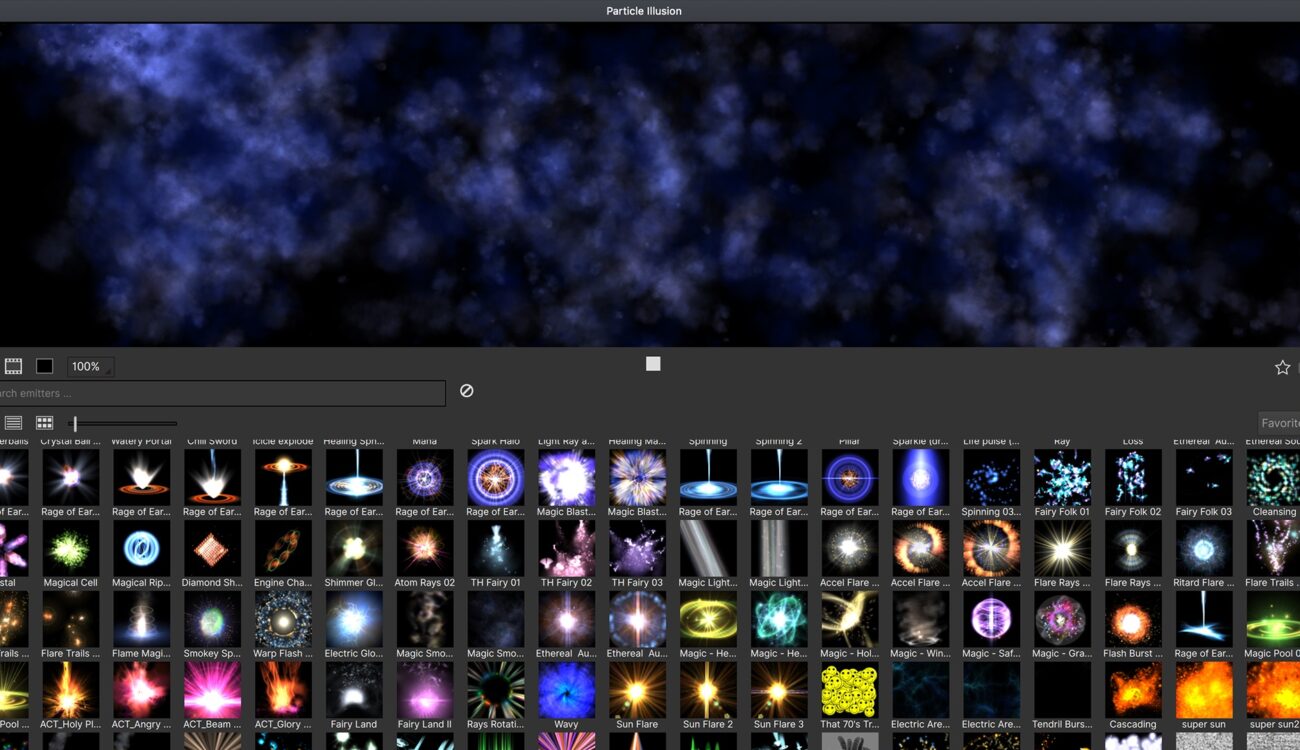 The new Particle Illusion Standalone app from Boris FX complements the company’s plugin with the same name. Available for free, the app enables users to create easy-to-use motion graphics and particles that can be quickly rendered. It includes a large library of customizable particles that can be added to titles, lower thirds, and motion backgrounds.

I suppose most of our readers already heard about Boris FX. Founded in 1995, the company offers VFX, compositing, titling, video editing, and workflow tools for broadcast, post-production, and film professionals. Through partnerships with Adobe, Apple, Avid, Blackmagic Design, Autodesk, Foundry, VEGAS Pro, and other video editing software developers, Boris FX can integrate its software in most NLEs.

The company’s portfolio of plugins includes for example Sapphire, Continuum, and Mocha Pro (planar tracking tool). Boris FX now launches a free standalone Particle Illusion app. What can it do?

Particle Illusion is not entirely new – Boris FX has been offering the software for a while in form of plugin (supporting Adobe, Avid, and OFX hosts) as part of its Continuum package. The plugin stays in the package, but Boris FX now additionally offers Particle Illusion as a free standalone app as well.

Particle Illusion is a real-time GPU-based particle generator. It includes a large library of photorealistic effects like explosions, fire, smoke, dust, snow, fireworks, abstract organic elements, or retro video game-inspired graphics. Users can choose to render out a preset as is or tweak the particle’s parameters to create custom animations. The created particles can then be added to titles, lower thirds, and motion backgrounds.

According to Boris FX, the company released the free standalone app to democratize particle creation and make the app more accessible to artists who might now be financially challenged by the COVID-19 pandemic.

To help users better understand Particle Illusion, Boris FX also released free training to go along with the app’s launch. The training series offers tricks and tips on how to best take advantage of particle creation. It is available on Boris FX Youtube channel and right now there are 18 videos.

It is worth noting that the new free standalone app does not offer all functions known from the Particle Illusion plugin. There is a nice comparison of the functionality on the Boris FX website. In short, Particle Illusion Premium Plugin includes added-benefits such as the ability to view and composite particle animations directly over source footage, utilize Mocha planar tracking, and masking tools, the audio-driven Beat Reactor tool, and more.

Particle Illusion Standalone app can be downloaded here free of charge. There are both Mac and Windows versions available. To download it, you only need to login to the Boris FX account or create one for free.

Particle Illusion as a plugin (Adobe, Avid, Apple FCP X, OFX hosts) is included in the full Boris FX Continuum suite (prices vary by the host) and it is also available as a multi-host Continuum Premium Filter for $295 or within the Continuum Particles Unit for $399.

Do you do motion graphics? Do you have experience with Boris FX? Did you try the free Particle Illusion app already? Let us know in the comments below the article.