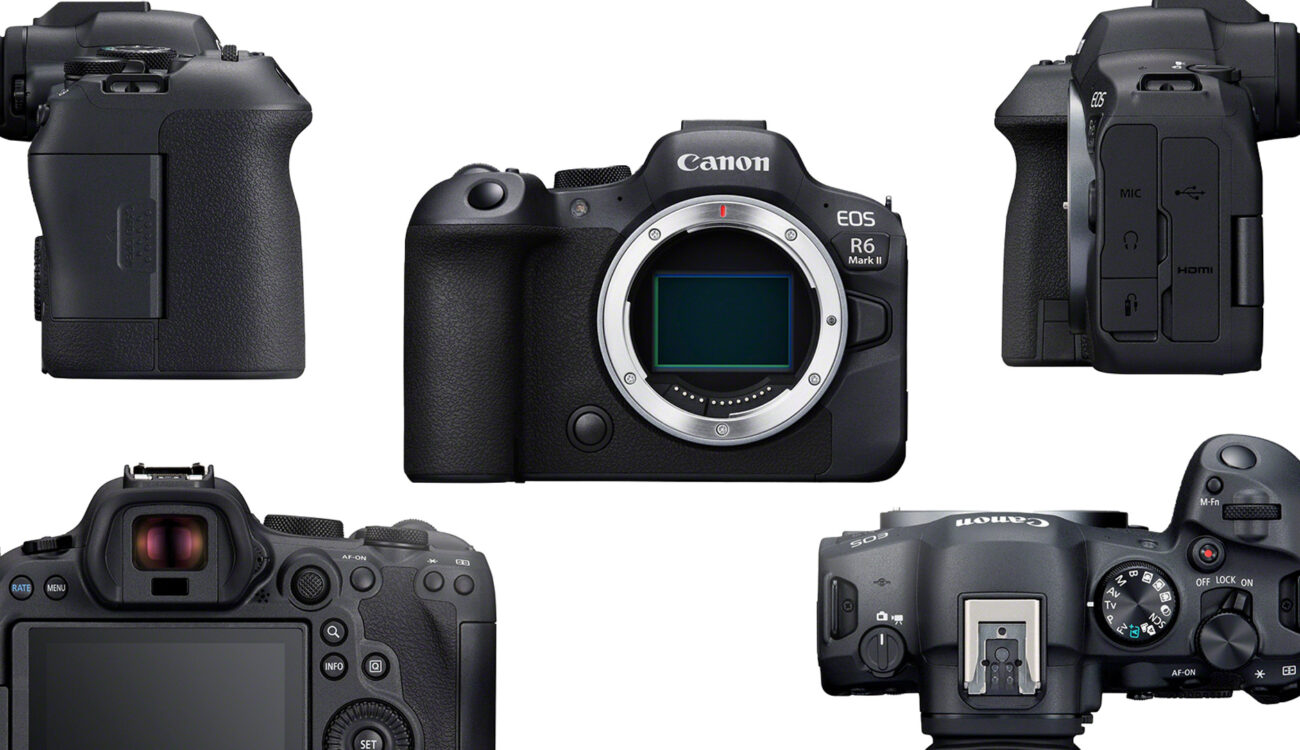 Canon has just launched a new version of the Canon EOS R6: the Canon EOS R6 Mark II. This revamped version features a new Full-Frame 24.2 CMOS sensor and has the same DIGIC X imaging processor found on the EOS R5/EOS-1D X Mark III. The EOS R6 Mark II can shoot internally at up to 4K60p with Dual Pixel CMOS AF II autofocus and externally in 6K RAW via the HDMI output. So let’s take a closer look at it! (A review and footage of the new camera by my colleague Johnnie can be found here)

The Canon EOS R5 and EOS R6 were both launched back in July 2020. At launch, both cameras made a lot of waves online due to overheating issues. Over time, both cameras got firmware updates that added Canon Log 3 and simultaneous recording.

Two years and a bit later, Canon is back with the EOS R6 Mark II, which sports numerous improvements, and most of all, it does not overheat anymore!

The Canon EOS R6 Mark II features a new 24.2 megapixel Full-Frame CMOS sensor. On the inside, it is powered by the same DIGIC X image processor found in the EOS R5/EOS-1D X Mark III.

On the photo side, the EOS R6 Mark II can shoot stills at up to 40fps with the electronic shutter and up to 12fps in mechanical shutter mode. Moreover, in RAW burst mode, it has the option to record half a second pre-shoot.

When it comes to humans, you can specify which eye should be given focus priority. When the EOS R6 Mark II can’t detect the eyes, it’ll focus on the face in the shot instead. So even if the subject you’re shooting turns away for a moment, their head continues to be tracked, and if the head isn’t visible, the camera will go on to follow the body.

Autofocus works in every video mode, even slow-motion Full HD.

To get the best out of the EOS R6 Mark II, you can record externally via the HDMI output on an Atomos Ninja V+ in 6K RAW. Furthermore, it has the well-known built-in Canon Log 3 picture profile and supports HDR via PQ.

When it comes to recording times and overheating issues, Canon claims that you can record “over 40 minutes of oversampled 4K 60p or up to 6 hours at 4k 30p – with the previous 29.59 maximum recording time removed – depending on ambient temperature, memory card space, and battery life.”

Regarding new features, the Canon EOS R6 Mark II now has a 3 or 5 seconds pre-recording mode that you can turn on in the menu. Also, when used with supported lenses – which, at the moment, means Canon RF L zoom lenses and the RF 24mm F/1.8 Macro IS STM – you’ll benefit from focus-breathing correction.

From the outside, the EOS R6 Mark II looks very similar to its predecessor. The same LP-E6 batteries we all know power the camera. Also, the EOS R6 Mark II is compatible with the original EOS R6 battery grip. However, Canon claims that the battery life has been increased by approximately 50% using the LCD screen.

You’ll find a 3.69M dot EVF at the back of the camera that refreshes at 120fps. Alongside this, EOS R6 Mark II has inherited the Optical View Finder view assist feature from the EOS R3.

The EOS R6 Mark II top features a multi-function shoe with a next-generation interface. In addition, this new multi-function shoe is compatible with various accessories without cables – and sometimes even batteries – such as the latest SPEEDLITE-EL-5 flash.

The EOS R6 Mark II has built-in Bluetooth version 5 and Wi-Fi 5Ghz, so you can easily connect it to your smartphone or network to share images. Furthermore, you can control the camera remotely with Canon’s Camera Connect and EOS Utility apps.

Lastly, using the EOS R6 Mark II as a webcam on PC/Mac computers is possible. This feature is now plug-and-play thanks to UVC and UAC compatibility, which is directly built into Windows and macOS operating systems.

What do you think about the new EOS R6 Mark II? Are you considering upgrading? Do you think the recording times without overheating are enough for your shooting style? Don’t hesitate to let us know in the comments down below!