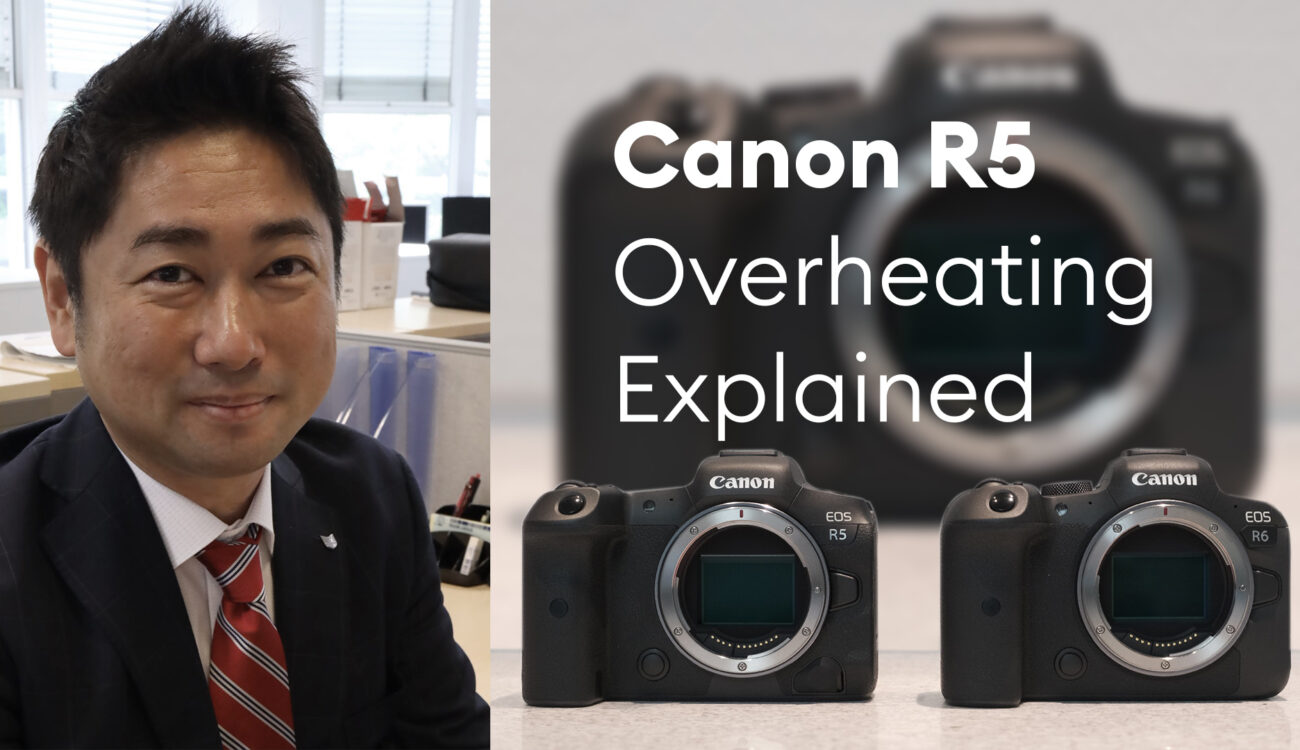 The Canon EOS R5 and EOS R6 are now shipping and as we all know, these new cameras have suffered severe overheating issues when first introduced to the market. The current situation of both cameras became (much) better with the recent introduction of firmware 1.1.1. Yet, we approached Canon with a request for an interview hoping that our questions regarding the situation can be answered. This morning we got a notification that Katsuyuki Nagai-san, Product Management Director of Image Communication Business at Canon Europe, took the time to respond. We do hope that the answers below will shed some light on how product rollout and decisions are being made.

Johnnie – CineD: The Canon EOS R5 is already shipping and there is no doubt that the camera is a technical marvel. What led Canon to introduce this product and don’t you think that introducing such an 8K mirrorless camera is a bit too early?

Katsuyuki Nagai-san – Canon: Someone has to be first, right?

Canon has always been a pioneer in video and stills camera development. The EOS 5D Mark II was the first full HD camera at a time when people asked, ‘why would you want to shoot video with a stills camera?’ We then followed up with the EOS-1D C in 2012, one of the first internal recording 4K cameras, and again people questioned the need for 4K when most were still moving to Full HD.

Someone has to push the boundaries as to what is possible. It’s worth noting that new games consoles support 8K and we are seeing more brands pushing 8K TVs, which will be in the homes of many users in the near future more so than 4K was back in 2012.

8K has been a goal for Canon for a while not just for video but stills/ hybrid shooters too. When we introduced the EOS 5D Mark II, customers who would become what we now know as hybrid shooters had been using separate video and stills cameras. They were asking for one product they could use to shoot stills and video at the same time. With a camera capturing Full HD, the stills result fell short of the 20MP still images the camera was capable of. The move to 4K improved this to 8MP, still 1⁄2 or 1/3 the quality of the still side of the camera. Now with 8K users do not have to worry so much about ‘do I shoot this moment in video or do I shoot stills?’ They can now grab high quality stills from the video footage afterwards.

Johnnie – CineD: When looking at Canon’s official online marketing material, both Canon EOS R5 and EOS R6 were promised to be the “ultimate hybrid camera” and “ultimate content creation tool”. (https://www.canon-europe.com/ cameras/eos-r6/). Also, a “game-changing” tool was mentioned. (https:// www.canon-europe.com/cameras/eos-r5/). Now, looking backward, in your opinion, was this promise to customers fulfilled?

Katsuyuki Nagai-san – Canon: We stand by these claims – the EOS R5 and R6 are not dedicated video cameras, they are stills camera hybrids.

These cameras offer levels of stills performance not seen before. The high- resolution EOS R5 matches its closest competitors, coupled with the speed to match the fastest but lower resolution sports cameras on the market today.

Class leading autofocus, image stabilisation, 10bit recording and Canon Log are game changing features that make people re-evaluate what a mirrorless camera is. When it comes to video, even if we exclude the 8K and 4K 60p functions of these cameras, they are still two of the highest specification video enabled stills cameras Canon has launched to date and are the ultimate hybrid cameras for today.

Johnnie – CineD: Both cameras suffered from overheating issues in video recording and more than that, long recovery times. By introducing the latest firmware update, it seems as if Canon is trying to overcome some of those issues by allowing longer recording and shorter recovery waiting times (until the camera can film again). What exactly is causing those cameras to overheat and what’s the new FW doing in order to help here?

Katsuyuki Nagai-san – Canon: I think we should look at the fundamentals of the whole topic to give a better perspective. The cameras feature cutting edge features squeezed into compact bodies designed to offer weather resistance.

This is where we come to the first of the two governing factors that affect the cameras when it comes to overheating. Holding a very warm object for an extended period has the potential to result in what is known as low temperature burns. Secondary is to protect the internal components of the camera from the overheating. We limit how hot the external body of the camera can get to protect users, which is one of the causes of overheat shutdown. Some heat management must also be applied to ensure the camera continues to operate.

Recording time is controlled by monitoring the temperature inside the camera body and the last usage status information (operating time). With the new firmware we improved the temperature detection system and updated the video recording time control algorithm. The combination of these two points enables the system to increase recording time by taking into consideration things like external cooling during filming.

Also, the movie recording time displayed when powering the camera off/on quickly between recording consecutive short videos (at room temperature) has been improved.

Johnnie – CineD: Lots of information can be found on the internet showing how to “bypass” some of the restrictions Canon originally imposed on the EOS R5 to record long 8K RAW video. Of course, I can understand that you can not refer to “hacks”, so let me ask, is there any danger to the camera or sensor by allowing much longer 8K RAW recording times – longer than what Canon currently allows?

Katsuyuki Nagai-san – Canon: To ensure the safety of users, we control the recording time by monitoring the temperature inside the camera body and the last usage status information (operating time). We do not recommend resetting the camera via the removal of the battery during recording or via dismantling the camera. If the internal memory is reset in this way, the camera may become unusable, temperature control may no longer work correctly, and the camera may overheat more than expected resulting in the power supply components not operating correctly.

Johnnie – CineD: To some people, it seemed as if Canon was trying to protect their professional EOS camera line by restricting recording times. That might have caused some trust issues between potential customers and the company. Is there anything you would like to highlight in order to reassure people that whatever was done, was not intentional but to technically protect the camera?

Katsuyuki Nagai-san – Canon: This is an accusation we’ve seen before which belongs on the conspiracy theory pile. It is simply not a sensible business idea as users are more likely to switch to competitor systems than buy a much more expensive camera to get a certain feature.

There are factors that govern what a camera can and cannot do, the primary of which is the components used based on the cost of the camera. Making a camera that can do everything would require higher resolution viewfinders, bigger buffers, faster processors to handle the data, faster card buses to write to cards etc, all components which typically cost more.

It is important that we evaluate the primary customer for each product and decide what features would be required by that typical user. We do not ‘cripple’ our cameras, our aim is always to focus the product better to the typical user.

One issue manufacturers face is feedback that cameras are difficult to use and some people prefer to use their smartphones. If we follow the model of just making the same camera but cheaper, that does not tackle the issue of making a camera easier to use. We aim to make each model of camera more intuitive to use, without excess menus or features that may hinder or discourage use rather than expand it.

Johnnie – CineD: In regards to the EOS R6, are we going to see any future improvements in encoding quality, allowing All-intra on top of IBP or even 4K RAW recording for example?

Katsuyuki Nagai-san – Canon: We are constantly listening to customer feedback. EOS R6 sales have only just begun so we need to spend a little time listening to understand what is needed now the cameras are in the hands of end users, before making any further plans on updates for the EOS R6 over those we have already announced.

Johnnie – CineD: At the end of the day, what should we expect from the EOS R5 and EOS R6 cameras? Will you improve recording time in the near future (and keep the same video quality), or are we approaching the end of improvements and those 2 cameras will continue to be restricted as they are today?

Katsuyuki Nagai-san – Canon: We plan to keep enhancing these products but as explained in my previous answer, there are limitations that cannot simply be overcome via a firmware update.

I would like to Thank Katsuyuki Nagai-san from Canon Europe for taking the time to answer our questions. I also hope that you guys will take the time to comment below. Let’s keep the conversation respectful!