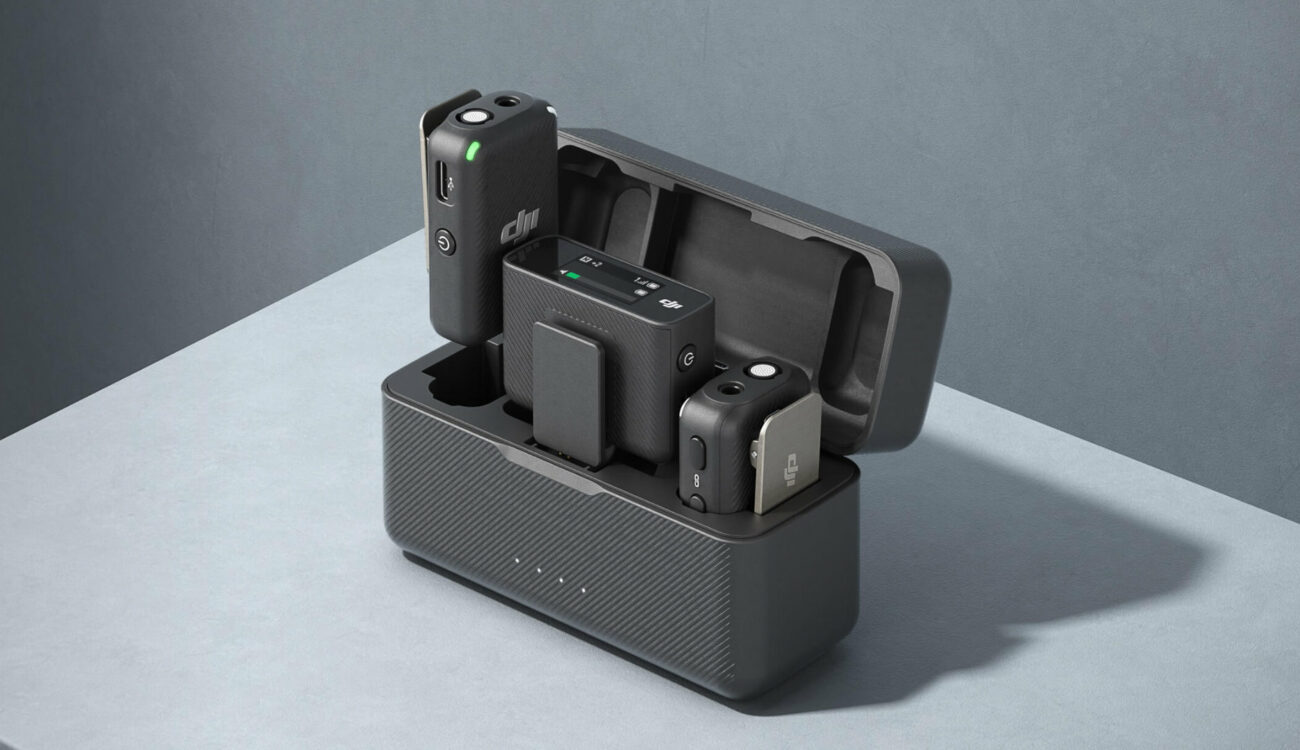 DJI didn’t stop at drones, and it didn’t stop at action and cinema cameras either. They’re continuously expanding their business fields. There was already a wireless mic for the DJI Pocket 2, but this is the first standalone wireless microphone kit made by DJI compatible with other devices.

It features two small transmitters in a similar form factor like the RØDE Wireless Go. Both transmitters have built-in microphones and a 3,5mm mic jack.

The audio signal transmits over the 2,4GHz Band to the receiver. DJI claims up to 250m/820ft wireless range.

It can be used in combination with cameras, smartphones, and laptops. For this, the receiver has a 3,5mm line out jack, a 3,5mm headphone jack, and a USB-C port for connecting with smartphones or laptops.

The transmitters (not the receiver) have recording functions with 8GB internal storage each. This allows for up to 14 hours of 24-bit lossless audio. Audio files will be split into 30min clips, and when storage gets sparse, the earliest audio file will be overwritten. While this requires less manual operation of formatting and deleting content, this could be unfortunate when an important file gets automatically overwritten without your knowledge. Also, 8GB internal storage without support for removable storage forces you to copy all files directly from the device over USB. But as there is no real information about codecs or other recording details, I don’t think this is the main use case of this device.

You can turn on a backup track which records an additional audio track with the volume reduced by -6dB. This could come in handy when unexpected loud sounds occur and you don’t want the audio to clip.

Batteries are built-in and are supposed to last 5.5hrs and 5hrs for the transmitters and receiver, respectively. All three devices come in a compact charging case, which extends usage to 15 hours.

The set reminds me of the Hollyland Lark 150, as it is also a dual wireless system in a charging case.
While the Lark 150 has 100m of wireless range and the RØDE Wireless GO II has 200m, the DJI Mic claims to be even more capable.

Most of the recently released affordable wireless audio systems rely on the 2.4GHz band, as it is license-free across the globe and the components are readily available, as WiFi and Bluetooth use the same band. But this is also the downside, as it is already a heavily congested frequency, and in densely populated areas the wireless range could decrease by a lot.

DJI got really successful with their lineup covering a lot of drone types and sizes. With their expertise in gyroscope technology they could excel in the gimbal market. With their know-how of camera systems on their own drones, they got into the portable and action camera market, which just saw an update with their DJI Action 2.

Recently they stepped it up a notch with a full-blown cinema camera with a built-in gimbal, the DJI Ronin 4D ( video review | panel discussion ). With the DJI Mic they’re continuing to offer even more diverse technology in the multimedia market. One connecting factor between all of these devices DJI made so far is wireless technology, where the company excels at.

Find more information about the DJI Mic on their site: DJI

What do you think about compact wireless mics like these? And do you think DJI will continue to extend their business fields? Let us know in the comments.