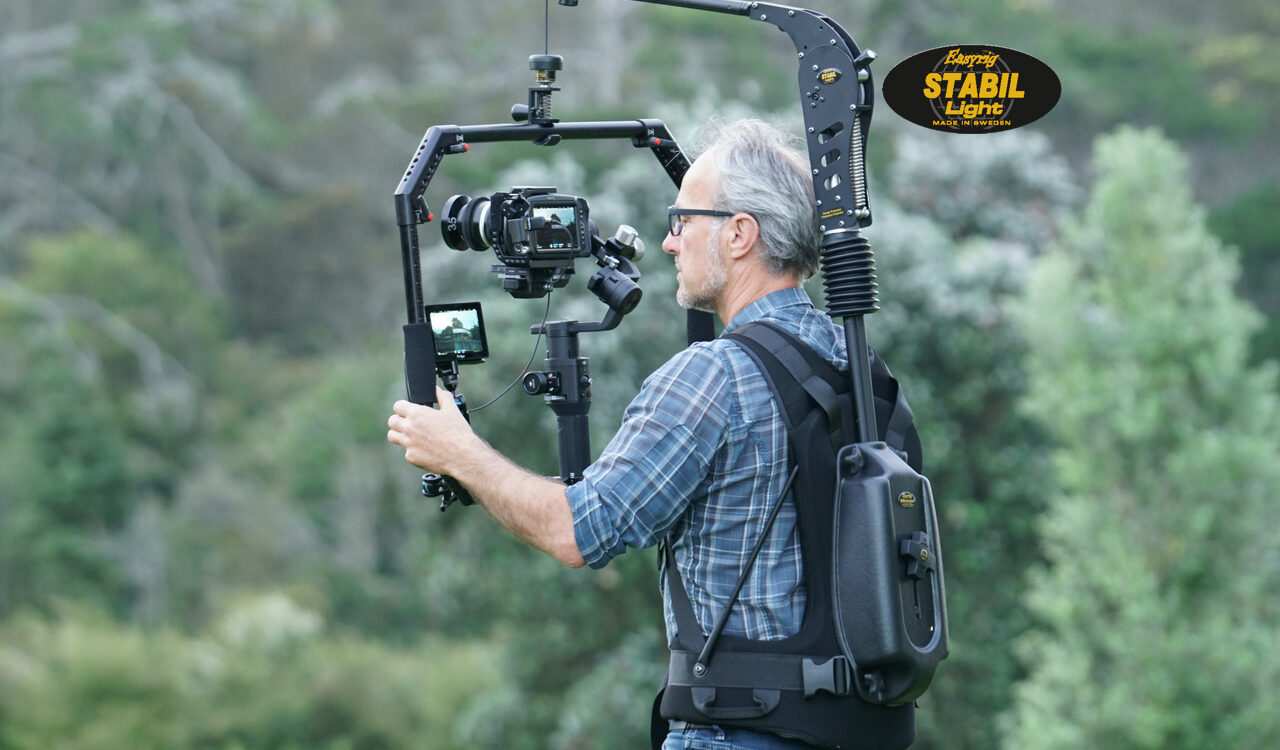 Easyrig combined two of their most popular products together and created the Easyrig Minimax STABIL Light – a camera support vest with a spring-suspended stabilization system for cameras up to 7kg/15.4lbs.

The Easyrig Minimax has gotten quite popular among those who don’t need the bigger brother – the Vario 5. It features a lower maximum payload – 7kg compared to 17kg (or 25kg in the strong variant) – and a much more affordable price.

For those new to Easyrigs: It’s a camera support vest, which takes most of the weight of your camera off of your hands and puts it on your upper body and hip, thus reducing strain on your back.

The STABIL was initially presented as the Flow Arm a bit more than two years ago on NAB 2019. Additionally to the weight distribution, the STABIL allows dampening vibrations and unwanted movements during a camera move.
We spoke with founder Johan Hellsten back then, who told us about it in his incredibly entertaining way about their new product (seriously, it’s one of my favourite videos on our channel, his energy is unbeatable):

The STABIL received quite a warm welcome. Compared to the Flowcine Serene, this was a solution from the same manufacturer who also produced the vest.

While it supported comparably heavy camera systems and did its job very well, it was still quite expensive for many users.

It supports pretty much all the features of its big brother. A big spring on the top smoothes out unwanted movements during walking, thus ensuring smoother shots.
The payload can vary from 2kg/4.4lbs to 7kg/15lbs and can be adjusted via the two knobs on the backside.

Out of the box it’s useful for getting steady handheld shots, for usage with gimbals their optional EasyTilt accessory is recommended. It enables easy tilt and pan movements, which are partly restricted without the EasyTilt.

For Minimax owners it’s important to note that you cannot upgrade your existing system. Easyrig asks owners interested in an upgrade to contact them directly for more information.

If you’re as delighted by Johan and his team as me, you will enjoy their video introduction of the STABIL light:

The Easyrig Minimax STABIL Light (already assembled Minimax + STABIL light combination) is available now for $2,625. This is considerably cheaper than the Vario 5 + STABIL combination (around $6,500), but still around double the price of the Minimax itself.

Would you consider getting the Easyrig Minimax STABIL Light? What do you use to get stable footage? Let us know in the comments below.