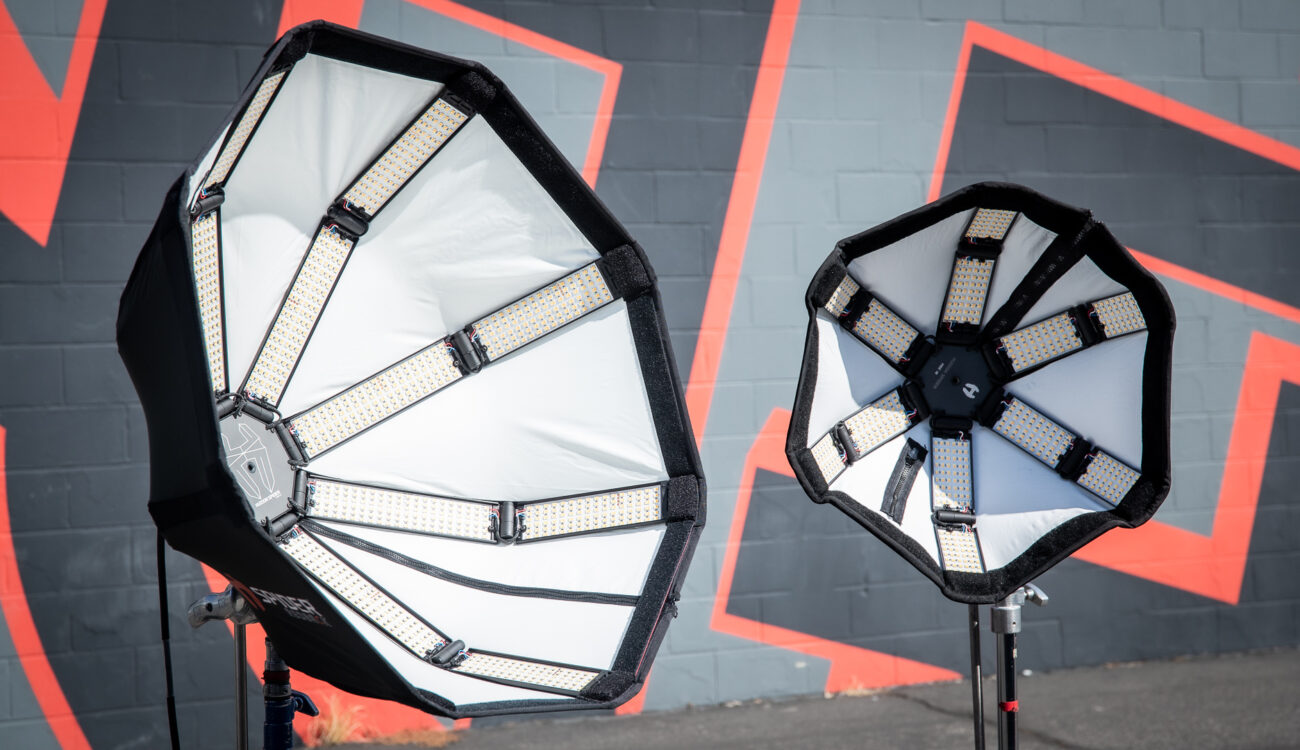 Hudson Spider, based out of California, has two LED fixtures with a unique spider-like design. My colleagues Johnnie Behiri and Adam Plowden first reported on the new bi-color Hudson Spider Redback at IBC in 2017 and since then the company has launched a whole host of new accessories along with a smaller light called the Mozzie. Recently I spent a few weeks with both lights and my review is below: 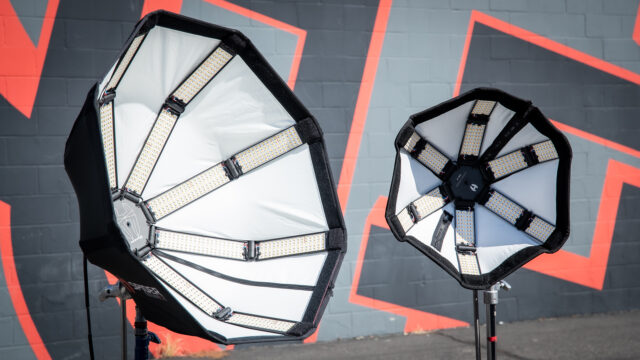 Redback on the left and Mozzie on the right. Image Credit: Graham Sheldon

Let’s touch on the elephant in the room first: the Hudson Spider Redback (named after an admittedly terrifying-looking spider) will set you back $6,290.00 for the “basic kit”. For a time you could buy “a la carte” items off the Hudson Spider website and you could potentially build a smaller and, in turn, cheaper Redback package. For now, though, only the kits are available and that puts this Bi-color light right at the top of the price list in this category and means it will be a rental-only item for many. Remember you aren’t getting RGB here. However, how often are you really using the full feature set of your favorite RGB panel? I’d argue that you’re most often shooting either Tungsten or Daylight or somewhere in-between and for that the Redback really shines.

Another answer to the question of price is the new Hudson Spider Mozzie. A basic Mozzie kit will only set you back $3,615.00 — cheaper than the Redback, but still a premium price point for a Bi-color light. The Mozzie (an Australian slang term for mosquito) is essentially the same design, much smaller, can be charged by a battery and travels easily, but overall I never found the Redback that cumbersome to lug around to begin with. 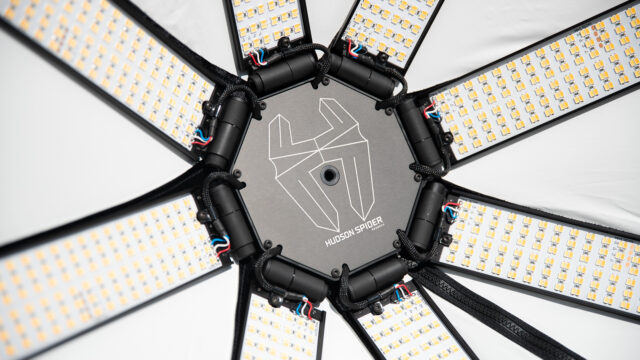 Image of the center of the Redback with parabolic backing attached. Image Credit: Graham Sheldon

The first thing they tell you is to never point a light directly at a subject. I’ve broken that rule a few times over the years for a variety of reasons, but I found the Hudson Spider Redback truly produces excellent light quality without modifiers of any kind. You simply can’t say that about many of the fixtures out there — especially most LED 1×1 panel lights. In many situations (especially outside) I was able to simply place the light on a C-stand and use it to help shape the light hitting an actor.

Hudson Spider pushes the Redback as having a soft wrap-around quality and that is absolutely true. For anyone shooting interior beauty or fashion work you really can’t go wrong with this light as your key. Bouncing the Redback into a Westcott branded umbrella especially makes for a beautifully soft flattering key light. Obviously all projects don’t call for soft Rembrandt light hitting your subject, so keep in mind that the old rules of “there is no single perfect fixture that does everything” still apply here.

I tended to use the direct parabolic backing (pictured below) for most of my shooting, but occasionally I did add the included magic cloth or half grid depending on the shot and overall ambient level. Like all diffusion, you’ll lose stops of light in exchange for added softening of the source. 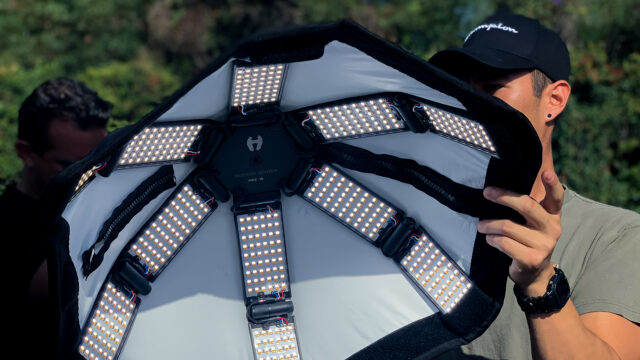 After a few shoots and overcoming the normal learning curve I’d say that the Redback takes an average of 5-minutes to setup. It’s not the fastest setup time, but there are plenty of other fixtures that are easier or harder to put together out there. At first, there is a fair bit of education required to get your G&E team up to speed on how to organize the light into shoot-ready mode, but Hudson Spider has a great Instagram account and they’ve put out a few useful YouTube videos too get you going. The least intuitive part of the setup is expanding the light from travel mode to fully extending the arms. While they’ve included a helpful laminated diagram in the kit I found the act of expanding the light to take a little practice.

It isn’t a secret that the Redback & Mozzie are a collaboration of sorts with Litegear (creators of the popular Litemat + & Literibbons). In fact, if you’ve ever used a Litemat you’ll notice many similarities from the look and placement of the LED diodes all the way to the ballast. I’ve loved using Litegear products for a few years now and knowing that the internals are great already gave me a high level of trust in the quality of light coming out of both Hudson Spider fixtures. It will be interesting to see if the RGB Spectrum Tech from Litegear will be introduced in a Hudson Spider product at some point. 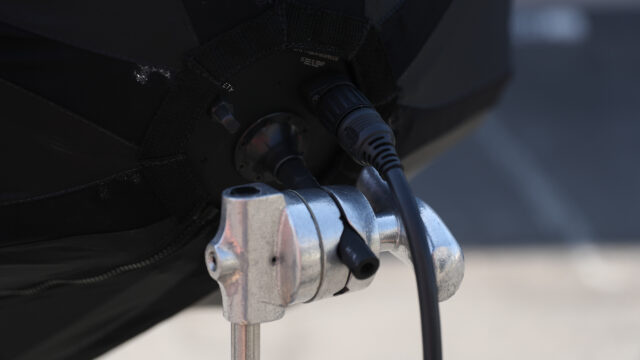 The mounting pin is close to the power cable. Image Credit: Graham Sheldon

Personally, I had concerns with two aspects of the design. First, the rear cable is very close to the mounting pin (pictured above) and it made moving both lights around a little tricky. Hudson Spider’s answer to this is an included handle, but for most shoots I need to have the pin mounted to the light for use on stands and can’t use the handle. Secondly, having the LED diodes exposed (see the below image) make me a little nervous considering the price point. I would have liked to have seen a similar layer of plastic to the ones that Litegear uses in the Litemat added over the diodes for extra protection from the elements. 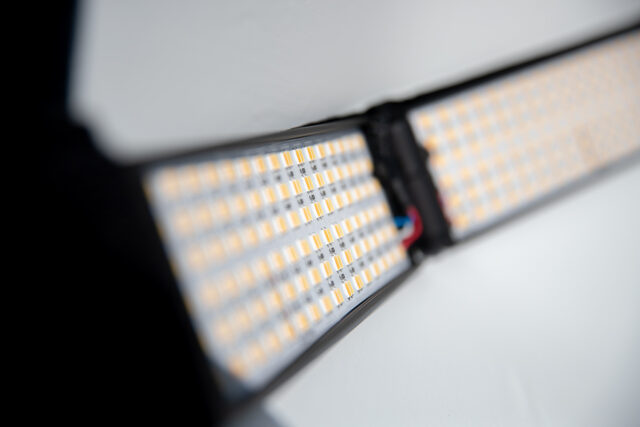 The LED diodes are exposed with no plastic covering. Image Credit: Graham Sheldon

The Redback can’t be battery powered with the included accessories. Perhaps one day that will change, but for now, only the Mozzie can take V-mount or Gold Mount batteries. Obviously this is important to note for shoots where you won’t have access to wall power or a generator.

I used primarily the Westcott umbrella, parabolic backing with diffusion and honeycomb grid while filming, but Hudson Spider also has several other accessories available including: 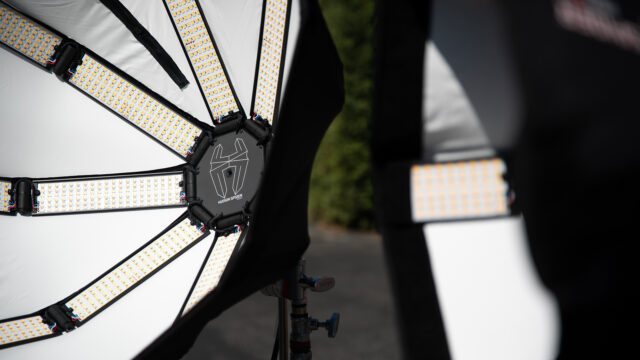 The Redback (pictured on left) gives plenty of punch during exteriors depending on the weather. Image Credit: Graham Sheldon

Hudson Spider is making a strong case for the title of the perfect key light. The quality and output out of the Redback really is outstanding. For smaller shoots where you have more control over the ambient light levels in your space, you’ll find the Mozzie well suited for most applications (especially interviews or closeups). Hudson Spider is already seeing success with the Redback on large studio pictures and with rental houses and I’m excited to see the company continue to grow the design and the ecosystem of accessories around their lights.

What do you think? Would you consider adding the Mozzie or Redback to your kit? Comment below!