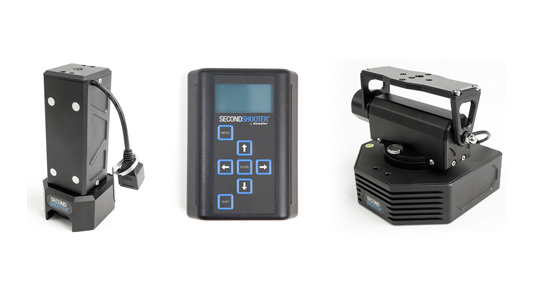 Kessler has been the pioneers of motion controlled camera systems for as long as I’ve known. The CineDrive system is a digital, modular system, residing as Kesslers flagship product line for motion control. The Second Shooter, which Kessler has now just started fulfilling orders of, takes the important aspects of the CineDrive, and packs them into a simpler more affordable package. The Kessler Second Shooter consists of up to 3 components (depending on which 1-3 axis package you choose) – The controller module, slider motor and tilt/pan motor.

The controller is the brain of the system, offering up a simple easy to use digital interface with large, easy to press buttons (important for remote, glove wearing timelapse shooters out in the cold wilderness). The controller offers 3 Cat5 ports for each respective axis, as well as power, an expansion port (for joystick module etc.) USB for firmware upgrades and a final port for controlling your camera via an intervalometer for time lapses.

The Second Shooter is a keyframe based system for ease of use, simply set your start and end points and program the time it takes between these. It’s designed primarily for 3 types of shooting, real-time, stop motion and time lapse. Its looping function also makes it useful for work with post production. The slider motor features a quick change pulley system, with a variety of torques dependent on your payload, slider size and shoot type.

The more sophisticated CineDrive system was greatly thought out, and it’s nice to see some features filter down from the flagship line. I loved how each module snapped to each other via magnetic connections; expect a similar system for the controller mount and a battery solution.

Speaking of batteries, there’s no current dedicated battery pack for the Second Shooter (until the aforementioned magnetic pack is released). The system ships with an AC adaptor as standard, also Kessler recommends their current portable solutions as well as offerings from Bescor.

If you haven’t already seen it, do check out this fantastic video by Joe Simon utilizing the Kessler Second Shooter: