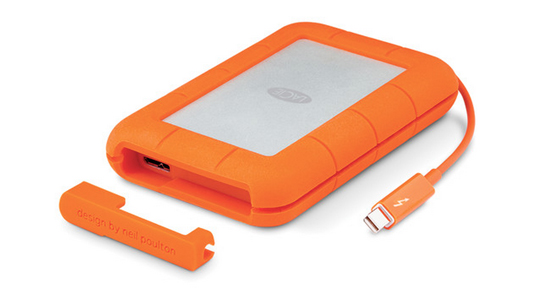 LaCie has released a re-vamp to its popular Rugged line. The portable hard drives now provide up to 2TB of storage, with a convenient permanent Thunderbolt cable.

The LaCie Rugged hard drive has been quite popular with filmmakers, offering storage for in-the-field media backup. There’s been a few flavours of the line over the years; a fairly un-changed cosmetic design with variants of capacity and peripherals.

Now, they’ve redesigned the Rugged with a new in-built Thunderbolt cable, which wraps around the edge of the hard drive and tucks into a supplied cover.

Just like the previous, the new Rugged also includes a USB 3.0 port for further connectivity (which is naturally down compatible with USB 2.0).

The Rugged is available with both an SSD and spinning disk drive, the former up to 500GB and the latter in 1TB and newly released 2TB form.

The drives boast Thunderbolt speeds of up to 387 MB/s. Speaking from experience, this is only available on the SSD version; the spinning disk caps the speed of the product. Therefore the speed of Thunderbolt transfers on the 1TB and 2TB versions are of no real difference to that of USB 3.0.

LaCie on the durability of the Rugged:

“It’s MIL-compliant, which means that data is protected even during accidental drops of up to two meters (6.6 feet). During transit, connect the removable cover to provide IP 54-level protection against dust and water.

Whether the LaCie Rugged takes a jarring bicycle ride or gets splashed by a mud puddle, you stay confident that your data is still accessible. The SSD version goes a step further for the ultimate in resilience against vibration and shock.

Both versions are tough enough to be shipped for reliable delivery to clients or partners. Included software even protects your files from prying eyes with AES 256-bit encryption.”

Speaking of reliability, it’s worth reading reports by online backup vendor Blackblaze on the failure rate of industry drives. for reference, LaCie utilize Seagate drives, which actually came in last place in the Blazblaze report.

All Ruggeds ship with a replacement end cap (in case the original gets lost) and USB 3.0 cable. Both spinning disk models are available now from B&H, I’ll update this article upon release of the SSD version.