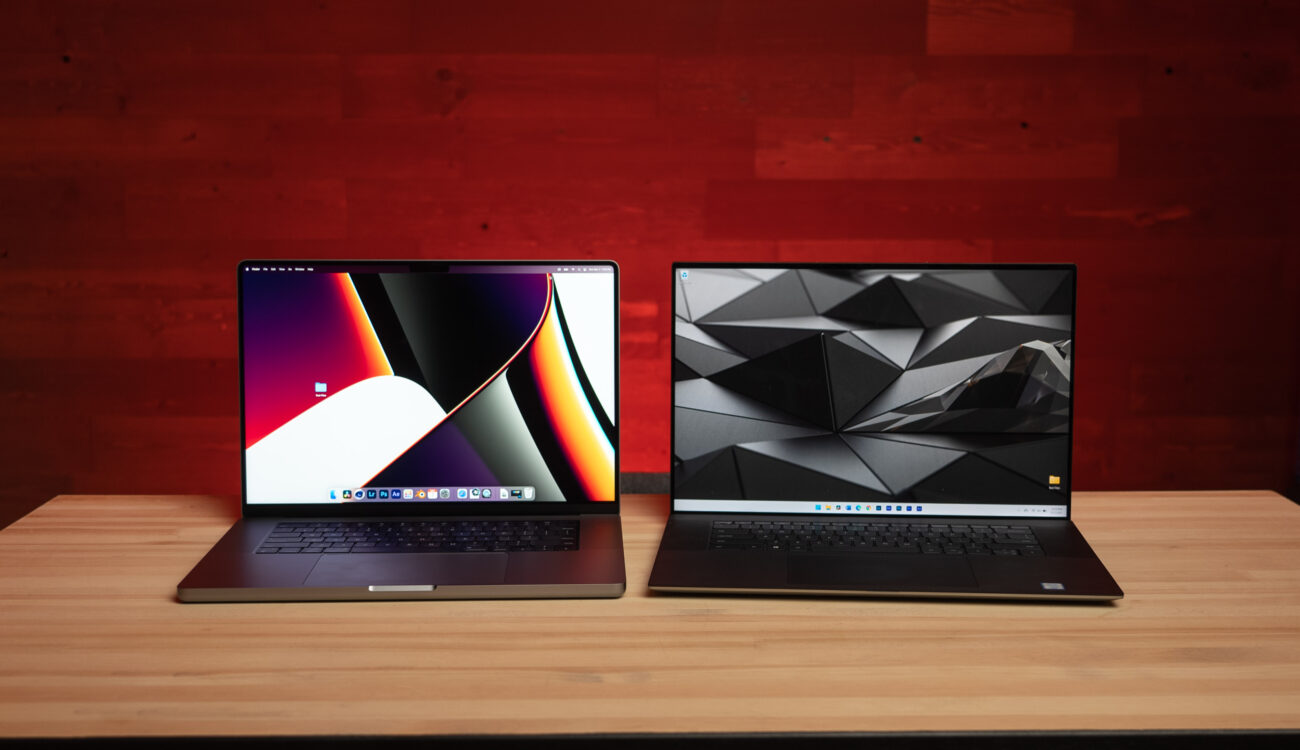 This is a guest post by Drew Geraci, cinematographer and editor, well-known (among other things) for his timelapse intro sequence of Netflix’s “House of Cards”. We talked to Drew a few years ago as part of our talk show “On the Couch”, you can find part 1 of this talk here, and part 2 here. In this article, Drew talks about putting Apple’s new MacBook Pro M1 Max head-to-head against the Dell Precision 5760 in some render benchmarks.

Why I compared these two models of computers

My main reason for wanting to see how the new Macbook Pro M1 Max compares to the Dell Precision 5760 is because long ago I use to be an Apple user, that was before they lost me due to poor performance. Ever since 2013 when the Macbook Pro trashcan launched I decided to make the full switch to Windows based computers so I could get the performance I paid for and not just a paperweight with an Apple logo on it. As a cinematographer and timelapse photographer having a system that can handle and process boatloads of data, including ultra-high resolution clips like that of the Sony Alpha 1 or RED 8k Helium is a necessity for me, and I hate poor playback of files, especially if a director or client is viewing them in real-time with you. Apple just didn’t offer the type of power I was looking for back then or even up until October of this year. With the introduction of the new M1 Max chips though, there is a clear increase in performance over previous Macbook Pro systems, even from a year ago and thus I decided I would give the Macbook Pro another try and see how well it compared to my professionally oriented Dell Precision 5760.

I should stipulate that I am a brand partner with Dell, however I made my assessment of both systems at face value. I tried hard not to be bias towards either laptop and I think the results in the video speak for themselves.

There’s always been this kind of back and forth (almost hate culture) with Windows and Apple users mainly because one side always thought the other side was better or faster. Without spoiling anything from my review, that just isn’t the case anymore. If anything, I think both of these systems will hopefully unite users in understanding that you’ll actually get what you pay for now and everyone is a winner.

My Initial thoughts on both systems

While Design and form factor don’t necessarily come in to play for me (since I only care about power) I will say that the new MacBook Pro’s design is pretty boring and almost identical to how it looked 10 years ago. The precision however looks/feels much more modern and even though it’s a 17 inch laptop, it fits perfectly into a 16” case with ease. One of the main reasons I like it so much is just how portable it is (on top of being super powerful). The new Macbook Pro isn’t terrible (design wise) by any means, but it is a bit bulkier and less elegant than its previous versions. What I do love (about both systems) is that they offer a ton of port options, including the SD card reader which makes transferring photos on the go a dream. It also means I don’t have to bring a lot of extra dongles with me on the road. Everything is just centrally located on both systems and they both just work.

As a cinematographer and editor, finding a screen that can be color calibrated on the go can be a challenge. You want to ensure that the color you’re seeing is the color that will be going to the client if you’re delivering content when away from the office/studio. My first impression of both screens is that they are gorgeous. They both look stunning when viewing and playing back 4k content and each produces lovely rich tones. During my test however it became apparent that there was no way to really calibrate the Macbook Pro monitor and because of that it gives me doubts that it’s properly calibrated or might become less calibrated in the future. With the Dell Precision on the other hand, I was easily able to connect my Datacolor Spyder X Pro color calibrator and in about 2 minutes I had my screen calibrated and confirmed calibrated by the hardware. Because of this you can see a stark difference in the playback color of the monitors, whereas the Macbook Pro added a tint of yellow to the screen and the Precision looked properly white balanced. Overall both screens are lovely and users will enjoy the quality of the viewing experience.

This was the main reason for testing the systems. I honestly didn’t expect the Macbook Pro to perform as well as it did solely based on past experiences with the previous Macbook Pro systems. I was wrong though in my pre-trial assessments. The Macbook Pro has 100% stepped its game up with the M1 Max chip and it honestly made me take a second look at the system. In pervious versions I would see performance differences (from my Windows based laptops) of anywhere from 40% to as high as 60%. In this case, Apple has finally closed the performance gap and in some instances beats out the Dell Precision, especially when it comes to the rendering of After Effects and Fusion clips inside of Davinci Resolve. That was the most surprising difference for me. I for sure thought that the NVIDIA RTX A3000 would be massively ahead of the M1 Max chip in both of those programs but in the instance of complex AE scenes, the Macbook Pro beat the Precision by over a full minute. That may not seem like a big deal, but if you’re rendering out massive sequences that end up taking an hour to render you’ll definitely want the faster machine. With that being said, Dell does offer the 7700 series of laptops that allows for the A5000 GPU which is an absolute beast and in my tests with it would likely outperform the highest tier Macbook Pro by a considerable amount, but the cost also goes up exponentially and it wouldn’t be fair.

Both systems, after using them side by side, perform the way you would expect a $6000 laptop to perform. Like absolute workhorses. They both playback high-resolution footage in realtime, allow for realtime VFX to be applied and render out those shots in just a matter of seconds. There are no losers in this comparison.

There’s always been a healthy amount of back and forth between laptop/computer manufacturers. I think because of the introduction of the unified M1 chips we’ll see folks like Intel, NVIDIA and AMD utilizing similar techniques to help boost the performance of their own chips driving up performance again. This means that both Apple and Windows users are going to benefit greatly and we all win in the end.

What do you think, what’s the computer you’d go for, for your workflows? Let us know in the comments below. Andrew 'Drew' Geraci is a passionate and award-winning photographer/cinematographer who has been in the media industry for over 15 years. He's a master of timelapses and behind the creation of the iconic "House of Cards" opening sequence.