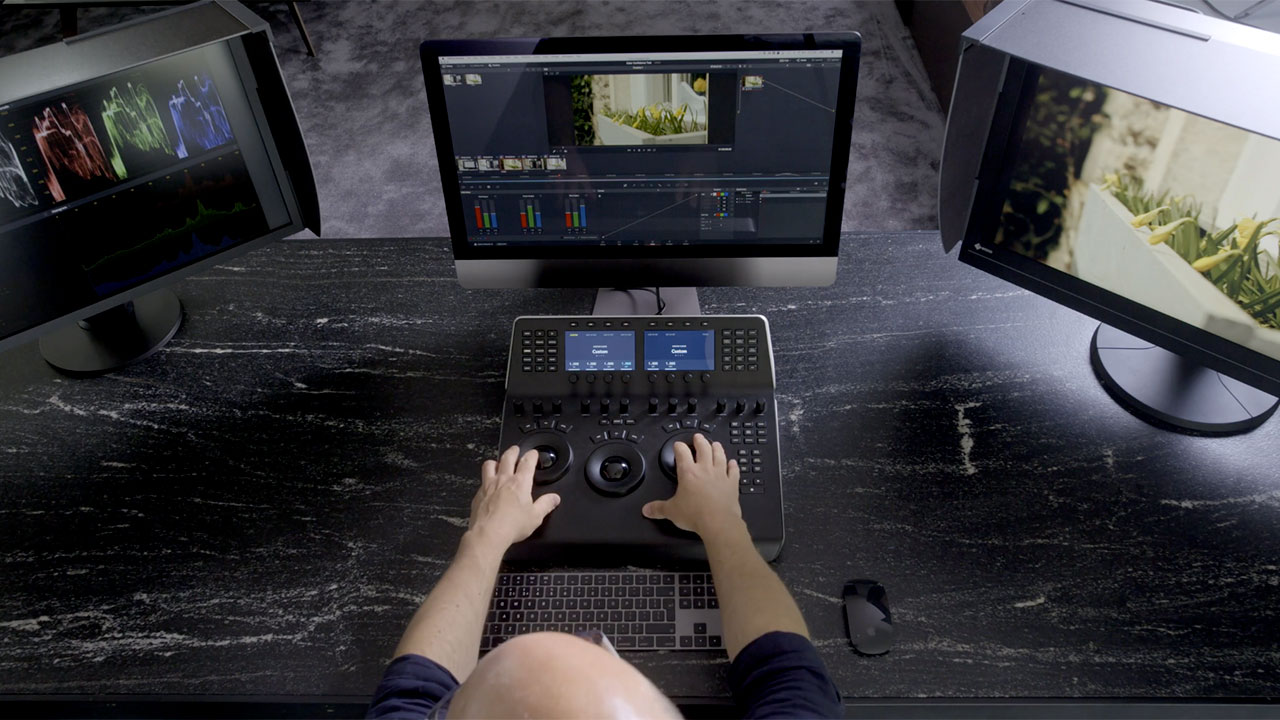 MZed has just released a new and extensive course on color grading by Ollie Kenchington. This new course is the follow-up to the highly acclaimed “Directing Color” course and aims to give a more in-depth perspective on a colorist’s actual work. Here’s what you need to know.

The course starts with an hour-long, very in-depth hands-on tutorial to setting up your grading suite: monitor setup, display choice, appropriate ambient lighting for the room you are working in, as well as neutral grey paint, which of course has to be pigment-free – nothing is left to chance here and Ollie patiently takes us through the whole process.
As we progress, we get into working with Resolve, starting with a module on contrast adjustment and one on color balancing (what other courses might consider to be primary and secondary adjustments). Here, we are taken through basic adjustments with lift, gamma and gain controls, the additive RGB color model, and color and luminance perception in general. We also learn how to utilise the scopes and use them to double-check our perceptional biases. All of the hands-on examples shown here are punctuated time and again, as are all the other modules, by short on-topic-interviews with industry professionals like director/cinematographer Brett Danton, colorist Toby Tomkins, cinematographer and fellow MZed educator Philip Bloom, director Sam Buchanan and Oscar-winning make up artist Peter Swords King. 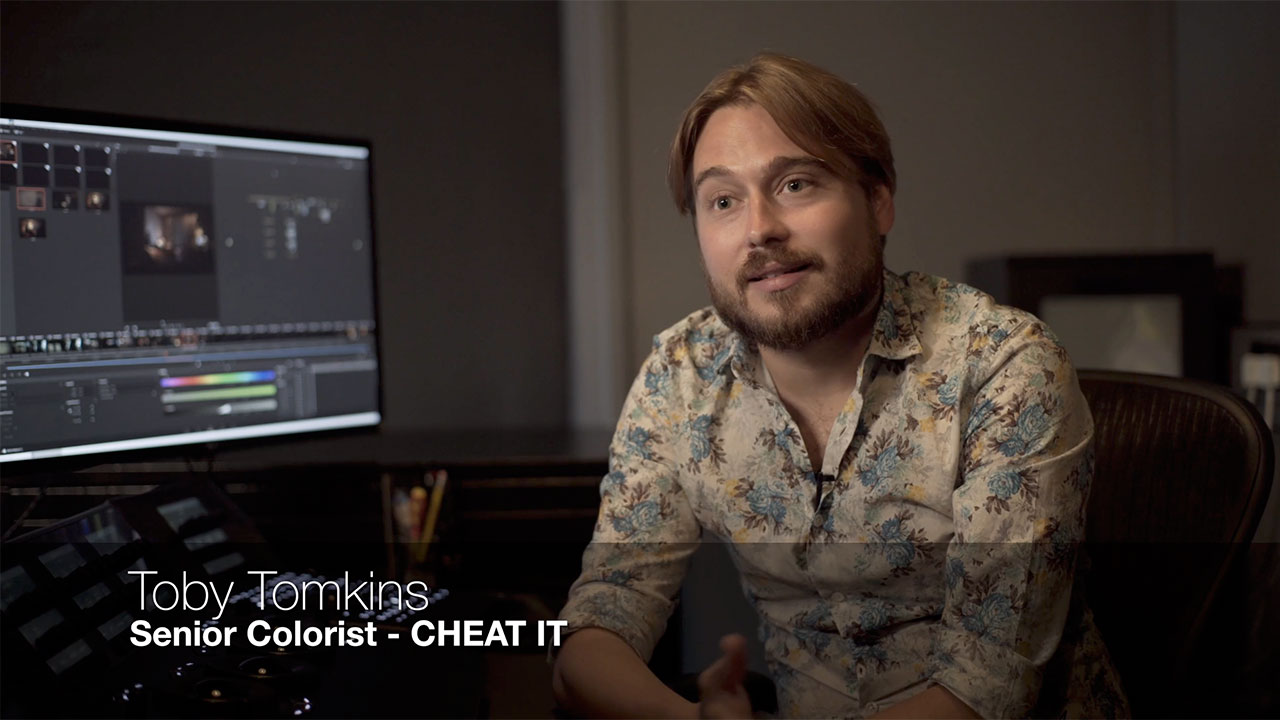 Following our basic color corrections, we start working on more advanced topics like continuity (between different cameras, as well as between different takes of the same scene) and skin tones. Ollie gives interesting insights into his workflow, using versions and groups, while utilising color checkers to make matching relatively easy.
Finally, we get into the more creative parts of the color grading process with modules on creative looks and film emulation. Ollie goes into some detail here, showing us when, where and how apply LUTs, how to build your own look and how to utilise tools like FilmConvert and Resolve’s own film grain effect.
To top it all off, we get a module on working with RAW and how to grade for HDR output.

Who is the course for (and who is it not for)?

In my opinion, the course would suit two primary groups:

This makes sense, as for total beginners and casual colorists it might seem a little far fetched to invest a few thousands into getting a workable reference monitor and kitting out a proper coloring suite with neutral gray paint and a 6500K light bulb. On the other hand, if you know the van Hurkman books on color correction by heart and only start having fun when you’ve created 30+ nodes per image, then this course might also not be for you, as you will have heard most things mentioned here before. That said, the interviews with industry professionals might be interesting to you even then.

What works and what doesn’t

I have to say, with regards to other offerings on the market right now, this course is incredibly well put together. Ollie Kenchington gets it right, offering just the right level of theory and background knowledge to be effective, without dragging on about theoretical stuff for ages. His calm and considered presentation nonetheless never gets boring or lifeless, just checking off topics because they are on the list. Rather, you do feel that somebody is teaching you, who not only takes color grading very seriously, but also enjoys the process.
The footage used in the examples is of very high quality throughout and the examples are very balanced, being taken from commercial, documentary but also narrative work alike. The same thing goes for the industry interviews. These, of course, provide a very valuable professionals’ perspective, but they also give entertaining insights into the collaboration process with directors and the day to day work of being a colorist.
This is not the kind of course that will teach you the ins and outs of every facet of Resolve, rather it aims at being somewhat software-agnostic – this is not a bad thing, just something to know going into it. The module on creative looks could just have been a tiny bit longer for my taste, giving a peek into a little more advanced workflows, with more than just serial nodes. In fairness, this might have been a little too much for this particular course, though.
The main thing I actually missed from the course was some seriously bad footage. Most shooters probably won’t be at the level of Brett Danton, working with a production crew, or Philip Bloom, so there might be a shot with seriously blown highlights or noticeable shadow noise here and there. While I understand that including this might bear the danger of encouraging some people’s “fix-it-in-post” mentality, it would nonetheless have been interesting to see just how much you can reasonably expect to achieve when something does go horribly wrong.

My last gripe is one with MZed, not really this course in particular (though it does happen here too): the usage of music. While I do understand the impulse to try and maybe keep viewers more engaged or interested, I have to say the way it is utilised doesn’t work for me personally at all. Rather than just having the same confidently playful elevator tune play constantly underneath everything that’s being discussed, I’d strongly suggest only using music to punctuate important parts, or for transitions.

That said, I enjoyed the course thoroughly and was able to learn quite a few things that will surely come in handy when grading my next project. All in all, it was a great course that I can recommend whole-heartedly to anyone (in the two groups discussed above) interested in color grading.

The course is available now and Mzed is celebrating its launch by offering a chance to win some cool prizes in addition for watching the first module of Ollie’s Mastering Color for free! Head to their competition page to learn more.

FULL DISCLOSURE: Ollie Kenchington is my fellow contributing writer at cinema5D. However, I had my Mzed membership long before joining cinema5D and this is my honest evaluation of Ollie’s course.

What do you think about this course? Does it fit your interests regarding color grading? Would you be interested in taking it? Let us know in the comments!

Lens News
Leitz Joins the L-Mount Alliance – What Does That Mean for Filmmakers?
Yesterdayfiber_manual_recordAndrew Thibault