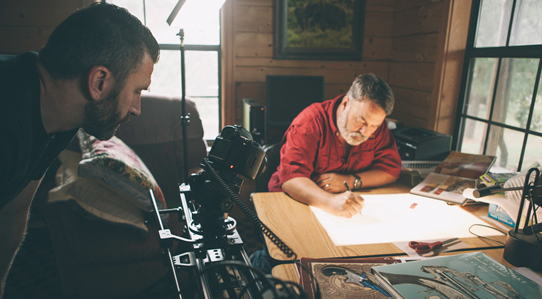 It can seem like an obvious question sometimes, but do you think about the motivation behind camera motion?

As the modern day filmmaker, never before has it been so accessible to make beautiful looking images. From large sensor cameras down to 3-axis stabilizers, we’re literally spoilt for choice when making small-no budget films look big budget.

But is a moving camera, always the better camera? As a filmmaker are you providing motivation to your camera motion, or merely keen to use new kit and show off the bag of tricks you carry with you? As accessible as it is to all this amazing camera gear, it’s equally easy to over do camera motion by moving-it-for-the-sake-of-it.

Here’s an interesting video from Cinevate’s blog that got me thinking on the subject. Eduardo Angel discusses the importance and thought process behind the camera track; a camera move perhaps consider the most overused (purely on just how accessible it now is with the abundance of camera sliders).

It’s no secret that multi-axis stabilizers are starting to make a huge presence in filmmaking; it’s only a matter of time before these are equally as accessible to the camera slider. Will these become over used? Or will their incredible versatility unlock a new door for filmmakers, enabling them to put the camera exactly where and when they want, in more unique ways?

In reverse, it’s great to see a film put together that wouldn’t be possible/have the same effect without the use of camera technology, here are two good examples from Joe Simon and Philip Bloom:

I picked these two as they both heavily rely on camera technology to tell their story, but both in different ways.

Without a flying camera like the DJI Phantom, Philip Bloom’s Koh Yao Noi wouldn’t have been possible. He would never have achieved the desired aerial angles; the video would have looked completely different shot with a set of sticks. Joe Simon’s Gerry is slightly different, there’s less of a reliance on a sole bit of camera kit, but as a whole the piece utilizes many different pieces of gear which without, again wouldn’t have been the same film.

Filmmaking in normal practice works in reverse in the fact that story comes first, you should then select gear and camera in accordance to this. The key is, and I’ll revisit the question – Do you think about the motivation behind camera motion?

As well as the above two films, I’d like to include an example of a great short utilizing entirely static shots. I must admit, none immediately spring to mind (potential sign of just how integrated camera motion has now become with filmmaking) so please comment below with any examples you feel relevant here!