It’s been 1.5 years since Movidiam, the project management and networking platform for filmmakers was first introduced (see our post here). There have been many platforms attempting something similar but Movidiam seems to be one of the few that could be able to pull it off on a large scale, it was an ambitious project at the time and it still is now.

One and a half days down the road we have had Movidiam CEO George Olver as a guest of our ON THE COUCH talk show series where he updated us on the progress – and now, in early 2016, the platform has already been running for months and has garnered loads of users from the filmmaking community. They seem to be doing a great job at community building and are breathing life into the platform with a lot of high-end filmmakers and agencies using the platform already, growing steadily. 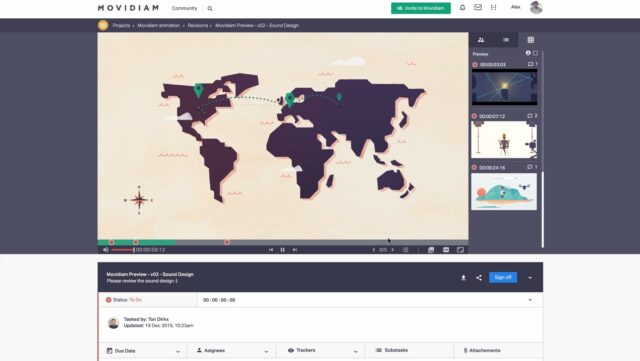 Time to check in with George on the status quo of the functionality of the platform. I met him in London at BVE last week and he gave me a run-through of the key functions of the platform, including profile pages, video revisions (a seriously cool feature that could revolutionize how we run video projects by clients), crew search and much more.

And in case you missed them, check out an ON THE COUCH episode with George below.