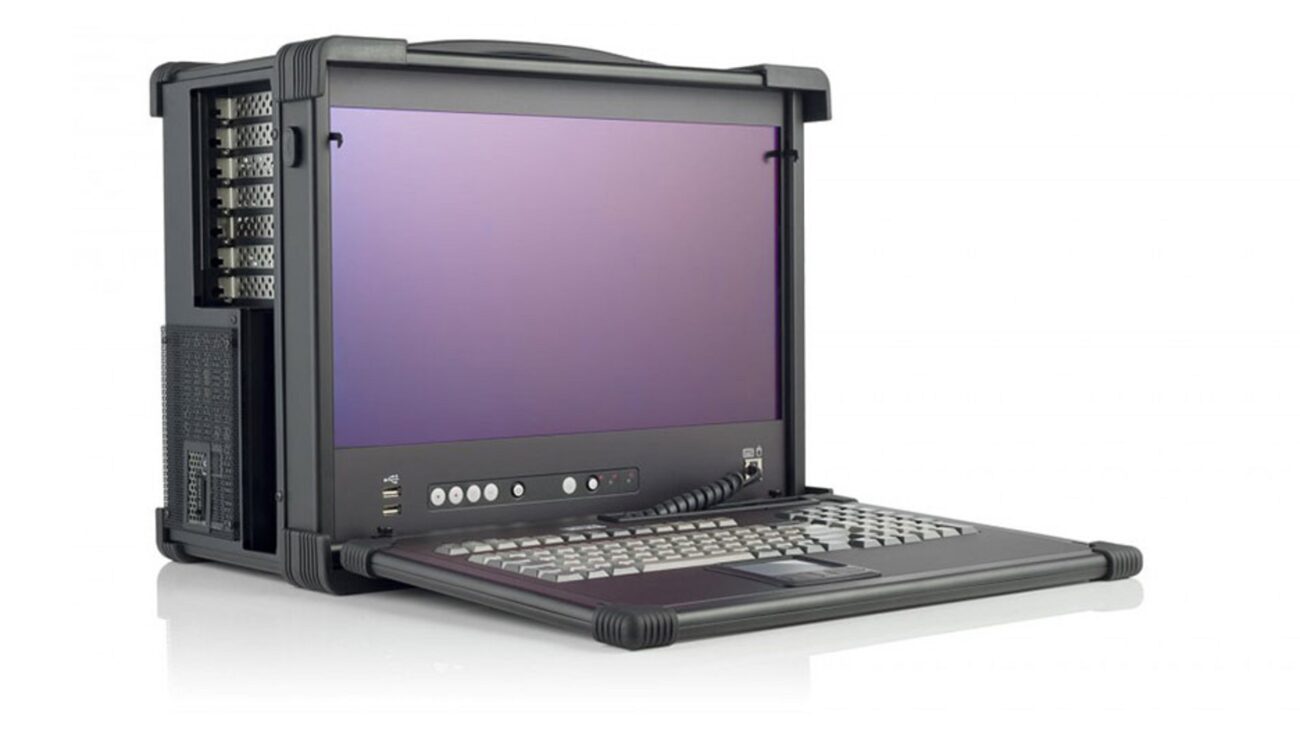 Mediaworkstation a-XP is a powerful computer with a screen and keyboard all fitted into a 30-45 lbs briefcase. It features AMD Threadripper CPU with up to 64 cores, a maximum of 256GB RAM, up to two discrete GPUs and space for two additional single-slot PCIe cards. The price starts at $7,997.

Mediaworkstations.net is a company based in Los Angeles that builds workstations optimized for specific uses. They have a wide variety of machines in portfolio, but one particularly caught our attention when we saw its photo.

The Mediaworkstation a-XP is a hybrid weird-looking device half-way between a desktop tower PC and a laptop. It is trying to combine (kind-of) portability with high performance. Let’s take a short look at it.

Mediaworkstation a-XP is basically a full-size computer case with a display and keyboard on the side so that it kind of looks like a huge laptop. It can’t, however, compete with traditional laptops as it is much larger (17.05″ x 13.68″ x 9.03″) and heavier. Depending on the exact configuration it can weigh anywhere between 30 and 45 lbs.

Speaking of configuration – this thing offers serious computing power. Its motherboard (according to Tom’s Hardware it is the ASRock TRX40 Creator) supports AMD socket sTRX4 with AMD TRX40 chipset. Thanks to this socket, the top CPU that can be used is the AMD Ryzen Threadripper 3990X with 64 cores (128 threads) at a frequency of 2.90GHz (Turbo 4.30GHz). Other (more affordable) CPU choices available are AMD Threadripper 3970X (32 cores) and 3960X (24 cores).

The motherboard has eight quad-channel DDR4 DIMM memory slots. Mediaworkstations offer 32GB, 64GB, 128GB, and a maximum of 256GB configuration. In terms of storage, there are two M.2 SSD slots which can both be equipped with very fast drives of up to 2TB each. Additionally, Mediaworkstations offer up to two SATA drives. Either SSD or enterprise-class HDD of up to 14TB each.

When it comes to GPU choice, it seems that only NVIDIA cards are available at the moment. Mediaworkstations offer up to two NVIDIA GeForce RTX 2080 Ti or up to two NVIDIA Quadro RTX 8000. Interestingly, they also offer NVIDIA Tesla cards for this workstation.

There is one 10Gb LAN connection and one 2.5Gb LAN connection as well as an 802.11ax dual-band wireless LAN module. Mediaworkstations even offer a 100Gb LAN controller as an option. Furthermore, there is a variety of optional peripherals, like wireless keyboards and mice or speakers, available.

Mediaworkstation a-XP can be purchased either with a Linux 64-bit or Windows 10 Pro 64-bit operating system. It is worth noting that the company also offers other similarly-looking models – the a-X2P and the a-X1P. They also have portable workstations with Intel CPUs in the portfolio.

The a-XP briefcase computer is available for purchase now. Its price is starting proud at $7,997 for the basic configuration (AMD Threadripper 3960X, 32GB of RAM, 250GB SSD drive, NVIDIA GeForce RTX 2060) without OS. If you start adding better components and additional drives, you get quite quickly over $10k.

What do you think about Mediaworkstation a-XP? Is it something to consider or would you rather get a full-size tower with a separate monitor? Let us know your thoughts in the comments section below.