The PolarPro FiftyFifty is the latest gadget for the GoPro HERO 5: a dome for split shots over and underwater. Read on for sample footage and my impressions.

Having used GoPro gear for the last few years, I am constantly amazed by the evolution of the cameras and their accessories. I recently got my hands on the PolarPro FiftyFifty, a dome shaped-accessory that allows you to achieve shots above and below the water surface simultaneously.

Now you may ask, why would I need a dome? Couldn’t I just hold the GoPro half way over and under water? There are two reasons why this isn’t a good idea. First, the GoPro’s tiny lens makes it difficult to accurately hit that half/half position. Secondly, there’s the small detail of physics blurring your image: the surface tension of the water, in addition to the air and plastic front lens creates a contact angle with a water surface curvature, acting like an optical element. If this happens directly on your front lens, it blurs a lot of your recorded image. However, if this phenomenon happens further away – hence the dome – then it occupies only a small portion of the image, and you get a clear split shot. 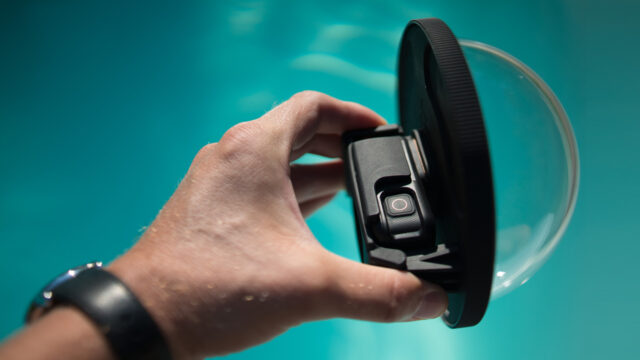 PolarPro recently introduced their dome for the GoPro HERO 5, the FiftyFifty. It comes in a nice package, and includes a grip as well as a neoprene cover to protect the dome surface. Mounting the GoPro is a matter of a few seconds, and you are ready to go.

Shooting with the FiftyFifty

All in all, getting those interesting angles and split shots with a dome is not too difficult. It really adds another dimension to your compositions – a very valuable tool! Nevertheless, here are a few things to consider shooting with the PolarPro FiftyFifty.

I made the video below while visiting the Kornati Nationalpark in Croatia with my family. Below you can find some of the issues I encountered while shooting this film.

Things to consider while using a dome:

Now, I have talked a lot about shooting with a GoPro and dome underwater. Is there anything specific to say about the PolarPro FiftyFifty itself? No. It just works. And that is a very good thing to say about any product. For more information, visit the official product page.

Do you shoot the kind of work that would benefit from using the PolarPro FiftyFifty? Let us know in the comments below!