At IBC 2017 we caught up with Mark Voss, who showcased the new F&V 1×1 and 3×1 LED panels, both of which offer strong output and soft light.

In the saturated market of LED panels, it takes something special to stand out from the crowd. The latest offerings from F&V aim to satisfy customer demand for powerful yet soft LED panels.

The new F&V 1×1 LED panel offers a powerful output of light at a 70° angle when bare-faced. The light manages to pack quite a punch at a 1m distance, making it still usable outdoors – something that F&V achieved by designing the LED array with lenses surrounding each of the bulbs.

When you add the diffuser, the F&V 1×1 beam angle increases to 90°, offering a bit more spread and a softer light quality while retaining a lot of the brightness.

The manufacturer also managed to integrate very fine brightness adjustment into the new F&V 1×1. In addition, it is capable from starting from a very dim initial setting – something usually not found in regular LED panels which they tend to start from a 10 or 15% power even at their lowest settings. This is particularly helpful when dealing with the more sensitive cameras available these days.

F&V will be releasing this new 1×1 panel in the coming months, with a retail price of €549 for the daylight-only version, and €599 for the bi-colour version. They will be available individually and as 3-light kits. 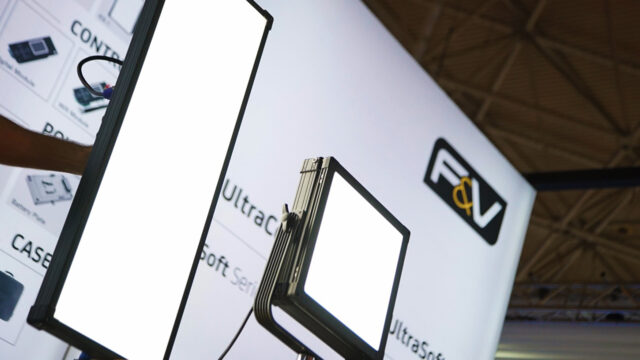 F&V also showcased its new 3×1 panel, which joins the Soft series as a versatile and powerful striplight solution. It offers around 270W of LED power resulting in a very strong, yet soft light. F&V has decided to do away with the yoke mount, opting instead for a ball mount to allow positioning it in a variety of angles.

The pricing for the 3×1 is expected to be around the €2K range, and it should become available in the next two to three months.

Could the new small F&V 1×1 find its way to your lighting kit? Let us know in the comments below!