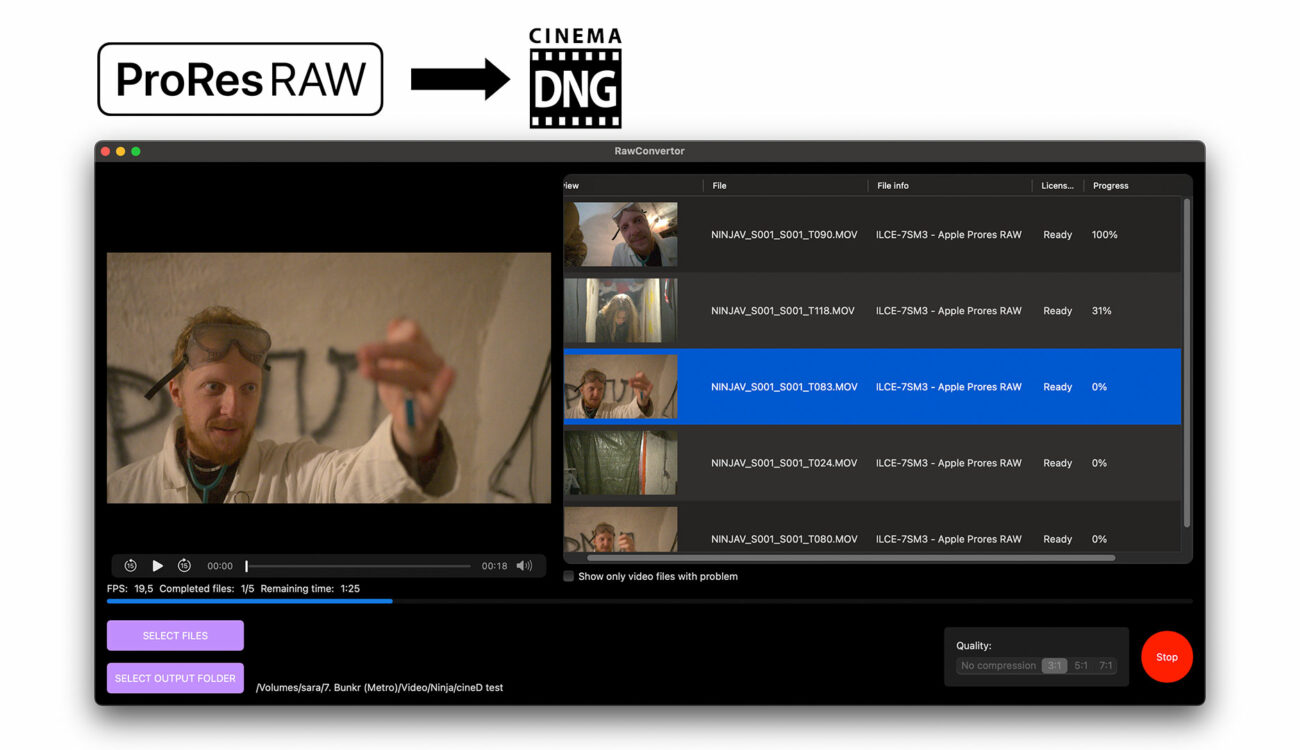 Raw Convertor is a new macOS 12 app that can convert a batch of ProRes RAW (or PRR HQ) files (including audio) into CinemaDNG (uncompressed, 3:1, 5:1, or 7:1) so that users can open these in DaVinci Resolve and still be able to adjust raw metadata such as white balance or exposure. Currently, the app supports PRR files from Sony a7S III, A1, and FX3, as well as Nikon Z 6 and Z 7. More cameras are being added continuously.

Almost four years ago I fully switched to DaVinci Resolve for all my postproduction work. For my postpro needs, I am truly satisfied with the NLE except for one thing – no native ProRes RAW (PRR) support. The compressed raw format from Apple has been getting more attention in recent years as more and more cameras start supporting it. Most of them still only record ProRes RAW via external recorders from Atomos, but we are seeing the first early birds – such as Nikon Z9 or the DJI Ronin 4D (check our review here) – that offer internal PRR recording. With every article announcing ProRes RAW support for yet another camera, I can’t leave out a little rant about the lack of native ProRes RAW support in Resolve. Now, while I like working with BRAW, I would really really really appreciate having the option to open PRR natively in Resolve.

No way but convert

Since the chances of adding native PRR support for DaVinci Resolve currently don’t look so good, the only chance of opening those clips in DR is to convert them beforehand. Most filmmakers have been converting these files into simple ProRes – either 422 or 4444 and then opening them in Resolve. The problem is, by doing so you lose some information and flexibility for postproduction. For example, it is not possible to adjust the white balance, tint, and other metadata with simple ProRes files.

Luckily, there is now another option available. A new macOS app simply called Raw Converter can convert a batch of ProRes RAW files into CinemaDNG and therefore keep all the raw metadata adjustable.

CinemaDNG (cDNG) is a bit older raw video format from Adobe, but it is still very popular for its simplicity and flexibility. For instance, the SIGMA fp and fp L still offer CinemaDNG recording internally. Before the introduction of BRAW, Blackmagic cameras were able to record in cDNG as well.

Nikolaj Pognerebko, Czech filmmaker and programmer based in Prague created an app that can perform a batch conversion of ProRes RAW (or PRR HQ) files (including the audio tracks) into CinemaDNG and make them therefore available for opening in DaVinci Resolve.

The advantage of CinemaDNG, as opposed to ProRes 422 or 4444, is that metadata is not baked-in. After opening the converted cDNG files in Resolve, users can still access the Camera RAW panel in Resolve and adjust all values such as WB, Tint, Exposure, and others (except ISO, but that is virtually the same as exposure). Another difference is that cDNG has a 16-bit linear color space, no Log (like standard 10-bit ProRes).

In the Raw Convertor app, cDNG is available in four flavors – Uncompressed, 3:1, 5:1, and 7:1. Generally, ProRes RAW has a compression rate of approximately 8:1 (PRR HQ around 4:1). That means the 3:1 cDNG should not lose any image quality compared to PRR HQ. The more compressed flavors theoretically lose some information, but as Nikolaj states, he did not see any compression artifacts in his testing when grading 7:1 cDNG footage.

Now, CinemaDNG is known to produce huge file sizes, but it all depends on compression. Nikolaj provided an example of file sizes comparison:

The app currently supports PRR footage from the following camera models (via Ninja V of course):

Other cameras are being added continuously with frequent app updates. Every camera, however, requires an individual calibration, so it takes some time.

Currently, the Raw Convertor app is only available for macOS 12 (Monterey) and it can be downloaded from the Apple App Store. The app can convert 60 frames of footage (including audio) free of charge to test the capability. For full-length conversion, an in-app purchase is available in the app. The license currently costs $75 per camera. As Nikolaj told me, he currently does not plan to make a Windows or Linux version.

What is your workflow for opening ProRes RAW files in DaVinci Resolve? What do you think of the idea to convert PRR to cDNG? Which cameras would you like to have added next? Let us know in the comments section underneath the article.