Sachtler and Vinten have brought their popular Flowtech technology to the new Flowtech 100 tripod, catering for tripod heads with 100mm and cameras of up to 30kg. 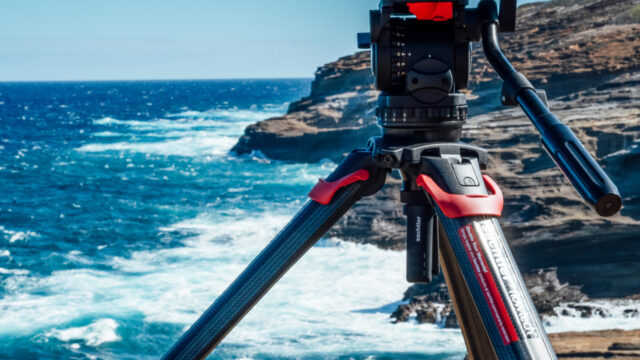 Almost immediately after Sachtler announced the Flowtech 75, the question on many people’s minds (including my own) was if a slightly larger 100mm bowl version was on the drawing board. It’s not that there is, or was anything wrong with a 75mm system, in fact, quite the opposite. The Flowtech 75 and the technology within has revolutionised camera support. There was just an immediate acknowledgement of a need for this ground breaking new technology with a heavier payload for larger cameras.

In all honesty I also don’t think there was any doubt that a larger Flowtech system would come. Meanwhile the Flowtech 75 has been a huge success. Sachtler have done something many never imagined could be done, it feels like they actually managed to reinvent the tripod. You can read our review of the Flowtech 75 here. 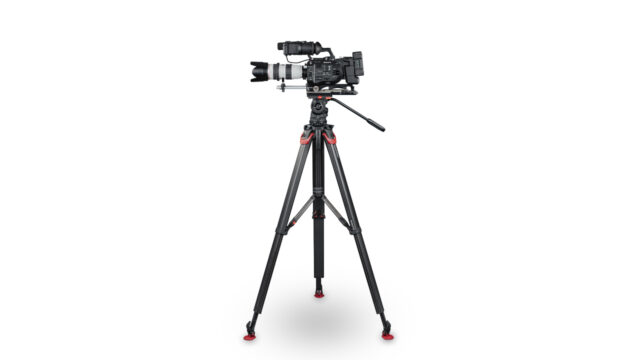 Most of what’s true for the Flowtech 75 also applies to the Flowtech 100. The idea is that this tripod system can be adjusted in the moment, with minimum fuss. The Flowtech 100 can indeed be set up in a short amount of time, and has been designed to serve the needs of field news reporters and documentarians using typical ENG or EFP cameras. We’ll put it through its paces and compare it to their older speed lock version in an upcoming review in a couple of weeks.

The carbon fibre legs are very stiff due to their cross section and the manufacturing techniques used. The quick-release brake mechanism makes it fast to deploy, which is the feature I like most about the Flowtech 75. The Flowtech 100 should provide a rock solid platform both fully extended (155cm height), and in its lowest position (26cm).

The Flowtech 100 is built on exactly the same technology as the Flowtech 75 but with larger, stronger castings from the top of the legs up as well as cast components for the quick-release brakes. All of the Flowtech 100 components have been designed for secure support of higher payloads and bigger heads.

According to Sachtler/Vinten, the Flowtech 100 has undergone some endurance and environmental testing to ensure that the hinge lock mechanism performs beyond the rated capacity of the tripod. That’s understandable because one of the biggest challenges is to support 30kg of weight at the lowest position while not destroying the hinge locks. The Flowtech 100 is one of the most rigid in the Sachtler/Vinten range in terms of torsional stiffness. They claim that the tripod resists twisting movement during panning even at full capacity. That’s something you see from existing tripod models when they get close to capacity, and it’s nice that this seems to have been a focus point.

The Flowtech 100 has been engineered with popular mid weight cameras in mind such as the ARRI ALEXA Mini, Blackmagic URSA Mini Pro, RED WEAPON, Sony FS7, as well as popular ENG cameras. It is fully compatible with any 100mm fluid head, especially those from the Sachtler or Vinten product families.

If you’ll be at upcoming IBC in Amsterdam (like a team from cinema5D) you can see the Flowtech 100 at the Vitec stand 12.E65. 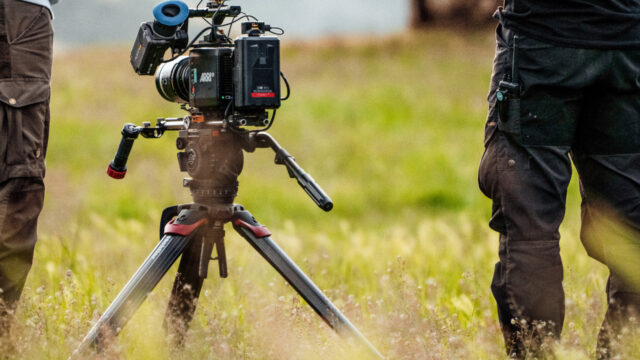 Are you already using a Flowtech 75? Have you been holding out for the Flowtech 100? Let us know your thoughts in the comments.