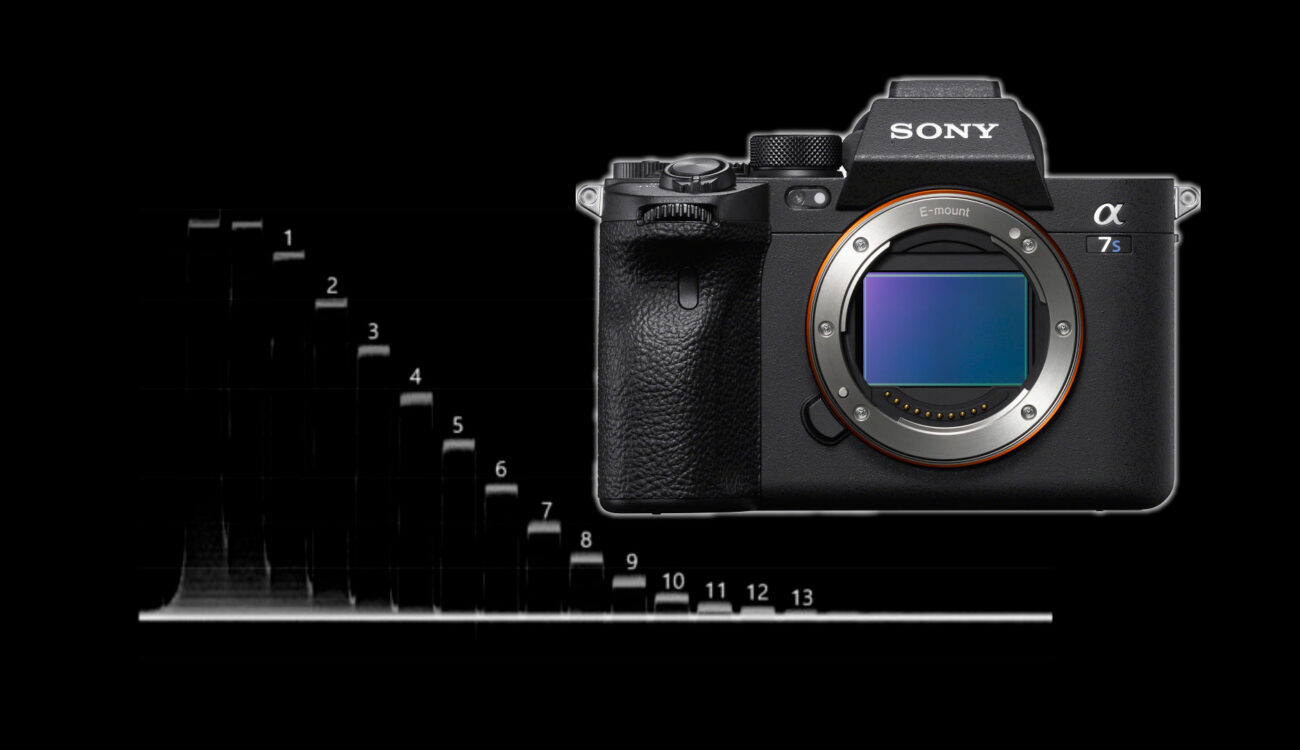 A production version of the long anticipated new Sony a7S III has finally arrived at the CineD headquarter for our lab test. How does it fare in comparison to its peers? Read on …

EDIT: According to requests we got, the second native ISO 12,800 value was tested now and results included in this article.

Before we start, a little personal note from myself – when the predecessor, the Sony a7S II hit the shelves in Vienna on October 2015, I was rushing to the stores and bought it immediately as this was the camera to buy for full frame videography. I was very happy with it for more than 3 years, and end of 2018 I sold it as I was thinking a successor should come soon … well, it took quite a bit longer than that as we all know.

Now in case you missed our real-world review (of a pre-production Sony a7S III), watch and read it here.

Now we have October 2020 and the Sony a7S III is in my hands – and I am asking myself if I should rush to the stores again? After all, the camera landscape has changed and a lot of competing 10-bit full frame models from other manufacturers are readily available (Canon, Panasonic, Nikon, and the offerings from ZCAM just to name a few). Plus, in the meantime I bought a BMPCC6K – and I am super happy with it …

Nevertheless, running the Sony a7S III through the lab was a task that I was looking forward to very much.

All the tests below were performed in SLOG3, SGamut3.Cine with the internal XAVC S-I all intra 4:2:2 10bit codec.

As usual we are using our 300Hz strobe light for this as explained previously. And voilá: the Sony a7S III trumps (sorry for using that word) – rewind – the Sony a7S III has the best full frame rolling shutter readout value ever measured: a whopping 8.7 ms for UHD (3840×2160) in 25 frames per second.

This value is really a huge step forward, so far the best value was from the Canon R5 in full frame readout having 15.5 ms (in 4K DCI 17:9 mode which has 7% less picture height). For comparison, the recently measured Panasonic S5 clocks in at 21ms in UHD.

Now, quite interestingly with 8.7ms a maximum of ~115 frames per second would be possible. Looking at 100fps in UHD mode, the same 8.7ms are measured, hence up to 100fps nothing changes in the readout – very fascinating.

After this superb start, lets have a look at the dynamic range.

Shooting the DSC Labs Xyla 21 stepchart (see a writeup of our test procedures here) the following waveform plot is obtained:

Around 13 stops can be identified above the noise floor. However, what becomes obvious is a very clean noise floor – it looks like a lot of in-camera noise reduction is happening which cannot be turned off. This was to be expected from the low-light king which has always been Sony’s a7S line.

IMATEST calculates the signal to noise threshold value of 2 at 12.4 stops – a very good result but this has to be put into perspective.

Looking at the middle chart of the three IMATEST graphs above the in – camera noise reduction becomes obvious – above the light blue line (signal to noise (SNR) threshold of 1) no further stops are visible towards the dark (left) end. This is always a sign of noise treatment in one way or another, and the risk is that the image doesn’t look organic any more.

Comparing this to recently tested cameras like the Panasonic S5 (please have a look again here) you can see that the S5 has additional stops visible in the noise floor and still shows 12.1 stops at the SNR = 2.

Hence, a solid result at SNR = 2 for the Sony a7S III but don’t expect much more information to be retrieved from the overly clean noise floor.

EDIT: the following statement was in the original post – Sony has updated the second native ISO value for the production version to 12800 in the meanwhile: “As my colleague Johnnie noticed in his review of the preproduction Sony a7S III, there seems to be a second native ISO at 16000 where the image is very clean.”

Here is now the result for the production version second native ISO value, ISO12800, the waveform plot and the dynamic range result from IMATEST. The waveform shows 12 stops above the noise floor, IMATEST reads 12.1 stops at a signal to noise ratio of 2.

Hence I decided to look at the dynamic range at ISO 16000 as well. Again, looking at the waveform below 12 stops plus a faint 13th stop are visible. Quite amazing, considering the high ISO value.

As Johnnie called it in his review, the Sony a7S III is a “night vision” device.

As part of every lab test we perform the latitude test. Latitude is the capability of a camera to retain image detail and colors when over- or underexposed. Very revealing, as not only the sensor capabilities are displayed but also the internal codec capabilities – how well is shadow information retained.

For our base exposure scene we adjust the strength of the fixed studio light such that at an f-stop of 4 my colleague Johnnie’s face is exposed at a maximum of 60% Luma value in the waveform display for 25 fps, 360° shutter angle for ISO 640 (of course, Johnnie’s position and relative distance to the grey background is kept the same for all cameras).

In DaVinci Resolve Studio (using the latest version 16.2.7) we push the image back to the zero base exposure by the adjusting lift, gamma and gain sliders and comparing the waveforms.

Jumping ahead to the 3 stops underexposed and pushed back scene, we get the following image:

At four stops of underexposure, brought back to zero the limit of usability is reached. While the colors and image detail are still largely there, ugly blocky chroma noise artefacts are appearing (look at the shadow area at the lower right side) which I find impossible to remove via noise reduction.

Here is a try in DaVinci using 3 frames temporal, threshold 5 and spatial threshold 1 – for me the limit before the image detail is lost and everything becomes plasticky:

Just for reference here is the 5 stops underexposed image, which is completely unusable, with or without noise reduction:

Unfortunately, a similar situation like we encountered with the Sony FX9 in the lab test is happening: it seems that the internal codec XAVC S-I (4:2:2 10bit) with an average bit rate of 250Mbit/s for 25 frames per second is not capable to retain shadow detail without showing nasty chroma noise artefacts. Those large patches of blocky chroma noise cannot be removed effectively by noise reduction.

The new Sony a7S III shows a mixed bag in the lab test. It shows by far the best rolling shutter result that we ever tested for a full frame camera – 8.7ms. Amazing.

In the dynamic range test at ISO 640 it has a solid 12.4 stops at SNR = 2, but not much more is there – maybe half a stop. It looks like Sony has a lot of internal noise reduction processing going on to squeeze out this result. Which for most users is fine – a great out of the box result! At ISO 16000 the results are really impressive: 11.9 stops (SNR = 2) are measured.

A Panasonic S5 for example shows 12.1 stops (SNR = 2) but a 13th and 14th stop are still there – similar to the Canon R5 in RAW filming mode. And the Sony FX9 has a 13th, 14th and even a hint of a 15th stop buried in the noise floor, although it shows only 11.5 stops at SNR = 2 – thats the reason why we always give you the full result that you can put things into perspective.

In the underexposure test, the Sony a7S III is hindered by strange, large patches of chroma noise artefacts – if you don’t want to have those the limit is reached at 3 stops of undereposure – rather similar to the Sony FX9 if you use the internal All-I codec.

For comparison the recently tested Panasonic S5 actually looks surprisingly good until 4 stops of underexposure, you could get away even with the 5 stops underexposed image. Mainly because the noise is very finely dispersed such that you can very effectively apply noise reduction in post production (and yes, please turn off the lens compensation for V-Log as our reader Cliff Totten has pointed out).

In any case, I want to remind everyone that the lab test is just one piece of the puzzle when comparing / making a judgement on cameras – overall the Sony a7S III packs a huge list of superb features in a very compact body.

Times are good for us filmmakers.

Have you had some experience already with the new Sony a7S III? Please let us know in the comments.