The RX0 was announced at the beginning of September 2017, and there is a good chance that by the time you read this Sony RX0 Review, it will already be shipping. If you haven’t had the chance to hear about this miniature camera, let me start by quickly introducing this little creation. Now, imagine having a production camera the size of a matchbox. A camera that has a large 1.0-type Exmor CMOS sensor, can shoot full HD video internally and output 4K video externally. That is exactly what Sony did with the new RX0. They literarily shrunk the already small RX-type camera and packed it all into a 59 x 40.5 x 29.8 mm duralumin body weighing just 100g. Sony made it water, shock and crushproof and, on top of it, made it capable of shooting stills in high-quality JPEG & RAW formats. However, as this is a video review, I won’t touch on its photo functionality at all.

So now in theory we’ve got a winner! Interested to find out more? Keep reading.

When I first had the chance to see the camera, I fell in love with the concept. In my mind, this kind of camera would be a perfect B or C cam in some of my productions or, alternatively, an A camera where size does matter and restrictions could keep me from using anything larger that might attract attention.

Our excitement became even bigger after having the chance to talk to Sony during IBC. We were so impressed by what we saw, that we decided to award the camera with one of our show innovation prizes.

With such a long introduction, you can imagine that I was eagerly waiting to get my hands on the camera and finally review it in the way I would use it, meaning not as an action cam (as it certainly is not!), but as a valid piece of equipment in the environment of a normal documentary production. For the sake of argument, I decided to shoot a whole piece with it in order to learn its strengths and weaknesses.

But before continuing, there is one topic that needs to be clarified once and for all: is this a GoPro Hero6 Black clone?

I was recently invited by GoPro Europe to the launch event of the GoPro Hero6 Black. While the technology demonstrated at this event was truly impressive, I couldn’t stop thinking that we were actually seeing more of the same, just with better quality. For some, this is wonderful news, while for others, this means that GoPro has decided to stick to what they know best: manufacturing action cameras.

Now, here comes Sony and introduces something that looks similar in size, causing the crowd to shout out that the RX0 lost the battle even before starting the fight as it doesn’t shoot 4K video internally. After testing both, I can clearly say that these two cameras are completely different devices and one should not compare them.

In brief and in no particular order, here are the main differences between the cameras:

Conclusion: Choosing one camera over the other depends heavily on the type of production you are filming. I would clearly classify the GoPro Hero6 Black as an “action cam” while giving the Sony RX0 the title of “production camera”. 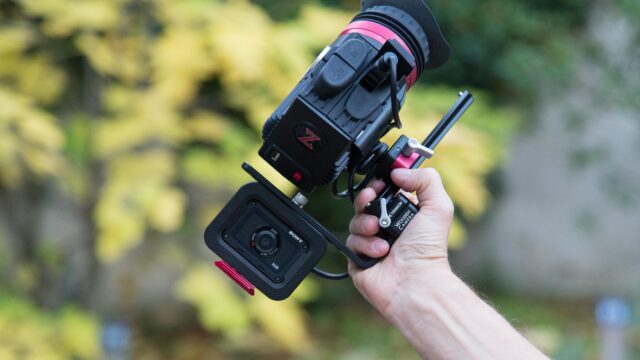 Now that we are done with this short comparison, let’s concentrate on the subject that brought us all together, the  Sony RX0!

I had the chance to test the camera over the past few days, although unfortunately I couldn’t dive as deep as I wanted to cover all of its functionality, concentrating instead on what was the most important for me: picture quality and usability in a documentary-style shooting environment. Please note that this review reflects my personal opinion and I’ve done everything I can to supply our loyal followers with accurate information.

There is a way to avoid most of what I’m about to write from this point on by simply switching the camera to “Intelligent Auto Mode”. If you are the kind of cameraman that likes to keep things simple, then this should be your preferred shooting option. Bear in mind that the camera will calculate everything for you except for focusing. You still need to take care of this regardless of your choice of shooting mode as the camera cannot Auto Focus while shooting video. If you are like me, and you like a challenge when shooting, set the camera to the “All Manual” setting and prepare yourself for a different kind of shooting experience…

If you are familiar with the Sony menu structure, you will feel right at home… with one exception. Everything is very small and needs to be done slowly and with caution. The screen is small and the buttons are tiny. If you need to to react fast, then this is the wrong tool for you.

After getting used to the slow working pace, I had to consider three main points: Regardless of whether you choose to shoot in S-LOG 2 (ISO 1600) or not, if you keep your shutter speed set to 1/50 or 1/60, I’m almost 100% certain that you will need to use an ND filter in front of your lens in most outdoor shooting situations. Sony cleverly designed the camera so that the front element can be exchanged, letting you choose between waterproof functionality with a plastic cover that protects the front camera body and lens, or a front cover that lets you attach small filters almost directly on the lens.

The main issue is that even after adding an ND filter, it will be very hard to control the amount of light entering it during changing lighting conditions as the f-stop is fixed. When it comes to shooting indoors, f/4 even on a relatively large 1” sensor can be considered limiting at times.

As Autofocus is not available when shooting video, getting your focus right can become an issue with this camera. The menu offers two options:

Whatever you choose, if you are a creative shooter, you will find yourself fiddling A LOT with these focus parameters. 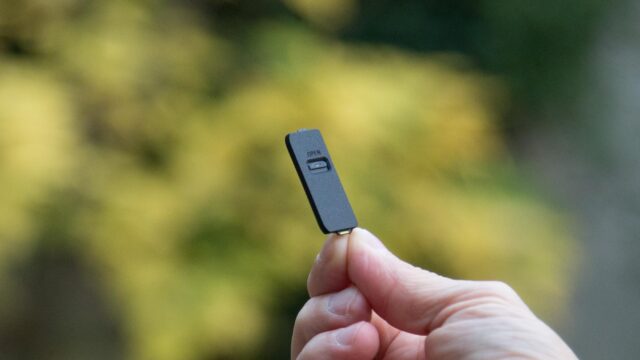 How to avoid losing parts of the camera body:

On the rear left hand side of the camera, you will find a little protective cover for the micro HDMI/USB/Mic inputs and micro SD card slot. This part comes off completely when you want to access the ports, and is therefore very easy to lose. Unfortunately, this means the camera loses its dust and waterproof functionality, so I predict Sony will be getting many requests this spare part in the near future… 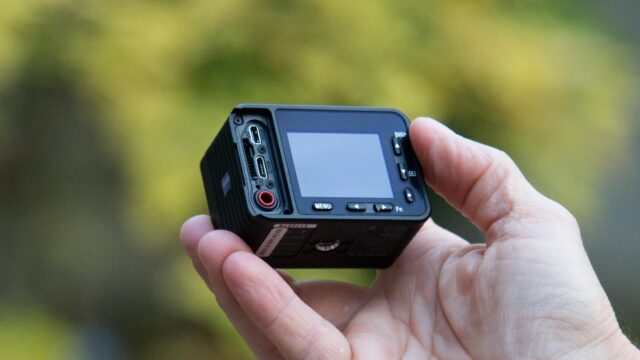 Other important points to consider:

OK, so I’m up and running, being challenged by some of the topics I’ve mentioned above when, around 25-30 minutes into my shooting, the camera shuts itself off. As you can imagine, the processing required to handle all those video signals in such a small body is very power hungry. In fact, I can assume that this was one of the reasons for Sony to limit the recording internal resolution to full HD. In general, it looks as if Sony has done everything it could to help preserve every last drop of juice from the small supplied battery, at times at the expense of usability. For example, the LCD screen will dim automatically after 30 to 60 seconds of shooting, and I could not find a way to disable this annoying function. On the positive side, the camera can be powered by a common external mobile battery, which can act as a good back-up solution in case you find yourself stuck.

Surprisingly, despite doing everything it can to preserve battery, the camera has an On/Off button that is much too sensitive to the touch. True, it is great that the camera powers on very quickly, but it can just as easily power on when bumping against another piece of kit in your bag, resulting in an unexpected flat battery.

Sony RX0 Moiré – Click on the photo for better viewing

Every camera has its strengths and weaknesses, but one thing you don’t want is ugly artefacts in you picture. Now, before continuing, I have to remind myself that, despite offering a number of professional features, the RX0 is NOT a professional production camera per se. I can only guess that Sony sees this camera as a complementary shooting device in the arsenal of proud a7SII, FS5 and FS7 owners. After all, the larger RX100V (and the IV before that) did a good job in preserving adequate picture quality.

The thing is, the RX0 is not in the same league. The full HD coming out of this camera leaves a lot to be desired, probably down to poor down-scaling from its 4K sensor. Moire and aliasing are very noticeable and can show up unexpectedly to ruin some of your shots. The noise levels are exaggerated, and it doesn’t matter how well you light a scene, there will always be some parts which are underexposed. Unfortunately, the noise pattern is very distracting and ugly, so my advice is to try to and keep your ISO as low as possible to minimise the problem and hope for the best. What’s more, when shooting for longer periods of time, the camera will heat up and as a consequence you might get a higher level of noise in the picture. 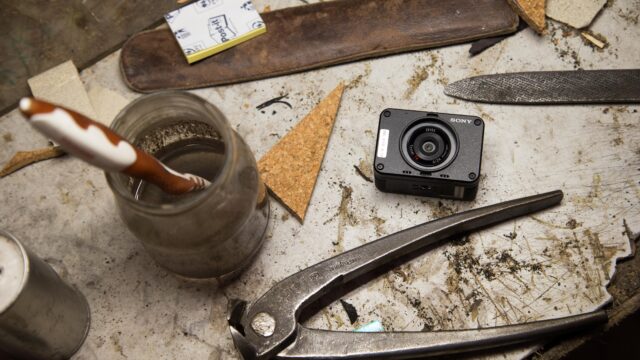 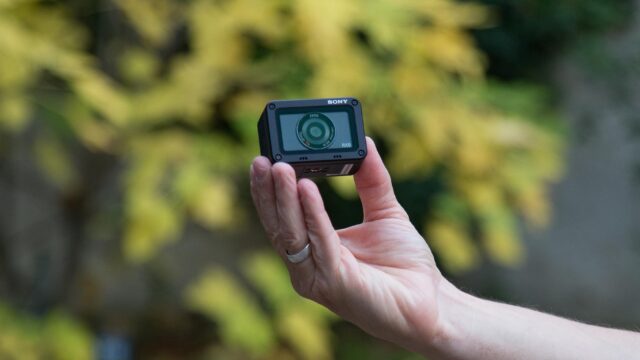 The Sony RX0 is a great concept and a true technical achievement. I’m sure that it can shine in other types of filming scenarios, but for me as a documentary film shooter it leaves a lot to be desired. Sony would be wise to implement autofocus during video recording in the future (probably at the expense of an even shorter battery life) and to try to reduce or control the noise patten currently found in the picture.

Information about the video above: Shot in 1080/25p, S-LOG 2, ISO 1600 (default) up to 2500. Edited on Adobe Premiere CC and color corrected with filmconvert. As requested by many, ungraded version of the above video can be downloaded from here 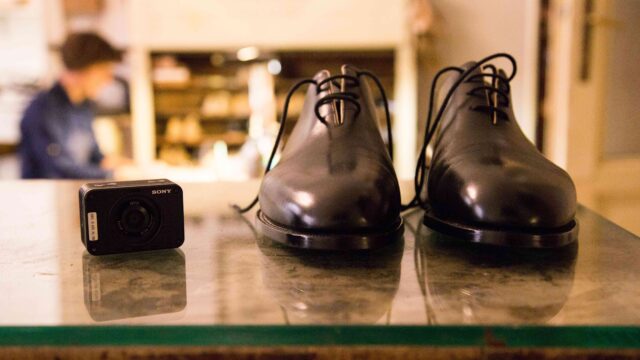 Special thanks to Markus, Daniela, Daniel and the rest of the amazing team at the SCHEER shoes company.