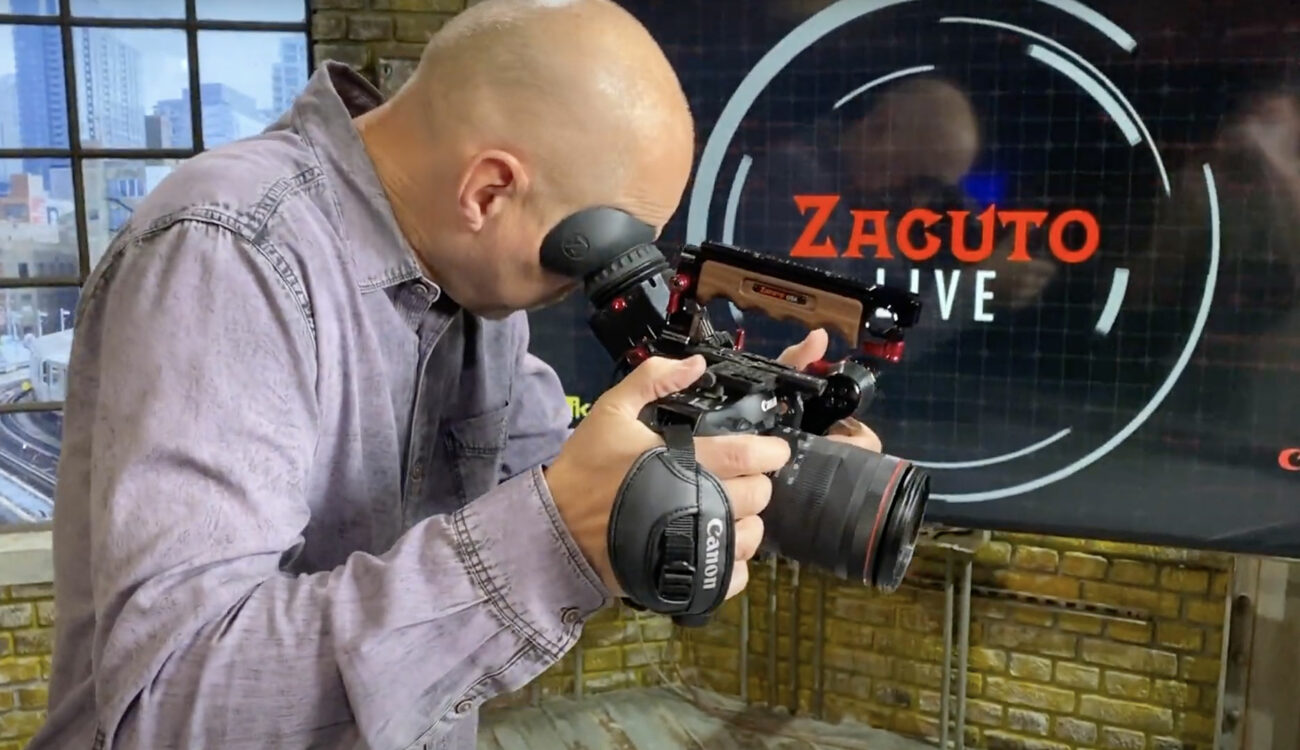 Zacuto recently presented a sneak peek preview of a Zacuto Canon EOS C70 cage with a Z-Finder system. These products are still in the prototype stage, but they should be available soon and are already available for pre-order. Let’s take a closer look at these!

The Canon EOS C70 is already shipping, and if you missed it, you could watch our interview with Canon here. In a nutshell, this camera features the same sensor as the Canon C300 Mark III with built-in DGO technology to increase dynamic range up to 16 stops. The C70 is the first Canon cinema camera to feature an RF lens mount, and it can record footage internally in DCI 4K/4K UHD at up to 60p in XF-AVC H.264 Long GOP 4:2:2-10bit at a bitrate of 260Mbps (DCI 4K), and up to 410 Mbps in 4K/DCI in up to 30p. You can also record slow-motion footage in 4K at up to 120 frames per second in 4:2:2 10-bit.

This very compact camera is a beast on its own with a very compact form factor. However, it has some drawbacks, like no SDI output and no viewfinder. To solve that problem, Zacuto is the first company to release a cage system and Z-Finder for the Canon EOS C70.

In the prototype stage, Zacuto showed a 3D-printed prototype of a cage for the Canon EOS C70. This lightweight and compact cage wrap partially around the camera to expand your rigging options.

On the left side of the camera, there’s a side rail that is NATO compatible, with some 1/4-20″ mounting points, another 3/8-16″ ARRI-style threaded hole, and an M6 ARRI rosette mount.

Finally, the baseplate attaches to the bottom of the camera via three screws for a very solid build. The baseplate has a built-in Arca-Swiss plate. But, there’s also three 1/4-20″ and one 3/8-16″ mounting points if you want to attach your own quick release plate to it.

In addition to the cage, Zacuto also showed a 2.5x Z-Finder and mount compatible with the Canon C70 built-in LCD. Indeed, the camera doesn’t have a viewfinder so that this solution might be a nice addition in bright daylight shooting conditions.

Obviously, you can’t close the LCD screen once the Z-Finder is mounted onto the C70, but you can still tilt it a bit front and backward. Because Zacuto’s metal frame of the Z-Finder and the glass they use is usually on the heavier side, this might put some strain on the hinge of the LCD screen.

The Zacuto Canon EOS C70 cage and Z-Finder are available for pre-order and should start shipping mid-December. The cage retails for $295.00, C70 Z-Finder Mount is $300.00, and the Z-Finder itself is $550.00. For more information, please visit Zacuto’s website here.

While the cage is well-priced, the Z-Finder and Z-Finder mount price are a bit too high for my taste. Indeed, for $845.00, I might prefer investing in a dedicated EVF that’s probably more versatile in the long-term.

I’m a bit surprised that we did not see any other Cage and rigging solutions from other manufacturers (yet). Apart from the lacking viewfinder, the camera does very well on its own out of the box and doesn’t require tons of extra accessories to be ready to shoot – like the RED Komodo, for example – but some cages options would be much welcomed.

What do you think about this Zacuto Canon EOS C70 cage and Z-Finder solutions? Did you receive your C70 yet? Don’t hesitate to let us know in the comments below!