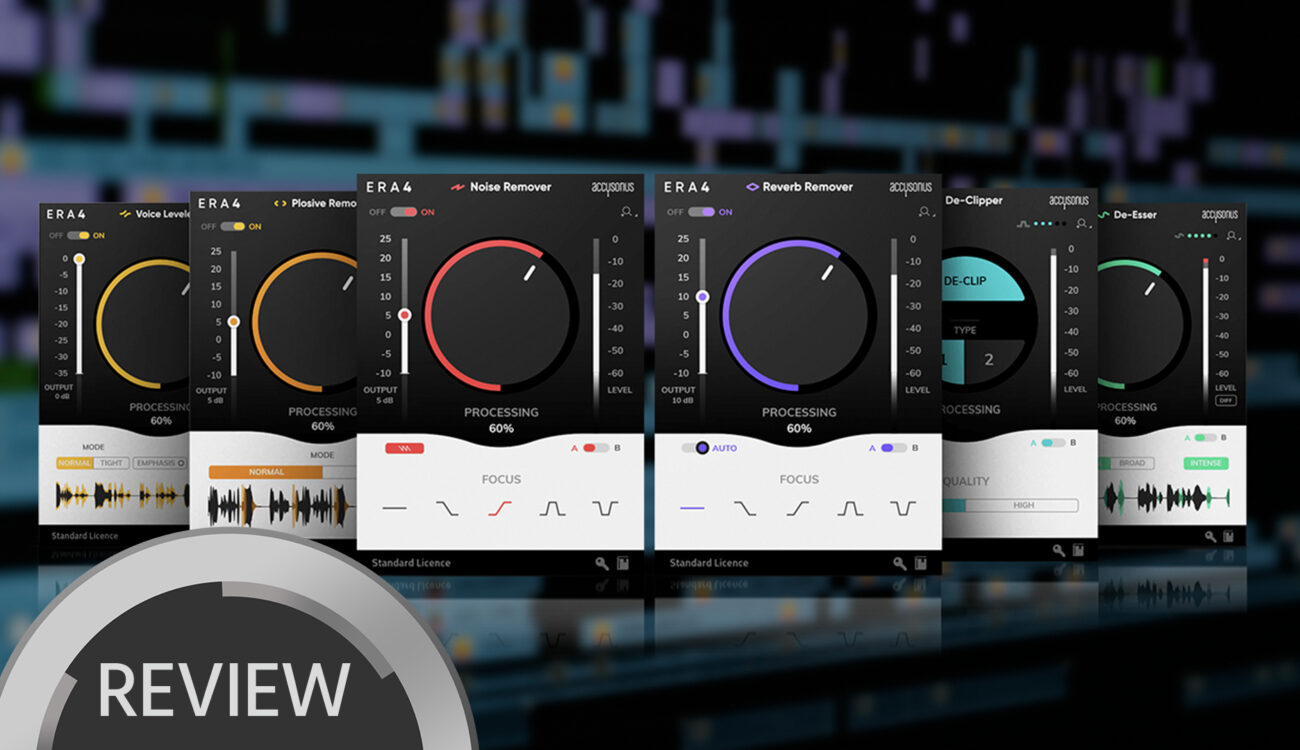 Accusonus has just launched version 4 of their one-knob plugins for filmmakers – ERA. But, do these simple-to-use plugins, which are compatible with nearly every NLE and DAW on the market, hold their promise? Let’s take a look with this comprehensive review by a non-audio person.

The team at Accusonus is moving fast and continuously improving their products. We first talked about the ERA series of plugins a couple of months ago. In the meantime, they already had version 3.0 out, in which they also introduced a new De-Clipper plugin.

This update was free for all existing customers. Today, they are back again – with version 4.0 – and we’ve decided to give you an in-depth review of how these tools can improve the audio quality of your next project.

Let’s first start this article by saying that I am not a professional sound mixer or sound engineer. In fact, I don’t retain any job with the word “sound” in it. I’m just a filmmaker, doing mainly corporate/advertising films and a couple of music videos.

Indeed, like many filmmakers, I – most of the time – have to deal with sound recording and sound post-production myself. You don’t have any other choice for smaller projects when working as a one-man-band. Nowadays, it is easy to have access to some pretty decent audio recording gear that will get you great sound with just some knowledge about how to record proper sound. Doing a necessary EQ/Compress/Automation treatment is a whole different world for most of us.

The reality of the field is that you often don’t have enough time (or there is not enough budget) to polish the sound mix or vocals treatment. Turnovers are so quick, and the final product has to go live as quickly as possible. Usually, the sound coming straight out of the recorder is just good enough for most clients. We all know that – and don’t blame yourself for not treating your audio – be happy about delivering on time.

There is a situation that every freelance filmmaker has faced once or twice. You go on location for an interview and see the beautiful, typical corporate room/office. It consists of a desk, a chair, white walls with some posters if you have some luck – and the fantastic reverb of that empty space. We all know that, and you can’t control where each and every interview will take place. There is nothing you can do about reverb on set if you have to move quickly (except putting sound blankets all over the place, but that’s not quick). You’ll have to fix it in post, or at least do as much as you can about this.

Audio treatment in post-production is time-consuming and complicated. You can’t mess with every button of plugins and hope that it will sound great. It will not. So, you have a couple of solutions: hire a professional sound recordist (and it’s worth it if you have the budget for it), learn how to do it yourself, and buy some plugins to help you with that, specifically.

For that last one, the team at Accusonus has developed the ERA collection of plugins. This series of plugins is designed with filmmakers in mind, to make their lives easier, with a simple turn of a button.

For this test, I chose to use Adobe Premiere Pro, and the installation process is simple. All you have to do is download the installer (which you can do here), you double-click on it and install the plugins. Then, all the plugins are automatically added to your VST library. Finally, launch Premiere Pro and scan your audio library, choose if you want the VST or AU version of the plugins in the list, and hit ok.

When you first apply any ERA plugin effect to a sound and press edit in the “effect controls” panel, the activation window pops up, and you have to enter the serial number you received from your purchase. You can also try the plugins for free for 14 days.

The ERA series of plugins consists of six plugins for the “standard” version and seven for “pro”. They are:

You can see the full list of their plugins within the ERA bundles on their website here.

Each one of these plugins fixes a specific problem. I like the idea to have one tool for one task and not a one-do-it-all plugin with buttons and settings all over the place.

Also, the concept of the ERA plugins is that inside a plugin, you only have one knob to turn. You don’t need to have extensive knowledge of audio post-production to make it work. Turn the knob and let it do the job for you until it sounds to your liking. I don’t have any idea about “how” it works under the hood, but it works to a certain point.

Of course, inside each plugin, there are a few other parameters that you can adjust, but not a ton. For example, you can adjust the output gain or the breath control in the ERA Voice Leveler plugin.

For this test, I did a couple of recordings that are specific for each plugin. Of course, I tested each plugin in “real life” projects, but due to confidentiality issues, I cannot share recordings from paid gigs.

Back to this test, I used a Sound Devices MixPre-6 as my recorder with the built-in pre-amps. I recorded everything in WAV, at a sample rate of 96kHz, and a bit depth of 24. To make it more realistic, I used two channels and two microphones:

Here are the results for each plugin. Please, note that:

Indeed, I advise that you use a set of headphones to have a better idea of the results.

To me, the Accusonus ERA 4 plugins work pretty well. I tried this on numerous other “real life” projects, and they did a great job with very few tweaks. The ERA plugins run perfectly smooth and in real time on my MacBook Pro, except for the De-Clipper, which needs a little bit more processing, I guess. The good thing is, Premiere never crashed because of the plugins.

Of course, the better your original sound recording is, the better the results. But, if you need to quickly fix some audio mistakes you made, without a lot of effort, the ERA plugins are the right solution.

The ERA 4 plugins are available now through the Accusonus website. The upgrade to version 4 is free for all existing customers of the ERA Bundle Standard and ERA Bundle Pro.

The ERA Bundle Standard costs $149 and the ERA Bundle Pro is $349. Head over to their website to learn more or purchase. Alternatively, you can also buy them at B&H, through the links below.

Did you already try the ERA plugins? Do you think they could be a useful part of your toolkit? Let us know in the comments down below!