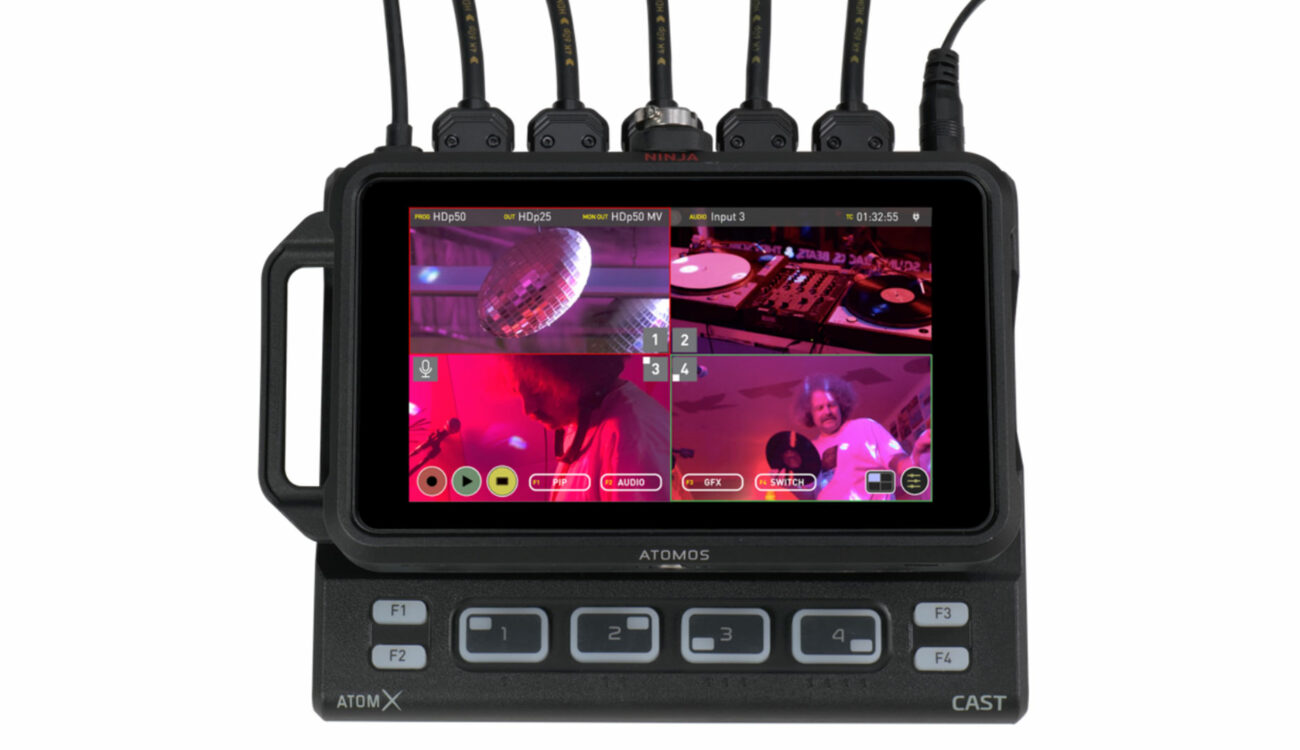 Atomos has just announced a new AtomX expansion module: the Atomos AtomX CAST. This module is compatible with the Atomos Ninja V and Ninja V+ monitor-recorders and basically transforms your unit into an advanced four-HDMI switcher. Let’s take a closer look at it!

Atomos is on fire lately! Indeed, in late April this year, they launched the Atomos Ninja V+ and Ninja Stream. The Ninja V+ monitor-recorder has incredible capabilities, including support of up to 8K30p and 4K120p Apple ProRes RAW recording over HDMI and SDI. But, unfortunately, the Atomos Ninja Stream will be launched as a rental-only unit at first, which was not the most exciting news for most users.

If you want to add functionalities to your Ninja V/V+ monitor-recorder, you have to use Atomos’ own AtomX expansion port. However, a couple of modules are already available, including the AtomX SDI and AtomX SYNC. To give filmmakers more options, Atomos has just released the AtomX CAST, which can turn your Ninja V/V+ into a powerful and compact multi-input switcher.

The Atomos AtomX CAST is one of the biggest expansion modules of the entire AtomX lineup and takes the concept to another level.

Indeed, you’ll have to insert your Ninja V/V+ onto the CAST module, plug the AtomX port, and secure the monitor-recorder to the CAST module via a screw at the top of the unit. You’ll end up with what looks like a totally new product.

At the bottom of the CAST module, you’ll find four function buttons and four camera selection buttons. All buttons are illuminated to easily see which camera is airing and which one should be selected next. Also, you can use the Atomos Ninja V/V+ to switch between all your sources directly.

At the top of the unit, you’ll find four HDMI input ports, one HDMI output (program) port, an AC input, and an USB port.

With four HDMI inputs “offering professional broadcast quality switching and recording to high-quality professional codecs like Apple ProRes and Avid DNx,” the CAST module seems like a very versatile unit. But the main use for this expansion will probably be the live-switching mode.

Indeed, the USB port at the top of the Atomos AtomX CAST expansion module can be used to load logos, lower third titles, or masthead graphics on top of your videos. Then, you can connect the AtomX CAST to your computer – with UVC support your computer will see it as a webcam – to live-stream your program output. Of course, you can live-stream to various platforms like Zoom, Skype, Twitch, Facebook Live, and so on.

With the Ninja V/V+ docked into the AtomX CAST, you can use the 5” touchscreen for setup operations. Also, your monitor-recorder doubles up as a more “traditional” monitor with all Ninja V/V+ built-in monitoring/exposure/focus tools. Then switch to multi-view to see all four inputs at once, complete with audio level monitoring.

Last but not least, the Ninja V/V+ HDMI output can be used as a secondary output that can be set up as a duplicate program out, preview monitoring, or a dedicated multi-view output.

What do you think about this new AtomX CAST expansion module? Do you think it could be a more efficient solution compared to the Blackmagic Atem Mini Pro/Extreme? Don’t hesitate to let us know in the comments down below!