Blackmagic Design announced several small updates at IBC. The B4 mount URSA Mini is one update that could be quite significant. Check out our elaborate talk with Simon Westland. 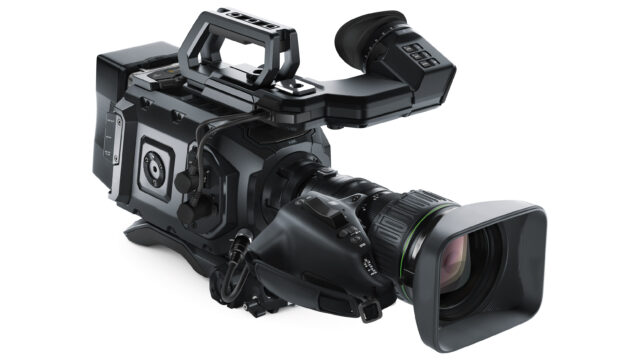 The B4 Mount is a standard used in broadcast to support ENG lenses on ENG cameras. What is interesting about Blackmagic’s approach with the B4 Mount URSA Mini, is that they built a $295 “adapter” that fits on the Blackmagic URSA Mini PL and powers the lens and connects the electronics via a cable.

You might say: “Oh well, it’s just an adapter”, but hold that thought, there is actually more to it. This “adapter” actually replaces the PL mount as in that you will have to screw it into the camera body.

Furthermore your ENG lens will vignette on that super35mm sensor, so they built a lens element into the adapter that will blow up the image to match the camera’s sensor. It seems like this will only work in HD crop mode though.

The benefit here clearly is that you can get an ENG lens that is unmatched in terms of ergonomics by anything available in the normal “large sensor” lens market. You have a lens that retains the focus throughout the range, has a built in handle and smooth zoom motor, very convenient for action handheld style shooting or broadcast work.

A 4.6K large sensor image with B4 lens ergonomics? 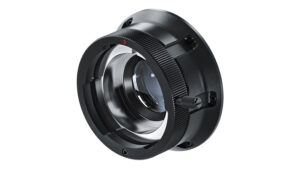 Well there are some possible pitfalls here.

[UPDATE]: It seems as though the B4 adapter will only work with the camera’s HD windowed mode. It is unclear in the press release that only states “The Blackmagic URSA Mini B4 Mount is designed to replace the existing PL lens mount on Blackmagic URSA Mini PL, turning it into a B4 camera for HD.”

Our writer Richard Lackey has hands-on experience with this kind of lenses and raises another good point to think about when it comes to B4 lens quality and the idea to use them in a 4K environment:
“One main consideration in this setup is that most B4 lenses are not designed for and wouldn’t be sharp enough for adequate 4K performance, especially the older ones that many people may buy used. So using HD B4 lenses really only makes sense for HD output, any limit in resolving power of these lenses would be further compounded with the optical enlarger in the adaptor, so the optics in any case would never be capable of producing a good 4K image.”

In their press release Blackmagic Design addresses the quality point saying “The B4 mount also features spherical aberration correction so customers can use their lenses wide open with no blooming effect.”

Another point to mention is that when you optically blow up an image designed for a 2/3 inch sensor you will use light, meaning the lens will becomes slower (less light sensitive).

It remains to be seen how the B4 Mount URSA Mini will fare in a real life shooting environment. We will certainly keep our eyes on this one and test it as soon as we can.

A deal breaker that I should mention is of course that these lenses are very expensive, priced north of anything the camera body and accessories will cost. For people, especially broadcasters who already own B4 lenses the B4 Mount URSA Mini could be a significant announcement.

The Blackmagic URSA Mini 4K is starting to be delivered, while we’re still waiting for the release of the URSA Mini 4.6K that is scheduled for the end of October (LINK)