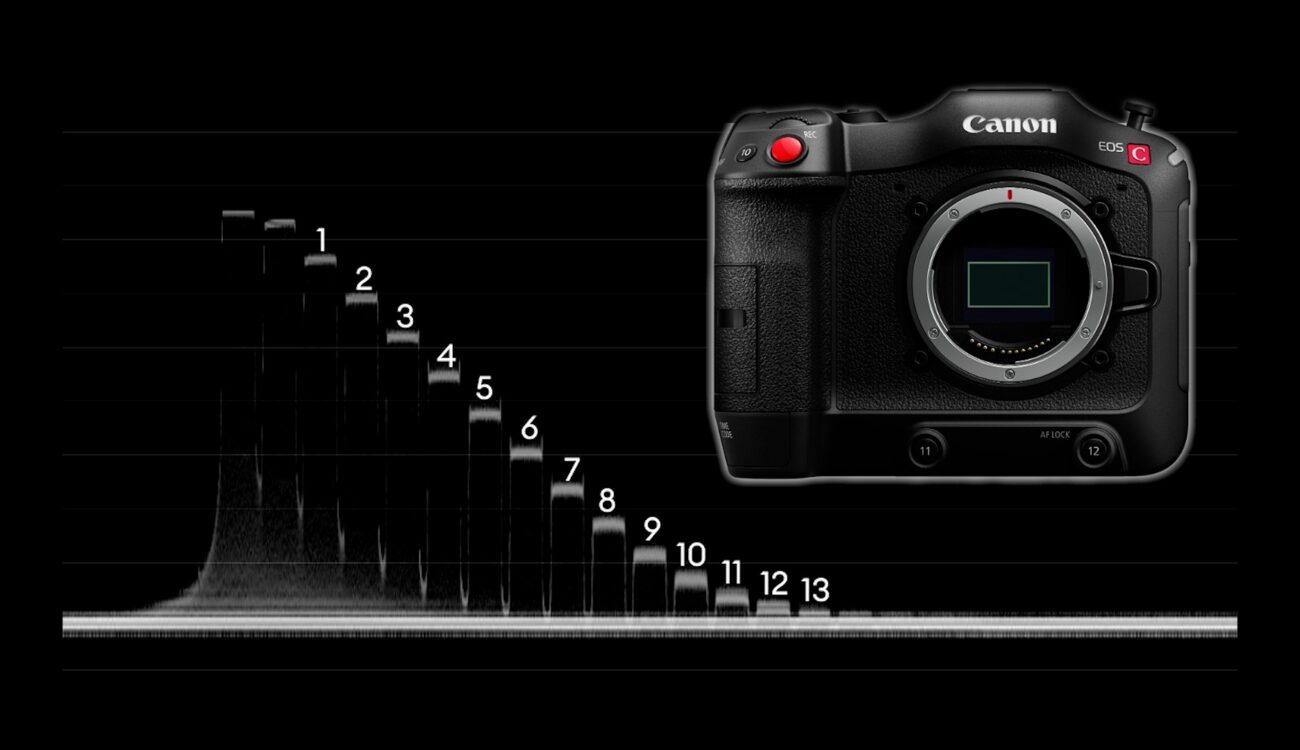 by Gunther Machu10 days ago

With a recent firmware update in March, the Canon EOS C70 can now shoot in Cinema RAW Light LT. The Canon EOS C70 shares the same dual gain output sensor (DGO) as the Canon EOS C300 Mark III that we tested here. Curious to hear how it performs? Then read on …

The Canon EOS C70 was introduced a while back, in September 2020 to be precise, and over the years it has seen numerous firmware updates, it has been approved by Netflix, and of course it has received the FilmConvert treatment. In March 2022, it got another major firmware upgrade that now allows the EOS C70 to record Cinema RAW Light LT internally. Now it’s time to put this little film camera through our lab test! So let’s take a look.

This rolling shutter value applies from 25 – 60 frames per second. Once we shift the sensor to 75 – 120 fps, the dual gain output is not active any more and the rolling shutter drops to 7.7ms.

Dynamic Range of the Canon EOS C70 at ISO800

If you are not familiar with how we test the dynamic range of cameras, please have a look here.

Let’s have a look first at the new Cinema RAW Light LT mode in 4K DCI at ISO800. When developing the RAW files to Canon Log2 in Davinci Resolve we obtain the following waveform:

About 13 stops can be identified above the noise floor, as well as a 14th and a faint 15th. That is a really good result, confirmed by IMATEST:

In XF-AVC Long GOP C-Log 2 (from 60-120 frames per second) the dual gain output is not active and we loose about 1 stop:

Interestingly, when you look at the lower graph above I made a circle around the darker stops close to the noise floor – comparing this area with the IMATEST graph when DGO is active, you can clearly see how DGO lowers the noise in the darker stops (hence gives higher dynamic range).

As mentioned in previous articles, latitude is the capability of a camera to retain colors and details when over / underexposed and pushed back to a base reference level.

For our CineD studio tests the base exposure level refers to a waveform value of 60% on the forehead of our subject Johnnie (using Cinema RAW Light LT at ISO800, developed to C-Log2 in Resolve):

From here we start to overexpose until the red channel is at the cusp of clipping on Johnnie’s forehead:

From here, we underexpose the scene successively, until we reach 3 stops below base exposure, pushed back (3 stops can still conveniently be adjusted in the camera raw tab using the exposure slider in DaVinci Resolve – above that, the lift, gamma & gain controls are used):

At 3 stops under, noise starts to kick in. It is finely dispersed and looks rather good, so no need for noise reduction in my opinion.

At 4 stops under, pushed back noise becomes very dominant, and a slight greenish tint as well as larger vertical greenish / pink areas appear:

Using noise reduction in DaVinci Resolve, the image can be cleaned up nicely – see also the settings depicted below:

Unfortunately, noise becomes atrocious, and colors start to fade to brownish / greenish cast. Also, the larger vertical bands of green and pinkish areas are very obvious. Unfortunately, even massive noise reduction cannot save this image and it is “game over”:

That would have been 9 stops of latitude. The image still looks surprisingly OK compared to other cameras – but to me it is not really usable any more.

The Canon EOS C70 with the recent Cinema RAW Light LT upgrade performs very well in our lab: rolling shutter values are quite good (DGO active) to very good (DGO inactive), the dynamic range with 12.3 stops at SNR = 2 for RAW and 12.8 stops for XF-AVC Intra are second best we have ever measured so far for a Super 35 sensor. The benchmark for Super 35 remains the ARRI Alexa classic with 13.8 stops at SNR = 2 (lab test here).

In the latitude test the results are similar: 8 stops of exposure latitude in our standard CineD Studio scene is on par with even the best full frame cameras. With the benchmark again being the Arri ALEXA Mini LF showing 10 stops of latitude (5 stops over, 5 stops under).

Have you shot with the Cinema RAW Light LT upgrade of the C70 yet? What are your experiences? Let us know in the comments below …