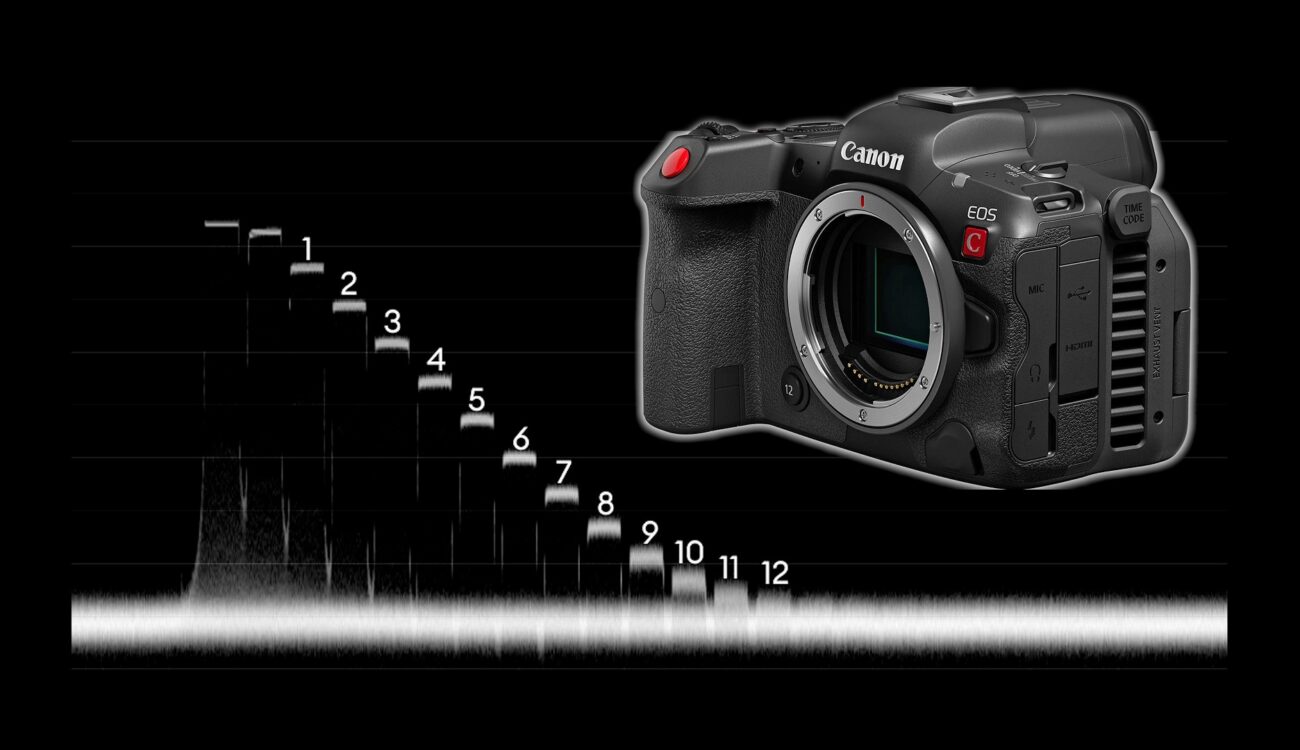 After lab testing the Canon R5 with internal Canon RAW here and external ProRes RAW here, we are now running the new Canon EOS R5 C through our lab test procedures. Interested how it fares in comparison? Then read on …

The Canon R5 showed a bit of a mixed bag when running it through our lab, as it showed quite promising results in Canon RAW, however with a very noisy image.

But it fell short in internal 8k H.265 recording, exhibiting a rather low dynamic range (10.1 stops at a signal-to-noise ratio (SNR) of 2 with CLog 3) – mainly because the noise floor of the camera was cut off with no further stops available.

Now we were quite curious to see if that behavior would be different with the Canon EOS R5 C – “C” for the cinema version? Spoiler alert: yes and no.

The rolling shutter is exactly the same as for the R5 – we measure 15.5ms for 8K DCI full frame mode (less is better):

Before we start, the Canon EOS R5 C has a dual native ISO sensor with ISO800 and ISO3200 as the two base ISO’s, both for Canon RAW and CLog3. Quite interesting, as the Canon R5 had ISO400 as the base ISO for Canon RAW. If you haven’t read it yet, see how we test dynamic range here.

Canon 12 Bit Cinema RAW Light LT 8K ISO800 – I developed the CRAW in DaVinci Resolve to CLog2 as this should give the best dynamic range (the “Color Boost 20” setting was used for the latitude test further down, for dynamic range “Color Boost” was at 0):

Again, CRAW is very, very noisy, as can be seen from the waveform below:

I am not even sure if I should count the 12th stop to be honest. There is an additional 13th stop visible in the noise floor, and a very faint 14th. This looks very much like the externally recorded ProRes RAW of the Canon R5 – the internal Canon RAW of the R5 at ISO400 was much less noisy. IMATEST confirms this:

10.2 stops at SNR = 2 and 11.5 stops at SNR = 1 are measured. Even a bit less than the R5 in RAW, as the noise levels are even higher (see the lowest graph above on the left side – almost 3% are reached in comparison to around 1.5% noise for the R5). As can be seen in the middle graph above the blue 11.5 line, there are about 3 if not 4 additional stops buried in the noise floor.

In theory, these can be “excavated” by noise reduction in post-processing. However, in reality there is almost no code value difference between these stops in the noise floor, so a lot of color banding and other nasty artifacts can be expected when doing so.

See below in the section “Latitude” how these lower stops look like when buried out. Spoiler: not good.

Canon 12 Bit Cinema RAW Light LT 8K at ISO3200 – have a look at the waveform and IMATEST result below, at the higher native ISO setting about 0.6 stops are lost vs. ISO800:

So far so good – in summary, if you plan on using Canon RAW you should also plan to use heavy noise reduction in post. Which can be quite taxing on your system.

Will the R5 C behave different? Fortunately, yes, it does. The behaviour exhibited below is probably due to massive internal noise reduction, but in turn you get dynamic range results which are catching up with the competition. So far however, only CLog3, no CLog2 gamma curve is available on the R5 C. Have a look at the waveform plot below:

With those values (11.7 stops at SNR = 2 and 12.7 stops at SNR = 1) the R5 C manages to almost catch up with recent consumer full frame cameras like the Panasonic S1H, S1 or S5 or the Sony A1 but stays at the lower end. And, you get about 2 usable stops more than with the Canon R5 in internal 8K H265 CLog3 recording.

4K XF-AVC using CLog3 at ISO 800 – in this mode the Canon R5 C seems to properly downsample from the 8K sensor resulting in slightly better dynamic range results. Let’s have a look at the waveform first:

As can be seen, there is even less noise than for 8K H265 due to the downsampling. However there is one very important factor to keep in mind: while with downsampling and internal noise reduction (or even post noise reduction) the lower stops like the 12th and maybe a 13th will be much cleaner and thus more usable, there is still the issue that there is almost no code value difference between the 11th and 12th stop and nothing between the 12th a potential 13th stop that is still visible within the noise floor.

Hence, if you underexpose and push those stops up you will have to spread out these stops and thus get banding, loose color information and all sorts of other issues. Competing cameras in that price bracket like the Panasonic S1H or the Sony A1 (or also the Canon C70) still show a significant code value difference between the 11th ,12th and even a 13th stop – spoiler: which also explains the better latitude results of these cameras as can be seen further down below. And that is one of the reasons why the latitude result is so important – it reveals those sort of issues regardless if noise reduction is used or not.

Let’s quickly have a look at the IMATEST result for 4k XF-AVC at ISO800 CLog3:

Latitude is the capability of a camera to retain details and colors when over- or underexposed and pushed back to base exposure. Some time ago, we have chosen an arbitrary value of around 60% luma value (in the waveform) for our subjects’ forehead in our standard studio scene. This CineD base exposure should help our readers to get a reference point for all the cameras tested, regardless of how they distribute the code values and which LOG mode is used.

From here, we open up the iris of our lens to T1.5, giving us 4 stops overexposure above our base exposure scene:

The red channel on Johnnie’s forehead is close to clipping, but all is fine. From here, we successively underexpose by closing the iris and lowering the shutter angle in 1 stop increments until we reach 3 stops of underexposure:

Heavy noise is raising its ugly head, also, larger patches of pink and green chroma noise are showing up. See the area to the right of the white sheet of paper, for example.

Using noise reduction in Resolve, we get a usable image:

With the Canon R5, the limit was reached already at 3 stops under. So, let’s have a look if we can push the R5 C further to 4 stops under:

Noise reduction helps a bit, but cannot save it. Hence, game over! In Canon Cinema RAW Light LT, we get 7 stops of exposure latitude. Which is about 1 stop less than the Panasonic S1H, S1 and S5 as well as the Sony A1 for example.

Our current benchmark in the lab is the ARRI ALEXA Mini LF with 10 stops latitude (5 over, 5 under).

I also had a look at the internal 8K H265 CLog3 recording to see if we can reach further into the shadows with the internal noise reduction of the Canon R5 C:

That looks quite OK still. At 4 stops underexposure, unfortunately the same picture as above:

Again, at 4 stops of underexposure, pushed back we get nasty horizontal and vertical stripes as well as larger blotches of green and pink chroma noise. Noise reduction helps only partially:

At 4 stops under for 8K H265 CLog3 (10bit), using noise reduction colors faint and become greenish (have a look at the dark side of Johnnie’s face). Also, the static images shown here do not reveal what can be seen in the moving image: noise is atrocious, and noise reduction only helps to a certain extent before rendering the image into a useless, plasticy mess if overused.

Hence, we get the same result as for Canon RAW: 7 stops of exposure latitude. I have to say, however, that the Canon RAW files look better – as it should be for a 12bit vs 10bit codec.

The Canon EOS R5 C shows a mixed bag in our lab test. Rolling shutter values are quite good (but not exceptional), the internally recorded Canon 12 bit Cinema RAW Light LT is super noisy – so you have to plan applying noise reduction in post.

The internally recorded 10bit 8K H265 CLog3 (no CLog 2 available yet) shows a real improvement over the Canon EOS R5, but dynamic range is still quite average looking at the competition from Panasonic and Sony in that price bracket.

Have you used the Canon EOS R5 C already? What are your experiences so far? Please tell us in the comments below…