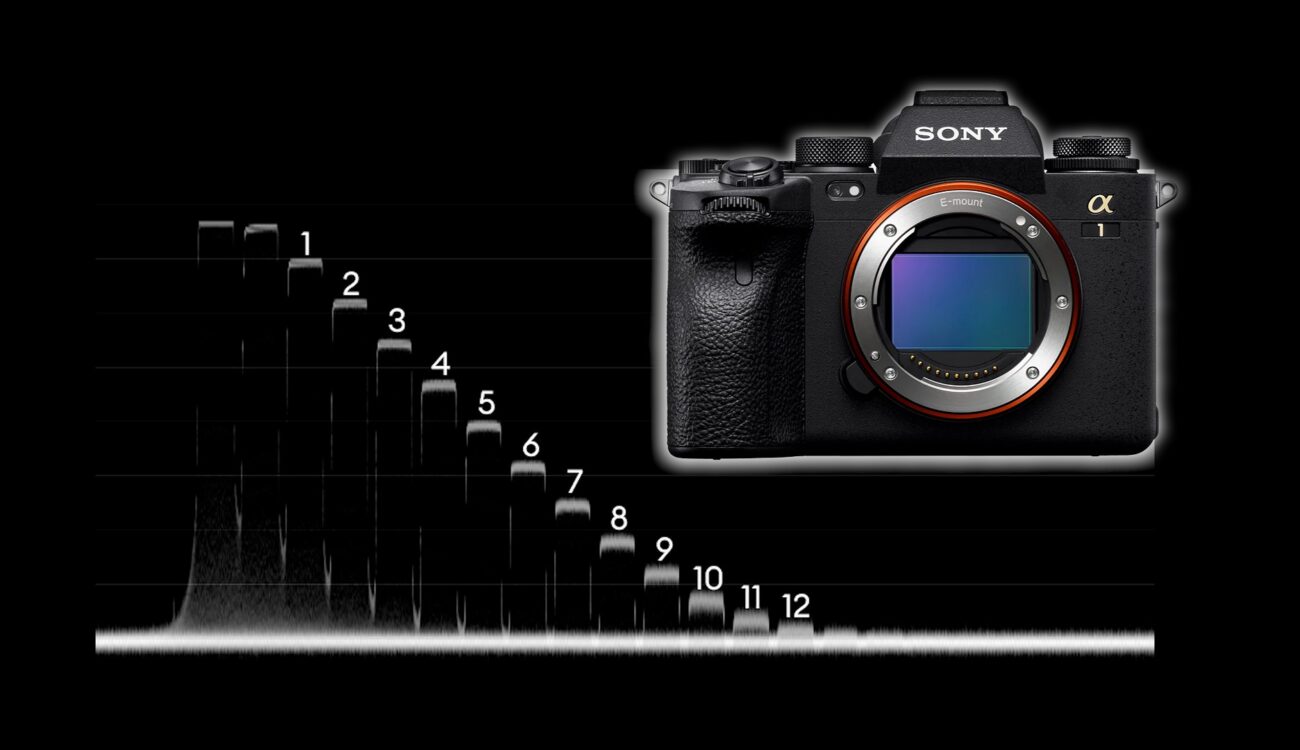 We recently put Sony’s new flagship of the Alpha series, the A1 through our lab test procedures – curious to hear how good it really is? Then read on …

After testing the Sony a7S III some time ago, it was nice to hold a Sony Alpha camera in my hands again. I really do like the rather small physical size and weight in comparison to other full-frame cameras like the Panasonic S1 or S1H for example.

Under the hood, the Sony A1 offers spectacular features (read more about those here), like internally recorded full-frame 8K up to 30 fps or 4K 120fps, all in 10bit with proper LOG encoding in S-Log2 and S-Log3, and an additional ProRes RAW recording possibility with the external ATOMOS NINJA 5 recorder (see our article here). Also, my dear friend and colleague Johnnie made a review of the camera including one of his special “Johnnie signature” mini-documentaries here.

Thanks to NVIDIA we have a loaner RTX3090 card at our office, and believe it or not, using the 8K H265 files on an 8K (7680×4320) DaVinci Resolve (17.2) timeline was effortless and rather fluid. GPU memory usage was around 10GB, with the GPU running at around 30% load. Adding noise reduction (3 frames temporal and spatial) of course causes a massive drop of playback, but you still get about 8 fps with the settings depicted further down in this article (5 stops under with noise reduction) – of course, GPU load is then hovering around 90% and 16GB memory is used. This is really astonishing, as most graphic cards are stumbling already to playback 4K H265 files on a FullHD (1920×1080) timeline. In 8K, we are talking 33 megapixels of resolution per frame (UHD = 8.3 megapixels)! Impressive! But now, let’s jump into the lab results!

Rolling Shutter of the Sony A1

Dynamic Range of the Sony A1 at ISO800 using internal recording

That is consistent with the IMATEST result at 8K resolution (full-frame), showing 11.9 stops of dynamic range at a signal to noise ratio of 2 (SNR), and 13.2 stops at SNR = 1.

Also, in the middle graph of the 3 diagrams above the SNR = 1 line (blue) about 1 – 1.5 more stops are identified by IMATEST.

Now, let’s have a look at the downsampled 4K (UHD) full frame image of the Sony A1 shooting internal UHD XAVC HS:

As you can see, shooting in UHD full frame on the Sony A1 there seems to be some sort of downsampling happening internally, which combines pixels and therefore reduces the noise, leading to better dynamic range results: 12.7 stops for SNR = 2 and 13.8 stops for SNR = 1.

Switching the Sony A1 to external RAW recording over HDMI, using the Atomos Ninja V we are getting a more noisy image, but the dynamic range result in IMATEST (compared to internal 8K recording) increases to 12.3 stops at SNR = 2 (13.3 stops at SNR = 1), see below. Obviously, for external ProRes RAW recording again some sort of downsampling of the full sensor resolution to 4328×2446 ProRes RAW is happening, thereby increasing the dynamic range results at the SNR = 2 and SNR = 1 thresholds.

Sidenote: for some reason, we couldn’t get the external ProRes RAW recording to work with the Sony A1 – files were showing fine on the Ninja V, but corrupted when played back on the Ninja or in Premiere Pro. Earlier this week a new firmware for the Ninja V was released, which solved our issues. But unfortunately, that meant there was no time to redo the latitude test in ProRes RAW. But I am glad at least with the help of my colleague Florian we were able to repeat the dynamic range test.

The waveform plot again reveals solid 12 stops, also a rather solid 13th stop can be seen as well as a faint 14th stop:

Also, the IMATEST ProRes RAW results show about 2 more stops buried in the noise floor above the 13.3 stops SNR = 1 threshold (blue line in the middle graph above).

Those are really good results, representing the state of the art of what is possible with consumer 12bit A/D camera sensors – actually surpassing the Panasonic S1H, S1, S5 for example. The Canon R6 falls way behind in that comparison (see our lab article here), and the Canon R5 reaches a similar level (article here) only when shooting internal RAW – and this is a very unique feature of the R5 that no other SLR style, full-frame camera in this price bracket offers yet. And yes, there is of course the lovely Z CAM E2-F6 that shoots internal ZRAW – but ZRAW is another story on its own, see our article here.

To me, the image of the Sony A1 looks more natural, less processed than the one of the Sony a7S III (which is hampered by too much internal noise reduction that cannot be turned off).

Latitude tests with the Sony A1

Latitude is the capability of a camera to retain colors and detail when over- or underexposed and brought back to reference exposure. It is very revealing, especially when underexposing, how well the codecs hold up and especially, what the noise structure looks like.

As mentioned earlier, due to our issues with the Atomos Ninja V we were not able to do the latitude test in ProRes RAW, so we used internal 8K H265 recording instead.

As usual, for our underexposure test, we arranged the scene by adjusting the studio light so that my colleague Johnnie’s face stayed a tad below clipping (the red channel) – at F1.4 and 360° shutter angle (using an 85mm T1.5 Zeiss Compact Prime). Stopping down from there in 1 stop increments we eventually reached a luma value of around 60% – this is our base exposure (for the records, it is not always exactly the 60% value as it depends a bit on how code values are distributed with the respective LOG curve).

From there, we continue to underexpose by stopping down the iris of the lens until F8 is reached, then shutter angles are reduced to allow further reducing the exposure. For all shots, 8K internal SGamut3.Cine/S-Log3 at ISO800 settings were used on the Sony A1.

Now let’s have a look at the first shot. As expected, the 4 stops above base exposure image clip Johnnie’s forehead (and a few patches of the DSC Color checker on the left, as do all Sony cameras with S-Log3), hence the first usable image is at 3 stops above our (arbitrarily chosen) base exposure studio scene:

Not much to see from 2 stops over, 1 over, etc… so lets jump ahead to the 3 stops underexposed scene, pushed back to base exposure:

A fine noise starts to appear, but all looks perfect – no color shifts, no stripes across the image, nothing. Very good, let’s move on to 4 stops under, pushed back:

Again, looks very good! So let’s see what the 5 stops under, pushed back image reveals:

Luma and chroma noise becomes very evident in the image, especially in the darker parts of the image – on the dark side of Johnnie’s face for example, or look at his T-shirt.

A bit of noise reduction in DaVinci Resolve (see settings below) does a very good job on removing excessive noise and I find the 5 stops under absolutely fine:

And here, at 6 stops underexposure, pushed back the image cannot be recovered anymore – large blotches of chroma noise along with heavy luma noise corrupt the image to an extent, that even when using heavy noise reduction the colors cannot be re-established:

As can be seen above, shadows become pink, the image shows heavy banding and cannot be fully recovered – game over.

Nevertheless, we have to state that 8 stops of exposure latitude (3 above to 5 below) is a state of the art result for a consumer sensor, again in line with a lot of other cameras in this price bracket and below, like the Panasonic S1H, S1 and S5. A cinema camera with a more sophisticated sensor design like the ARRI ALEXA Mini LF (tested here) for example shows 10 stops of exposure latitude in our studio scene.

As anticipated, the Sony A1 shows state-of-the-art consumer camera results in the lab test in all disciplines: rolling shutter, dynamic range, and latitude, using the internal codecs. This camera clearly shows that old paradigms like the need for large pixels to achieve good dynamic range are not true anymore. After all, we are talking about a 50 megapixel sensor here!

To me it seems rather clear that as long as these cameras use the current 12bit sensor read out architecture for video we cannot expect much more than these results. Just for your reference, the benchmark so far is the ARRI ALEA Mini LF which exhibits about 2 stops more in the dynamic range and latitude discipline.

Have you already used the Sony A1? How do you like the image? Let us know in the comments below!