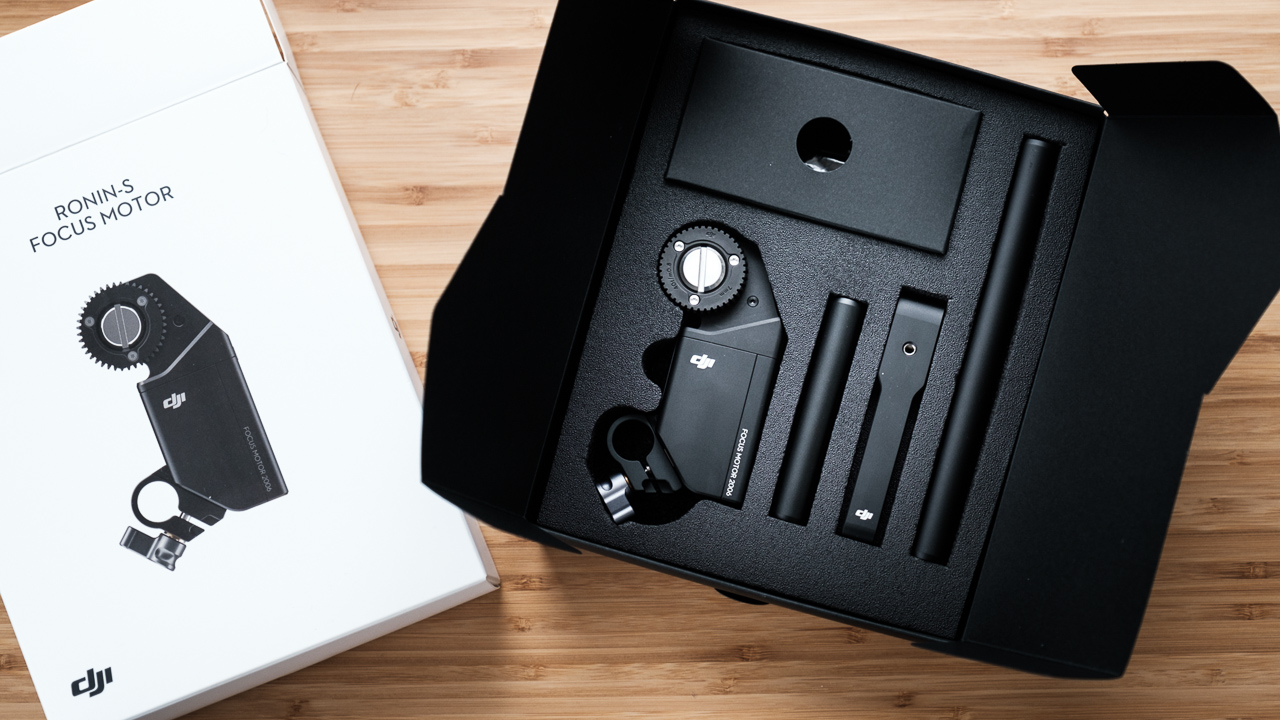 The DJI Ronin-S is designed in a way that adding accessories makes it even more useful. Let me share my first impressions of the DJI Ronin-S Focus Motor — an accessory that opens up many creative possibilities. 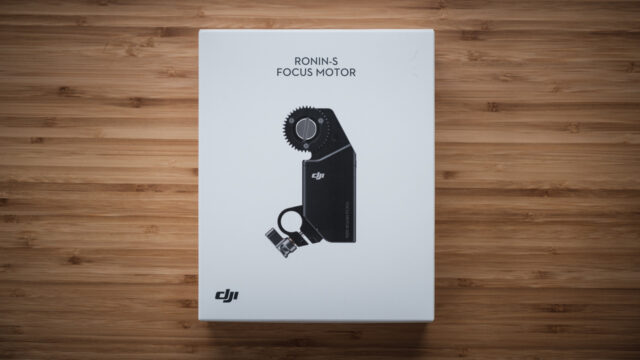 In an article published a while ago, I have reported about my Ronin-S setup and shared my thoughts with you (also watch Nino’s extensive Ronin-S video review and tutorial here, in case you missed it). Now I have added the DJI Ronin-S Focus Motor to my kit, which remedied the last gripes I had with the gimbal.

What’s in the Box?

The motor comes in a nice cardboard box, which includes the motor itself, a connection cable, the Ronin-S rod-mount, a short rod, a long rod, four hex screws and two .8-pitch rubber focus gear strips.

These allow lenses without .8 focus gears to be used with the motor.

The build-quality of the device is very high as we have gotten used to with DJI gear.

I could not detect any play on the motor’s gear and everything feels solid and neatly put together. 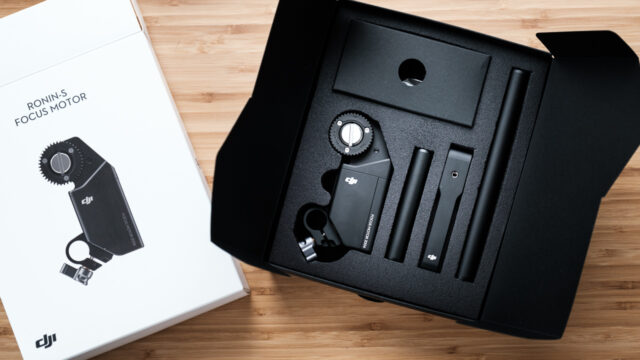 The rod-mount bracket is screwed to the small camera base-plate that comes with the Ronin-S with two of the hex-screws from the motor-kit. The hex-key that came came with the Ronin-S fits. No extra tools are needed. Very nice!
Depending on your camera you can mount the rod to the left or right of the lens. 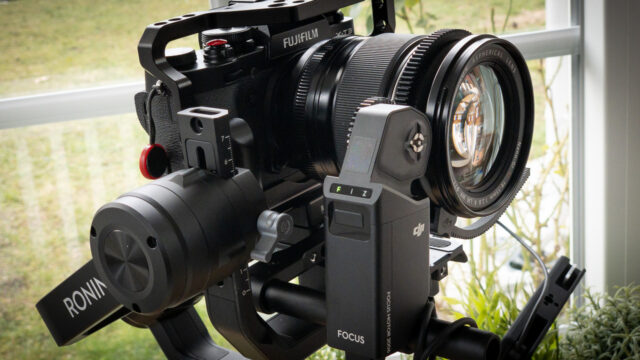 The included focus strips are made from a rubbery material that can be cut to the desired length easily. The fastening mechanism of the strips just engages into the teeth of the gear and there is no way of tightening. In order to fasten the strips around the lens barrel, they must be applied with some tension. That is not ideal, but with a rubberised focus-ring on the lens I could not detect any slippage between the lens barrel and the gear strip. 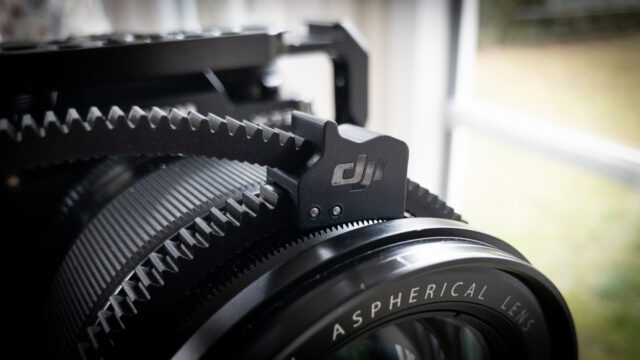 I also tested a few Samyang/Rokinon EF cine lenses. (24mm, 35mm and 50mm). These lenses have .8 pitch gears already built-in. Using them with the motor worked like a treat.

By the way I’m using a simple mechanical X-mount to EF adapter by K&F Concept which works great because the Samyang/Rokinon lenses are fully manual. 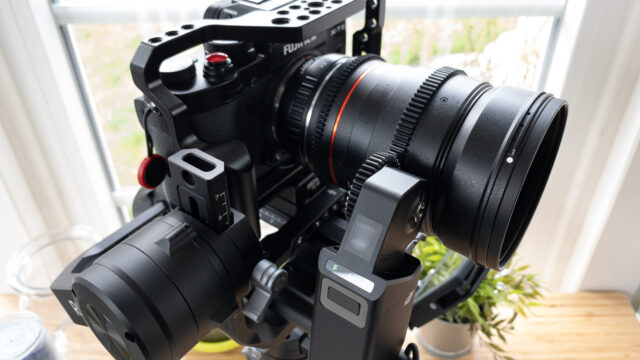 A supplied cable connects the motor to one of the 12V/2A ports underneath the sled where the camera sits. Without further configuration the motor just works: you can now pull focus using the focus-wheel that came with the Ronin-S. When the motor is not calibrated it does not turn indefinitely but has preprogrammed stops.

A little tip at this point: when you press and hold the little button next to the LED on the thumbwheel, you can reverse the direction of the focussing. 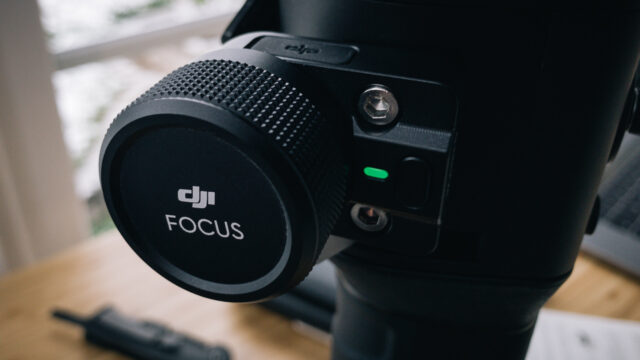 If you are working with a lens that has hard-stops on its focus ring, calibrating the motor is a breeze. Double-press the button on either the thumbwheel or the motor itself and the motor will find the hard-stops and calibrate itself automatically to them.

Things are a little bit trickier with lenses — such as most photographic focus-by-wire AF lenses — that have no hard-stops. To calibrate where the motor’s cog should stop turning the focus-ring one has to initialise auto-calibration by double-clicking the multi function button on the motor or on the thumbwheel.

The motor starts turning the focus-ring in one direction and one has to stop it by hand to »fool« the motor into thinking it hit a hard-stop. When it starts turning the other way you need to hold the focus-ring and again »fool« the motor. Of course it’s tricky to stop the motor exactly where the lens is set on infinity or close-focus before it stars »slipping«. I did not manage to calibrate the FUJIFILM XF 16-55mm precisely after a couple of tries.

I really doubt it’s possible to calibrate any focus-by-wire lens to a degree that makes repeated precise focussing feasible. When shooting using a handheld one-man-gimbal distances tend to »float« anyway, so there’s really no point in having precise focus points marked out. Operators need to rely on peaking, eyeballing (and using the Force) to nail focus.

The motor does create some noise that definitely will be picked up by a microphone attached to the camera. However it’s silent enough not to pose a problem on set, when dual-system sound is recorded with a boomed- or lav-mic in most situations.

One thing to keep in mind is the fact that the DJI Ronin-S Focus Motor is rather heavy and will add considerable weight to the rig. Its also quite thick which could potentially pose a problem, if used on smaller lenses.

Autofocus on mirrorless cameras has come a long way in the last couple of years. Nevertheless it’s often necessary to have manual control over where exactly you are focussed and when.

If you are flying a Blackmagic Pocket Cinema Camera 4K on your Ronin-S you are out of luck with autofocus anyway. The DJI Ronin-S Focus Motor is a great benefit in this case.

When you are using manual-focussed photographic or cine-lenses on the Ronin-S — especially ones with hard stops — the DJI Ronin-S Focus Motor really shines.

Operating the Ronin-S and pulling precise focus with the thumb-wheel at the same time requires a lot of practice by the operator.

Hopefully DJI will be able to improve on the calibration-procedure of lenses with no hard stops.

Considering the low price of currently $169, I think the DJI Ronin-S Focus Motor is a no-brainer to have in your Ronin-S kit. 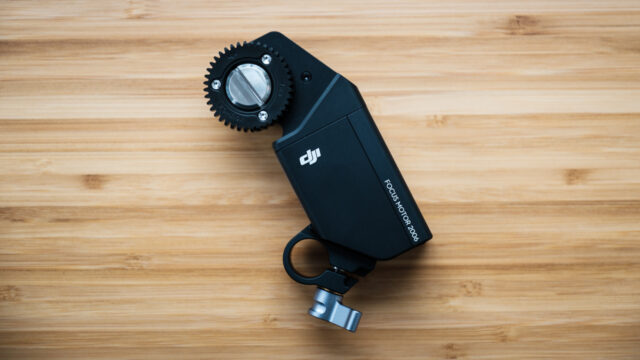