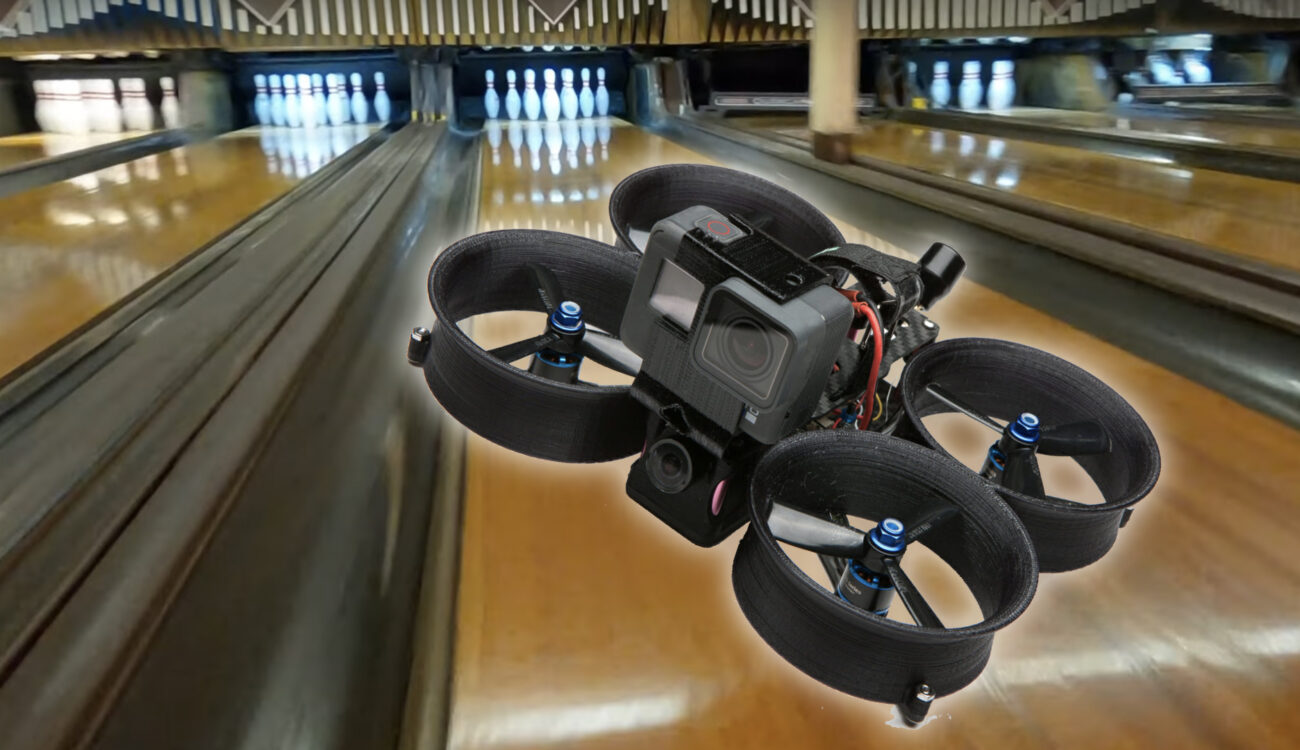 You may have seen our interview with DJI’s Creative Director Ferdinand Wolf about the new DJI FPV (first person view) drone. He talks quite extensively about so-called Cinewhoop drones, tiny DIY drones for FPV racing – or video – applications.

The video has already received a cool 1.6 million views on YouTube in just a few days. And it’s easy to see why: the whole thing was shot in just one take (though it took the team a few attempts to perfect it) and it features a roller coaster ride through the Bryant Lake bowling alley in Minneapolis. Everything from the lighting, acting, sound design, flight choreography and timing was carefully considered and planned to create a seamless experience.

My favorite part (aside from the perfect ending “scene,” of course) is the reference to a classic line from “The Big Lebowski”:

Mark it in Dude. – This is bowling, there are rules!

quote from “the Big Lebowski”

The whole thing has been overdubbed, so everything you hear has been carefully edited to provide a coherent viewing experience. Otherwise, you probably would have heard only whirring propellers….

The filmmakers used what’s called a cinewhoop drone, a tiny, mostly DIY drone with protected propellers to make flying near people safer and to protect the drone in case it crashes (and that’s what it will most likely do quite often). The drone is an FPV drone, which means it streams video from its tiny onboard camera directly to the goggles of the pilot controlling the drone.

This camera doesn’t provide a very good image quality, so another camera, in this case a GoPro 8, is mounted on the drone. It records to its own SD card and the pilot cannot see what the exact frame is, he has to “guess” the offset to the onboard cam. Also, you can’t tilt the backpack camera at all, a fact that causes problems since these tiny racing drones themselves tilt quite a bit as they gain speed.

All in all, this is a pretty remarkable video, I’d say, and it certainly takes a lot of time to practice flying an FPV drone to get results like this.

Another good example of what’s possible with these types of tiny drones is the video below from 2017, where a deconstructed GoPro was used to save weight (and the video plays backwards – see making of here). Also, the video was stabilized a bit in post-production:

With the release of the new DJI FPV drone, getting into this game just got a little easier and you don’t have to fiddle around with nerdy gear as much (unless you want to, of course). So maybe videos like this can serve as inspiration?

What do you think? Is FPV drones something you’d consider diving into? Maybe even more with the release of the new DJI FPV? Share your thoughts in the comments below!