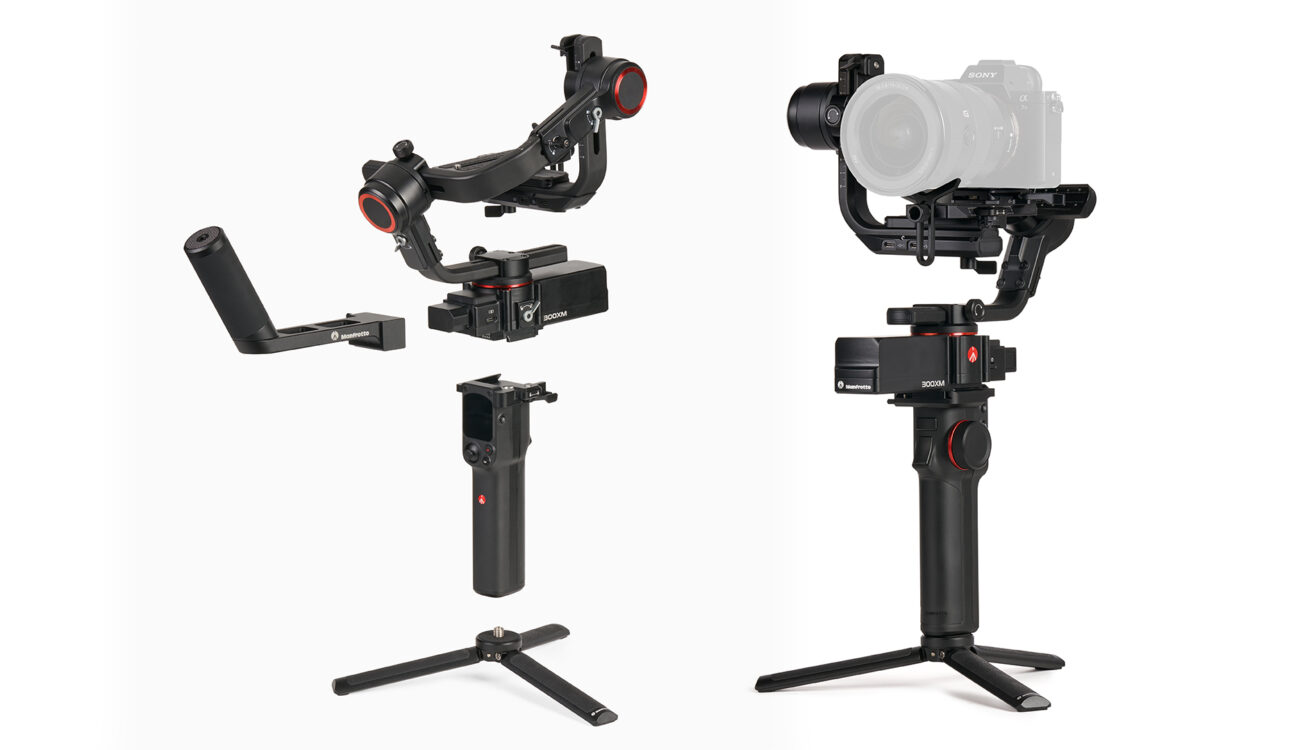 Manfrotto has just introduced a new gimbal in its lineup: the Manfrotto 300XM. This gimbal features a modular design, which means you can use it without the handle or rear handle, which means you can attach the gimbal directly to the end of a boom or mount it to a tripod/slider and use it as a remote head. Let’s take a closer look at this innovative gimbal!

Last year, Italian manufacturer Manfrotto entered a new segment of the camera accessories market by releasing its first lineup of gimbals. The Manfrotto MVG220 and 460 have decent capabilities, but their features and design were not groundbreaking.

The research and development team of Manfrotto went back to the drawing board and decided to take a new approach to camera stabilizers with a modular design leading to the launch of the 300XM gimbal.

According to Manfrotto, the new 300XM gimbal is the “first modular stabilizer that allows users to detach individual parts and re-adapt them to create the best configuration for their needs.” Indeed, the 300XM gimbal consists of four main components:

So, first, let’s start with the gimbal head.

As I mentioned, the gimbal head is powered via a first removable battery at the bottom of the head. Manfrotto claims that this battery can power the gimbal head for up to ten hours. Of course, this design means that you don’t need the removable to use the head.

The Manfrotto 300XM has a maximum payload capacity of 3.3kg/6.6lbs. In addition, according to the company, they upgraded their software and hardware with motion presets and increased operating sensitivity for smoother and better results.

All axis features locks for easy balancing and transport. In addition, the tilt arm can now be extended so larger cameras can be balanced.

On top of the 300XM gimbal head, you’ll find a Manfrotto 501PL quick-release plate. If you want to shoot vertical content, there is even another mounting plate on the vertical axis. Also, there are two USB-C ports to power/control your camera, or Manfrotto’s follow focus via the handle.

At the base of the gimbal head, you’ll find a USB-C port to charge the battery. In addition, there is a built-in Manfrotto 501PL plate to attach the handle or mount the 300XM onto a tripod/slider/boom. If you don’t use Manfrotto 501PL quick-release plates, don’t worry, there is also a 3/8″-16 mounting point.

Next is the removable handle that features a built-in battery, an LCD touchscreen, a joystick, and a multifunctional wheel. This handle can, of course, be attached to the gimbal head so that you can use it as a “traditional” one-handed gimbal. But, if you don’t use it mounted on the gimbal, it doesn’t become useless.

Indeed, the handle communicates wirelessly with the gimbal head, and you can use it – with or without the app – to control the gimbal head functions. For example, with the multifunctional knob, you can set mark points, play with the movement of the axis, or pull focus wirelessly.

Last but not least, the Manfrotto 300XM comes with a removable rear handle and mini tripod. The rear handle is handy in underslung mode as it gives you a second point of contact with your gimbal and increases your footage stability.

What do you think about this new modular design gimbal by Manfrotto? Do you think these modular features would be helpful for you? Don’t hesitate to let us know in the comments down below!