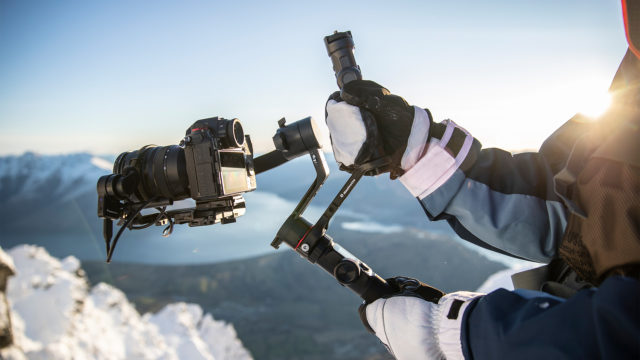 With their differing payloads, dimensions, and specifications, the gimbals target lightweight mirrorless camera operation (with the smaller Gimbal 220) on the one hand and chunky, bulky, and heavier camera setups like DSLRs and Cinema Cameras (with the larger Gimbal 460) on the other hand.

The compact, transportable, and lightweight 51cm (fully closed) GimBoom with Manfrotto’s FAST Twisting Lock technology carries weights of up to 6.5kg when extended to the maximum. Due to its reliance on the typical 1/4″ and 3/8″ top attachment screw, filmmakers may use the new product with gimbals made by other manufacturers such as DJI, Zhiyun, or Gudsen. The extended rod of the GimBoom measures 1.15m while weighing just 800g and is available for order at around $189.

A product like the GimBoom thereby definitely offers movement choices that would have been impracticable with a standard handheld rig. In the past, filmmakers, including myself, have relied on other solutions like adjusted monopods, actual boom poles, or other self-constructed solutions until professional pieces of gear hit the market. A prominent example of this category’s sophisticated products is the Redrock Micro Digiboom, introduced at NAB 2018.

Both gimbals come with a wide range of accessories, which offer users diverse handling options and different types of operations. For example, these include using a detachable arm for shooting from an underslung perspective or attaching a tripod stand for locked, still, timelapse, or remote camera operation. All of the accessories are easily connected and with standard screws, mounts, or cable connections.

Attaching or detaching the camera is possible very conveniently without worrying about re-balancing issues since the gimbals offer Arca Swiss compatibility with a dual quick-release solution.

Independent locking of all the three axes is also a feature of the new Manfrotto gimbals, common in the gimbal market nowadays. This function enables users to change their lenses comfortably and swiftly re-calibrate the gimbal to the modified setup.

Working smoothly and conveniently with gimbals often depends on great operation modes, customizable configurations, and easy choices for different situations. The Manfrotto Gimbal App offers wireless control over the main functionality of the gimbal. Each dial, trigger, and button on the grip and handle seem to be customizable and normal, smooth, and sport modes of the responsiveness may be chosen quickly from the menu. This menu is accessible via LCD touchscreen controls on the handle and grip.

The typical trigger functions of the gimbal are a selfie mode and the vertical operation to create high-grade social media content for platforms like Tik Tok, Instagram, and others. There is also a remotely controllable time-lapse function. The MVG220 also sports the creative inception mode.

Manfrotto also offers a brand new Pro-Kit that features a remote controller and an extra follow focus system. There is a solo mode to control the focus as the gimbal operator or to have a second operator focus and even frame the shots, while the gimbal operator follows the motion. Therefore the handle accessories will work like a remote mimic system, similar to the central functionality of the Freefly Systems MIMIC, the DJI Force Pro, or the Gudsen MOZA Thumb Controller solutions. The remote operator may be up to 50m away when moving the gimbal with the inbuilt gyro.

Is it still a good time to release a new gimbal product into the market? Do you like that they might have learned from previous earlier product releases? What do you think about the GimBoom? What is your take on the modularity and handling options that come with the products? Let us know in the comments below.