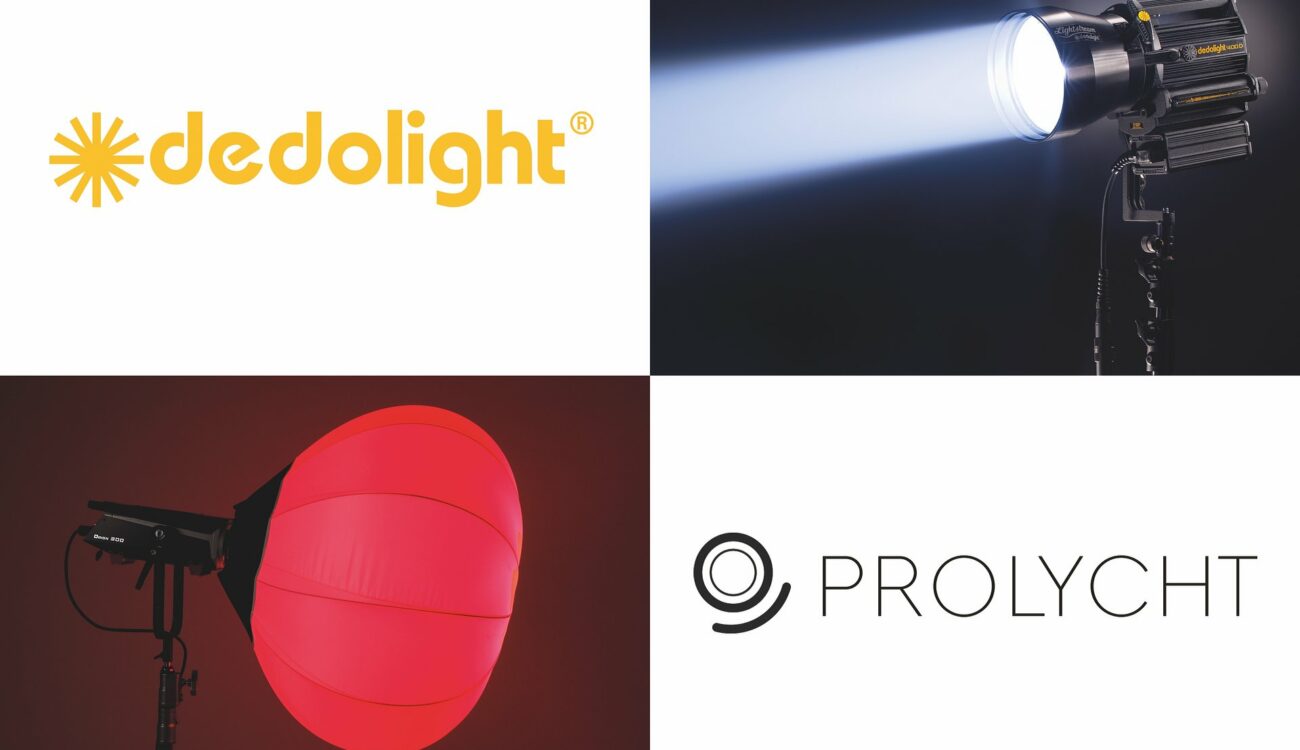 “New kid on the block” Prolycht and lighting manufacturer dedolight announced that they will collaborate on future products and expand Prolycht’s distribution and support in some European countries.

You’ve probably heard of dedolight, the company known for their compact lights with high-quality optics. They’ve been around for over 50 years now with a wide portfolio of products including lighting modifiers, LED fixtures, and big parallel beam lights.

Prolycht on the other hand is quite a new name. They already sold the Thunder Lite and Thunder One LED panels, but the company made headlines at the beginning of this year with their Orion 300 FS COB LED light, which recently got a new firmware update.

In short, it’s a compact LED fixture with a comparable light output to an Aputure 300D, but with RGBACL (Red, Green, Blue, Amber, Cyan & Lime). It offers very wide temperature adjustments between 2,000K-20,000K, HSL, and DMX control. Thanks to their Hyperlight Color Engine they claim to be able to achieve an accurate and wide color spectrum.

What does the Prolycht & dedolight collaboration mean?

Both companies announced now to collaborate on upcoming products and distribution. But what could this mean for the companies, their products, and – in the end – the users?

First of all, dedolight will be the exclusive distribution partner of Prolycht products in Germany, Russia, and the greater Eastern European territory. Dealers and users from Germany and Eastern Europe will be able to purchase Prolycht lights and receive technical advice and support.

Especially the last part is essential in my opinion. As Prolycht is quite a young startup, some hesitated to buy their products due to a lack of local and long-term support. There are – sadly – numerous examples of new and promising products by yet unknown companies which were discontinued shortly after or even the whole company shut down. For electronic products, this means no (official) firmware updates, no spare parts, and in turn a short lifespan.

This move shows that Prolycht could stay around for a while. With a top dog-like dedolight on their side, they don’t seem like a “no-name” brand, which in turn could increase their market share.

Secondly, future products will benefit from the expertise of both companies. While dedolight has some LED products in their lineup, they focused more on the optical designs than on the semiconductors themselves. On the other hand, thanks to their background in LED color science, Prolycht has quite an innovative approach to traditional (LED) lighting.

Combining their technologies together could result in very interesting products.

We have no information on what specifically will be worked on together, but we remain excited.

You can find more information about the Orion 300 FS on dedoweigertfilm.de

What do you think about this collaboration? Would you like to see more collaborations like these across the film tech industry? Let us know in the comments