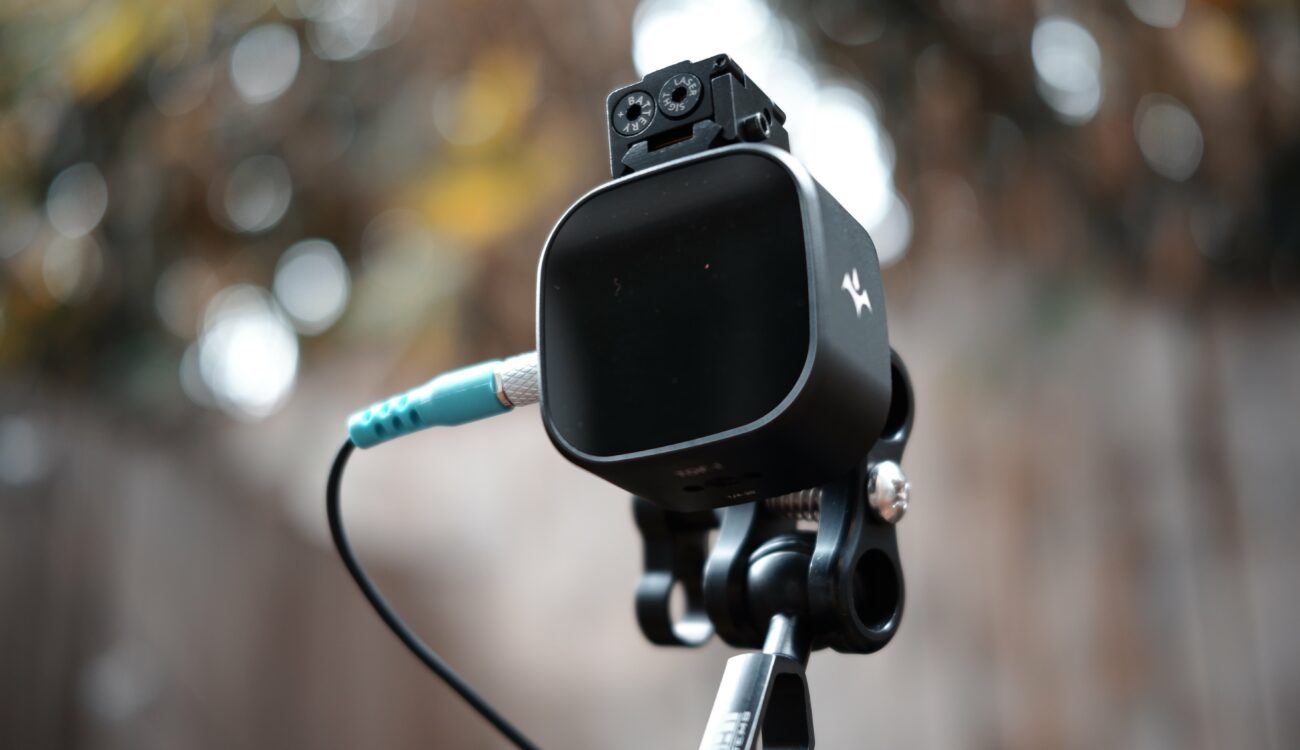 Back in early 2018, Teradek purchased wireless follow focus manufacturer RT Motion and since then we’ve seen a variety of new wireless products appearing under the Teradek RT name. The TOF.1 Rangefinder may not be labeled with the RT moniker, but it too represents a real effort by Teradek and parent company Vitec Group to become a one-stop-shop for all your on-camera wireless accessories.

The TOF.1 Rangefinder integrates with parts of the Teradek RT wireless follow focus system and sends data to your favorite SmallHD monitor (made pre-2015). I recently had a chance to take the TOF.1 Rangefinder out for a spin and what follows is my take on the device. Also, as a cinematographer and producer with great respect for the camera assistants I’ve worked with, I reached out to several union and non-union AC’s for this article to get their thoughts on rangefinder usage in general.

What is a rangefinder?

In a nutshell, the purpose of a rangefinder as it is used in film is to provide distance measurements between the camera focal plane and the subject, and it’s particularly useful for keeping things in focus with manual-focus cine lenses. The camera focal plane is easy to spot – just look for the circle with a line through it. This notation exists on every camera body and has even morphed into nerdy film tattoos and been used in a production company logo or two.

Priced at $3490.00, the TOF.1 Rangefinder is one of the more affordable options for cinema applications on the market. Most of the rangefinders in use on sets today come from smaller and more specialized companies too, which has implications for speedy tech support and servicing. For example, the Cinetape system, common on mid-to-large productions, is priced at around $6500.

Rangefinders, along with a great monitor, are used for pulling focus and are often found as part of a standard AC rental kit. They are also available from larger rental houses servicing long-running shows and commercials. However, not every AC uses a rangefinder. I recently worked on a feature where the AC simply pulled focus by eye from their SmallHD Bolt 703 monitor. Feel free to comment at the bottom of this post if you have a particular take on pulling by eye on a monitor versus using a rangefinder system. Here’s a particularly good article from Evan Luzi with The Black and Blue which covers why pulling focus solely off the monitor is, in his words, “a bad habit”. And here’s another article labeled “Pulling focus off the monitor is OK“. I’ll leave that particular debate to others.

First, you’ll want to consider compatibility. The Teradek TOF.1 Rangefinder works with the Teradek RT MDR.X motor receiver and the CTRL.1 or the CTRL.3 controllers. To Teradek’s credit they are constantly pushing out updates for the RT wireless focus ecosystem, so the software side of things is always improving and evolving.

I own an MDR.X motor receiver and a CTRL.3 with several MOTR.X motors for everyday use alongside my SIGMA Cine Prime set. Everything I talk about in this article is used with this combination of tech as well as a SmallHD Bolt 703 monitor/Bolt 1K XT Transmitter combo. My CTRL.3 controller has lens mapping pre-installed, but CTRL.1 users will need to purchase the lens mapping kit separately, available HERE. Keep in mind the added cost of the lens mapping upgrade if you’re thinking about purchasing a Teradek CTRL.1 RT kit of your own.

Setting up the TOF.1 only takes a few minutes and to help, Teradek has created the excellent setup video available below. Everything is streamlined around a single included right-angled motor cable that sends both power and data to your MDR.X receiver enabling the measurements to head to your monitor.

You’ll want to plug your cable from your TOF.1 into the middle motor port on the MDR.X receiver (pictured below). Also, pay special attention to getting your offset measurement correct or your TOF.1 will display an incorrect distance reading.

I pulled the image below out of the setup video because it illustrates well (by using an Infrared OLPF) how wide a target area the infrared beam is hitting up-to a distance of 80′. The TOF.1 then determines the distance to the target area and registers that distance in red font at a rate of 60 refreshes a second on your SmallHD overlay.

The kit also ships with a simple laser-pointer device that can be mounted directly atop the TOF.1 for getting a better sense of where the rangefinder is hitting (pictured below). Setup of the laser pointer component is simple, but you may need to do a bit of searching when it eventually comes time to replace the internal batteries as they aren’t available in every store.

The laser pointer, in place of an infrared camera, does a good job of making it clear what zone the rangefinder is hitting on your subject or subjects. You won’t want to point the laser at eyes, aircraft, or camera sensors.

Of course, your TOF.1 Rangefinder will only work in conjunction with your favorite OS4 updated SmallHD monitor if your on-camera lens is mapped. Included below is the video link. It’s for the CTRL.1 but the CTRL.3 works the same way. You can either map your lens with your CTRL device or with the Teradek RT app for iOS devices available for download for free HERE.

If in the past, you’ve mapped a lens with other systems, then this part should feel familiar. It took some time to figure out that I needed to have my controller set to IO CONFIG -> SMALLHD to correctly display the overlay. HERE is a handy written guide for the Teradek Motion Overlay that I recommend reading.

The app or the internal CTRL lens map function works similarly and I didn’t find one to be faster over the other. To avoid the two working against one another, you’ll want to make sure you don’t have both your iOS device and the CNRT 1 or 3 on at the same time. It’s also easy to manage and share your previously mapped lenses by either saving locally to your iOS device or to your CTRL 1 or 3. The sharing of previously mapped lenses is a time-saving benefit and this function works very well. You can also save over 200 distinct lens maps — which should be more than enough to cover the more popular options and a few fringe vintage lenses to boot!

Having said that, I found it interesting that the distance marks on the monitor do not then correspond with the lens mapping distance marks you just set with the app or CTRL. Instead, they correspond with your plastic lens ring. With the TOF.1, Teradek includes pre-set and blank lens rings in both imperial and metric. Simply select the one that’s closest to the distances on the side of your lens. Speaking of units – you’ll need to select either metric or imperial on your monitor and on the motor receiver too.

From the limited-by-the-pandemic testing I did with the TOF autofocus, it appears to work well. At some point, it deserves some full-out-on-location testing. This feature, once you’ve mapped it to an assignable key on your controller (discussed at 5:04 and beyond in the first setup video) is interesting, but doesn’t work in all blocking situations given the target size of the infrared beam. For the auto-focus to see much use, the AC will probably find a high comfort level helpful.

To be sure, there are situations where autofocus might come in handy: long backward tracking Steadicam shots with the subject center frame or simple interview setups. However, on multi-cam productions with millions on the line, I wouldn’t want to be the AC should the autofocus momentarily fail. For a complete take on the autofocus, I feel what’s needed is more and varied experimentation. For the time being, I look at the autofocus feature as part of the overall toolset, to be used judiciously, and not something just to be left on.

If you’re already heavily invested in the Teradek RT system (especially the previously mentioned compatible parts of the RT system), then the TOF.1 makes lots of sense. The use of a single motor cable to connect the TOF.1 to your MDR.X (you must use the middle motor port) is so helpful and makes for a streamlined camera build. If you’re on the fence about buying into the Teradek RT system as a whole, then access to a rangefinder like the TOF.1 might be the thing that convinces you. The Teradek RT is starting to feel like a pretty darn complete package and one that’s a bargain compared to systems that can run as much as an additional $10,000.

You’ll find setup to be fast and the workflow can be integrated into your prep day. That’s not to say there isn’t an occasional hiccup. The red chase line on the monitor wasn’t showing up at one point during my testing and it seems from comments from other users that this is a known bug. Power cycling my monitor and my CTRL.3 fixed it. Also, the red range finder measurement can’t be lined up directly next to the lens distance on the monitor — which is something I’d love to see tackled in future updates. In the newest versions of the SmallHD operating system, you can adjust multiple parts of the Teradek RT overlays to your heart’s content. You can see a few of the adjustable aspects on the image to the left. I also did have a moment when the rangefinder stopped showing distance data and the system required a power reset, but in the test environment, I was always messing with a ton of features at once so this was hardly normal on-set usage on my part.

You’ll also want to be sure your monitor of choice is running the latest version of the SmallHD operating system by downloading the firmware HERE. Teradek firmware can be sourced HERE for the RT system, and your CTRL.3 or CTRL.1 and MDR.X will need to be fully updated to play nicely with the TOF.1 (Keeping current with updates is a good practice for most devices).

In short, if you’re an AC invested in the Teradek RT and SmallHD ecosystem, then the TOF.1 will probably feel like a very worthy investment. Any rental house or production company already stocking the compatible elements of the Teradek RT system will also want to consider stocking the TOF.1 rangefinder.

The three higher-end competitors ARRI, Cinetape, and Preston now are jockeying for position in various segments of the wireless focus world. Teradek, with their competitively priced RT ecosystem and the TOF.1, are giving filmmakers more tools to get their project made than ever before. Over the next few years, it will be interesting to see how the field shakes out, but in general, the more competition, the more filmmakers are served.

Free firmware updates are coming on what seems like a daily basis from both SmallHD and Teradek and that more than anything is a sign that both companies are invested in the long term. Continually evolving platforms should also act to raise user confidence.

What has been your experience with the Teradek RT system? Will you be adding the TOF.1 Rangefinder to your kit? On your set do you often use rangefinders? Let us know in the comments below.

Special thanks to Local 600 AC and Cinematographer Tiffany Murray for her assistance with this article. You can follow her on social media HERE and catch her latest work on “Run Your Race” HERE.