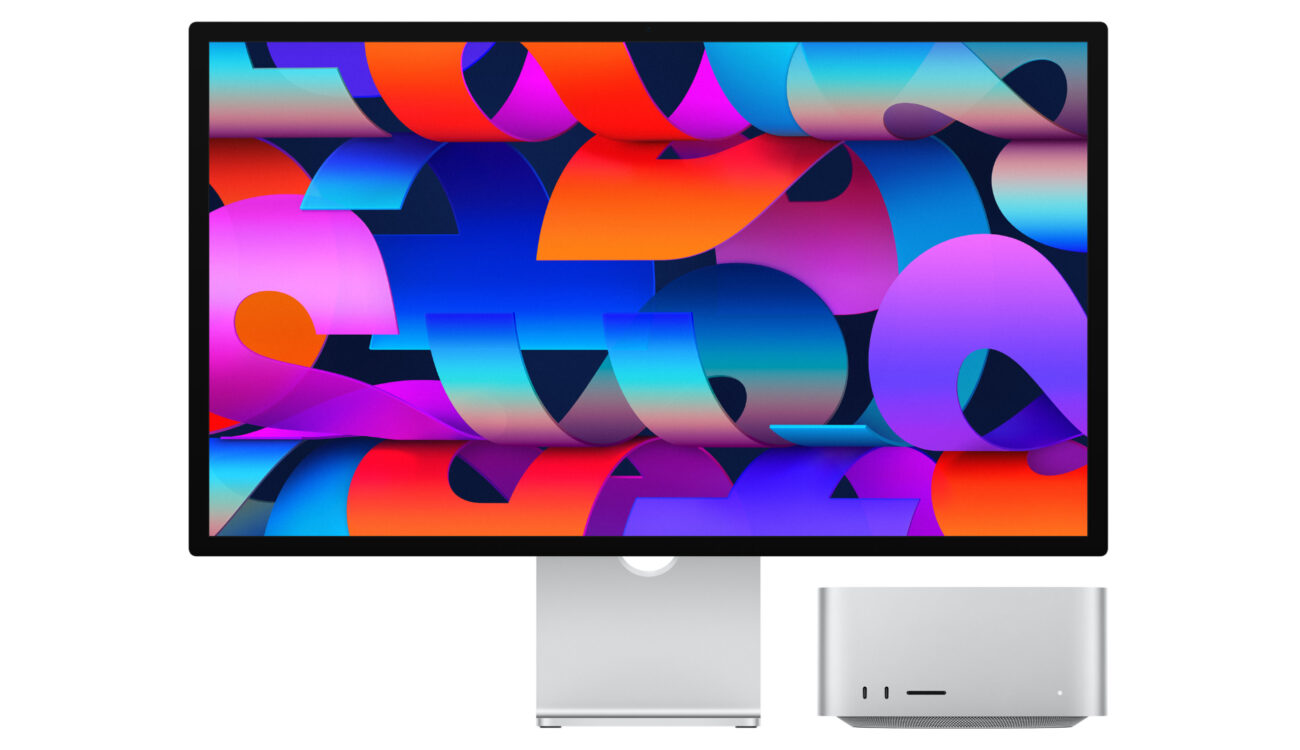 It’s that time of year again – Apple is holding its first big event of 2022 (“Peek performance“), and everyone is sitting on the edge of their seats in anticipation of the latest hardware. So what’s in store for video pros? Well, the brand new Apple Mac Studio is definitely worth a closer look, so let’s do just that!

In 2020, Apple unveiled its own silicon chip design, the Apple M1, which would initiate the transition away from Intel processors in order to gain full control over the highly integrated circuit design of Apple’s upcoming computers. According to Cupertino’s most famous company, this transition should be completed this year, in 2022.

And despite the fact that we haven’t yet seen the highly anticipated Mac Pro M1 (or M2?), what we’re witnessing today is the introduction of a brand-new model that appears to be sandwiched between the aforementioned Mac Pro and the much smaller Mac Mini.
The Apple Mac Studio looks a lot like the Mini, except it’s four times taller and has a newly designed active cooling base.

Obviously, it is powered by Apple silicon in its M1 Max or Ultra variant. Wait, what? M1 Ultra? Well, this so-called M1 Ultra System on a Chip (SoC) has 20 CPU cores (16 high-performance / 4 high-efficiency) in tandem with up to 64 GPU cores.

It is backed by 128 GB of unified RAM, which makes it a pretty powerful system! Actually, the M1 Ultra is two M1 Max connected via an undisclosed (until now) trick, called UltraFusion. This technology provides a really fast interconnect between both M1 Max with up to 2.5 TB/s bandwidth.

And the best thing? To the outside, this combined processor acts like just one, so developers do not have to do any additional programming work to leverage the full power of the system.

The new Max Studio comes in either M1 Max or M1 Ultra base configurations and this has an effect on available I/O as well: the M1 Max variant sports 2 USB-C ports on the front (as well as an SD card reader), the Ultra variant replaces these USB-C ports with Thunderbolt 4 ports.

Turning the Mac Studio around reveals its interfaces with the outside world: Four times Thunderbolt 4, 10Gb Ethernet, two times USB USB-A port, HDMI, 3.5 mm audio I/O and power. Bluetooth 5 and Wi-Fi 6 are of course also on board.

As for pixel pushing, this little Mac Studio can drive up to 4 external monitors like the XDR displays, plus one extra 4K TV.

In terms of raw performance, this little beast seems to be unstoppable: The CPU performance of the Mac Studio with M1 Ultra is, according to Apple, up to 60% faster than the Mac pro with an 28-core Intel Xeon processor and up to 80% faster than the current Mac Pro with the fastest GPU.

The SSD inside the new Mac Studio delivers up to 7.4GB/s and up to 8TB of capacity. When it comes to video performance, the M1 Ultra doesn’t shy away from smoothly playing back 18 streams of 8K ProRes 4:2:2 video in real time… not too shabby, I’d say.

Whether this is the ultimate workhorse for editing, grading and sound design? I don’t know. We’ll have to wait until the first real-world tests start rolling in, but I’m pretty sure this machine is capable of handling huge amounts of effect nodes and all kinds of heavy computational tasks you throw at it.

It’s certainly not the M-fueled Mac Pro in all its glory we are still waiting for, but if the already available Mac Mini isn’t enough and available Intel Mac Pros are too expensive or overkill for the task at hand, this Mac Studio might be the right choice. Apple’s comment on the last non-M Mac, the Mac Pro: “that’s for another day”.

Remember that the system is “bare bone”, which means that you must bring your own monitor(s) / keyboard / mouse. Speaking of monitors, Apple also released a new Studio Display!

Along with the Mac Studio, there is also a new 27″ display from Apple: the so-called Studio Display is capable of 5K (5.120 x 2.880) resolution and is way more affordable than the crazy-expensive 32″ Pro Display XDR 6K from late 2019. This new Studio Display sports 600 nits of brightness (XDR is 1000 nits) and covers the P3 color space.

The new Studio Display comes with an all-screen design, a new 12MP front facing camera and a pretty sophisticated sound system on board, which includes 6 dedicated speakers (four woofers and two tweeters).

The display supports TrueTone, 14.7M pixels in total, and it is also available with a special anti-reflective coating which helps in brighter environments. Also an Apple first: This new display sports an A13 Bionic chip to help with advanced features for the sound and camera system onboard.

The display features one Thunderbolt 4 port on the back which supports up to 96W power to the host computer plus three USB-C ports for other accessories.

Pricing for both the Apple Mac Studio and its companion, the Studio Display, is as follows:

What do you think? Might this new in-between Mac Studio be just what you need? Share your experiences in the comments below!