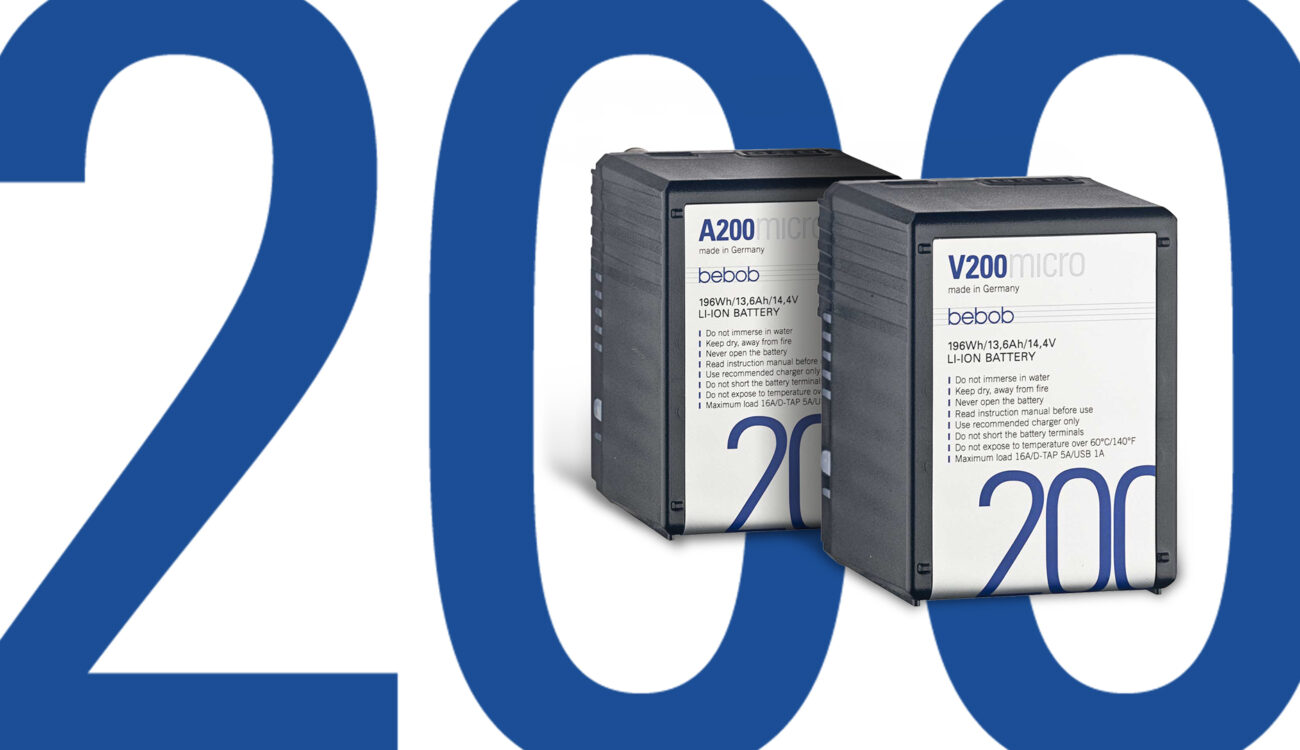 Micro. That little word implies that something is tiny. Or maybe that it’s not on par with a properly sized equivalent. In the case of the new Bebob V200 Micro (V-Mount) and A200 Micro (Gold Mount) both assumptions are wrong. These batteries might be micro in size but they’re definitely not micro in performance. Quite the opposite.

The new Bebob 200 Micro battery series is the company’s fourth one and complements the already available 45Wh, 98Wh, and 150Wh models at the top end with an enormous capacity of 200Wh.

As you can see in the image above, all Bebob Micro batteries feature the same dimensions in terms of height and width. They only differ in depth (and therefore in capacity and weight obviously).

Features of the Bebob 200 Micro Series

All Bebob Micro-labeled batteries offer the same set of features:

Once the battery cells approach their end of life after years of use, you can re-cell them at the Bebob factory. Furthermore, all Bebob Micro batteries are fitted with a “staus alarm” LED which indicates less than 70% total capacity with a yellow light, less than 50% with a red light.

Another handy feature is the built-in LED torch which will shine a light in the dark should you need it. No more searching around dimly lit gear trucks!

The Bebob A200 Micro and V200 Micro also know how to talk to Sony, RED and ARRI cameras in order to display the current voltage right in front of your eyes in the viewfinder of the given camera. The Fuel gauge LEDs will turn blue once the battery senses an attached ARRI/Sony camera, red LEDs indicate a RED camera. In order to manually switch between both modes, just press and hold the “check” button for 5 secs.

Due to the high capacity of the Bebob V200 Micro and A200 Micro batteries, you should keep in mind that you are most likely not allowed to transport these on an airplane, neither as carry-on nor as checked luggage. If you intend to travel a lot, make sure to 1) check with your airline and 2) probably revert back to the 150Wh model since you can declare two of these as spare batteries and transport them as carry-on luggage (depending on your given carrier.. so again, make sure to check).

These new high-capacity models clock in at 445€ each. Bebob also stocks plenty of battery plates, chargers, power bars and some other adapters and accessories. Make sure to check out their website.

I think the recent rise of smaller, yet powerful batteries is a very welcomed addition to the “old-school” bricks which tend to be quite a bit too large for modern indie-cine cameras such as Sony FX-9 or Canon EOS C300 Mark III.

What do you think? Do you own Bebob Micro batteries or other brands? Share your experiences in the comments below!