We take a look at the Cineo MavX, an updated version of the remote phosphor Maverick soft light from Cineo Lighting.

We originally reported on the announcement of the new Cineo MavX in back in February, so we took a moment to visit the Cineo booth at Cine Gear 2017 to take a closer look and find out more.

Traditionally, these kind of lights fixtures work with a layer of phosphor placed in front of a series of LEDs, which colours the light and widens its spectrum. The downside is that different phosphor layers are needed every time you want to change the colour temperature of the light. 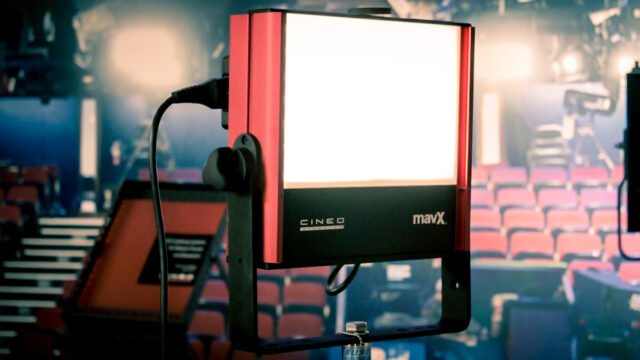 The new Cineo MavX, on the other hand, incorporates a variable color temperature phosphor which you can adjust on the back panel much like with a bi-colour LED. The difference is that bi-colour LEDs rely on dimming between an array of daylight and tungsten-coloured bulbs, whereas the temperature control on the Cineo MavX changes the phosphor layer itself and thus maintains a constant output. The temperature ranges from 2700 to 6500K.

The back panel additionally provides a dimmer for light intensity, as well as DMX connectors to remotely adjust the fixtures in a studio environment.

The body of the fixture features a passive cooling system thanks to large heat sink, meaning that any heat that the light generates can be dispersed silently without any fans.

The Cineo MavX runs on AC power, as well as from a V-Lock or Gold-mount battery. Its relatively small size and light weight make it ideal for more run-and-gun use as well as for the studio.

The Cineo MavX are already available from the Cineo website, and will go for between $2,000-3,000 depending on your setup of choice. For more information on how remote phosphor technology works, make sure to check out Richard’s excellent article HERE.

What’s your experience with remote phosphor LED fixtures? Let us know in the comments!