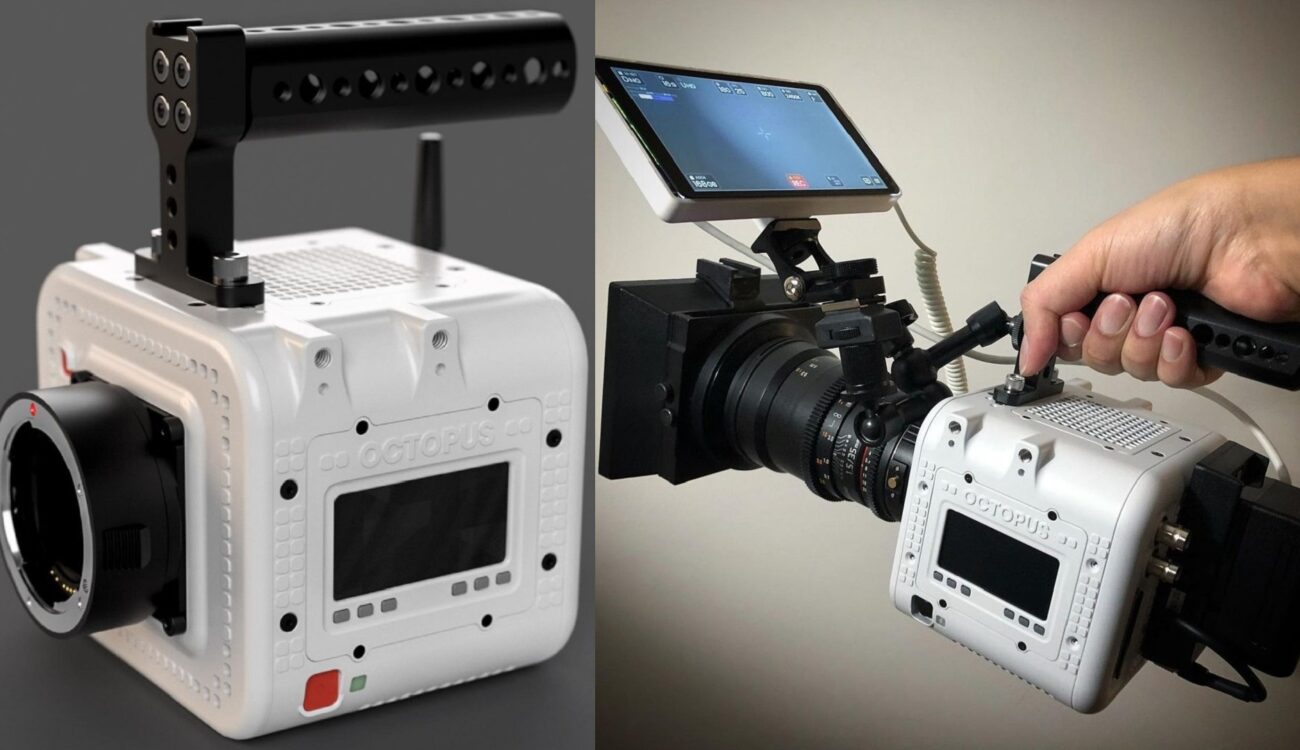 The OCTOPUS CAMERA LF has a finalized body design with SDI output, LEMO power connector, Wi-Fi, USB-C Thunderbolt 3 and HDMI ports. OCTOPUS CINEMA has also upgraded the camera with an 8K global shutter sensor that is larger than full-frame and enables the camera to capture oversampled 4K 14-bit CinemaDNG internally to CFast cards or 8K RAW externally to SSD.

The OCTOPUS CAMERA, a prototype camera developed by the UK-based company OCTOPUS CINEMA, is being designed as an open platform with removable and upgradable parts. The camera body should not be tied to a single image sensor, but should support a range of image sensor modules with various sensor sizes in both monochrome and color versions.

In April 2020, we covered the camera’s development the last time, when OCTOPUS CINEMA shared sample footage from the Micro Four Thirds color sensor version and announced that the camera will support digital audio input over USB. The article can be found here.

Since then, the OCTOPUS CINEMA team shared a finalized design of the OCTOPUS CAMERA LF on their Instagram account. LF as in “Large Format” is the model with a full-frame sensor. In terms of connectivity, the camera will feature an SDI output, LEMO power connector, integrated Wi-Fi, RJ45 LAN connector, USB-C Thunderbolt 3 and HDMI ports. The two latter ports also feature a locking thread to secure the cables in the camera.

Furthermore, the camera body is supposed to have better thermal regulation and multiple 1/4″-20 threads with anti-twist holes. The OCTOPUS CAMERA LF will come with a removable Canon EF lens mount. There should be PL and LPL lens mounts available in the future.

The latest update posted on January 27, 2021, announces that OCTOPUS CINEMA upgraded the OCTOPUS CAMERA LF sensor to an 8K global shutter sensor that is supposedly even larger than full-frame. With a RAW oversampling algorithm, the camera creators were able to record lossless 14-bit 4K CinemaDNG video internally to CFast card. As OCTOPUS CINEMA states, the detail, gradability, and latitude should be better than what other global shutter sensors are capable of.

According to OCTOPUS CINEMA, the camera is also capable to capture full-sensor 8K video in lossless RAW to an external thunderbolt SSD. Sample footage and stills should be coming soon. It is currently unclear whether this 8K version will coexist with the 5K full-frame version or not.

There is still no information about the release date and price of the OCTOPUS CAMERA. Initially, the camera was supposed to be released in the summer of 2020. Whether or not the reason for the delay is the COVID-19 pandemic, is unclear. The OCTOPUS CINEMA webpage currently states that the camera is “coming 2021” without any further specification.

What do you think about the OCTOPUS CAMERA LF? Did you follow its development? What is your price estimate? Let us know in the comment section underneath the article.