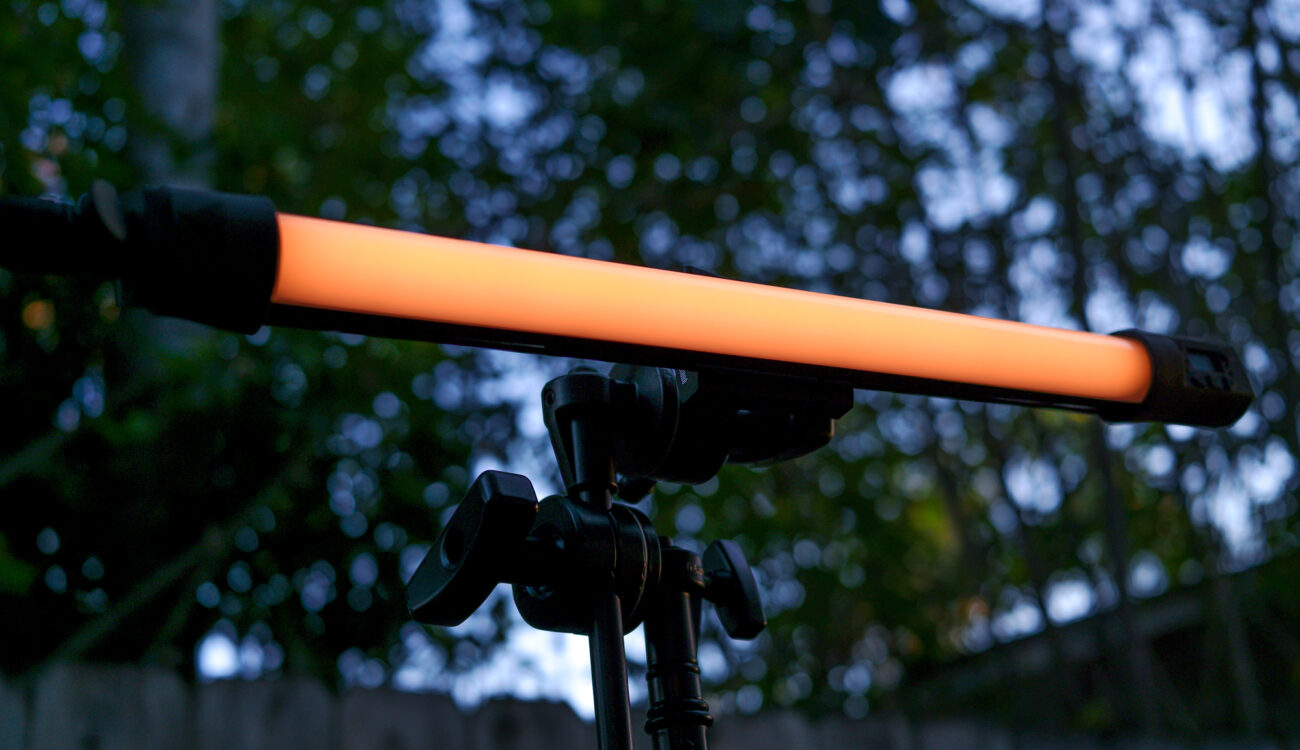 The tube LED light has been a popular form factor for filmmakers for a few years now due to the ease of transport and mounting, the ability to wrap light around a subject, and the simple modular design making it easy to add more tubes for more light. Lighting manufacturer Quasar Science, now a Vitec company, has updated their RGBX Rainbow series with a second generation called the Rainbow 2 and the Double Rainbow.

We’ve known about these fixtures for a while, but they are just now starting to ship widely. We got our hands on a few Rainbow 2s and Double Rainbows, and I am happy to share my thoughts with you!

I’ve been a fan of Quasar Science’s products for years now. Primarily I utilize their T-8 and Crossfade tubes, even adding Quasar tubes in a few Kino Housings. The daylight or tungsten T-8 tubes can be zip-tied or even taped to ceiling tiles to replace ugly overhead office lighting, and their small weight and low power draw make them easy to work with.

Though I’ve never had an opportunity to work with the original Rainbow Fixture, the updated versions – given the connection options on paper and the mounting system – are definitely appealing to me.

The Double Rainbow is available in a 2′ 50W and 4′ 100W version, and I had access to both sizes for this review. Currently, the pricing sits at $1000 for the 2′ and $1,400 for the 4′. These prices place the Double Rainbow fixtures as a premium offering in the LED tube category.

One of the banner features for the Quasar Science Rainbow series is the addition of pixels, with the 4 ft. Double Rainbow containing 48 pixels and the 4 ft. Rainbow 2 containing 24 individually controllable pixels. This is more pixels than the new PavoTube II from Nanlite (which we also reviewed!) or the Astera Titan. As used here, “pixels” are small LED diodes or clusters of diodes that can be controlled independently or programmed as a group. I like using programmable pixels for light engine zone control in process car filming or specific VFX gags

I’ll admit I was skeptical that the overall LED tube exterior design we’ve all become used to needed much tweaking. This is because T-12 or 1.5-inch diameter-sized tubes have become a standard size based on the older fluorescent tubes. Also, there is an entire 3rd party ecosystem of accessories available for T-12 tubes. Because of its non-standard size, the double Rainbow currently doesn’t have a ton of support from 3rd parties. Hopefully, that will change over time!

To me, the exterior look of the Double Rainbow (basically double the width of the Rainbow 2) is lovely, and, story permitting, I’d choose it over a T-12 tube, thereby avoiding the music-video-look cliché.

Taking a 2′ Double Rainbow out of the case, I was immediately impressed by the build quality and connectivity options. USB-C for firmware, Ethernet port for daisy-chaining, and wired or wireless DMX make this fixture very handy for professional shoots or in-studio or on-stage projects where grid access can be tricky. You can use ethernet to pass commands from fixture to fixture, but unfortunately, at this time, you can’t pass through power from fixture to fixture. Quasar Science does make Multibank power adapters, but they are not available in the core kit.

One area that’s still to be fleshed out for both fixtures is Bluetooth app options. I primarily work as a DP and therefore don’t touch DMX. I leave that connectivity to stage board operators or the many capable professional gaffers. However, I have been known to take out my phone or iPad and mess around with a 1st party Bluetooth-based lighting manufacturer app or two. Quasar Science hasn’t released theirs yet (but might quite soon). If Quasar Science can execute on a quality 1st party app, that will increase the value proposition.

The onboard controls on the Double Rainbow series are excellent (see the image above). I prefer them over the Rainbow 2 – likely because there is more real estate to work with on the Double Rainbow. Things got tricky for me when I tried to program different pixels to display different colors by using the menu. This type of work would be faster on an app.

There’s a lot of crossover in the feature set between these two lights, but the most obvious difference is the form factor.

The Rainbow 2, on the outside, feels much like the color-capable tubes that have become more and more popular on sets these days. It’s a familiar form factor, and that’s not bad for the compatibility reasons I mentioned regarding the Double Rainbow. You have several options in terms of length and cost: 2′ 25W ($625), 4′ 50W ($850) and 8′ 100W ($1400). Unlike the Rainbow 2, the Double Rainbow currently doesn’t have an 8′ length.

Twenty pre-built effects are available in both fixtures – these range from Cop Car to Rainbow. The ability to control individual pixels actually gives you more variety and specificity with the effects than what I’ve seen from other manufacturers in this space.

You’ll want to pay careful attention to firmware updates with both types of Rainbow fixtures. As of February 2022, Quasar Science has released five separate firmware updates, including streamlining UI, improving CRMX options, and other quality of life improvements.

You can find firmware updates HERE.

Both Rainbow lights can be wall-powered by a locking 100v-240v AC input or by using an external battery with a 2.1mm x 5.5mm DC barrel 12v-30v input. Quasar Science told me they are shipping all future units with a 3-pin Lemo-based system, which will be a welcomed improvement over a finicky barrel connector.

One of the key differences between the Rainbow 2 and Double Rainbow fixtures compared with the Astera Titan series is the lack of a built-in internal battery for power. I admit I swing back and forth on the pros and cons of having an internal battery in a lighting fixture versus allowing for external power only. At the moment, I’ve landed on a popular saying in the cinema gear world: different tools for different jobs.

In the documentary world, you can move a hair faster using fixtures with internal batteries. Still, the addition of external batteries really gives you more flexibility in a scripted cinema environment. A quick battery change on a process car and you are back up and running without the need to swap the entire fixture, which may have other modifiers on it, and be chained in a hard-to-reach spot for safety.

The Ossium Mounting System deserves its own section because it is just so gosh darn handy. At its core, the Ossium system feels very much like a standard NATO rail that you’d find on most camera rigs, and it’s equally as helpful. There’s so much to love here. Multiple safety points in the form of locking press pins keep a tube from slipping to the ground, and the Ossium baby pin even has a little cap at the end you must unscrew to remove it from a gobo C-Stand grip head.

Beyond the baby pin, there’s an Ossium rotator and V-mount battery plate, and even a magnetic mount. Gone are the days of going to Home Depot and grabbing a bunch of screws to try to mount a tube in a given spot. Both Rainbow 2 and Double Rainbow also have many 1/4 20 mounting points. All of this means no more gaff taping LED tubes to the ceiling!

The Ossium system also helps to make both Rainbow fixtures conveniently modular. Quasar Science is also planning to release a “framed array” that will let you attach up to 12 lamps to a yoke system, helpful for huge key lights or nighttime scenes, or general space lighting. I feel as if this upcoming frame and the accessories are only the tip of the iceberg in terms of what’s possible, and I’d like to see a few other manufacturers like DoPChoice or Chimera think about embracing the Ossium system (patents allowing) with some additional accessories.

I grabbed a few measurements on my Sekonic C-700U Spectrometer (now updated with the C-800U) to see how accurately the Rainbow 2 Q25 handled color temp (kelvin) and output (lx) from a distance of 3 ft. Here are my readings with a target of 5600K and output set to 100%. I had no accessories attached for any of these readings.

Let’s take a look at all four illuminance [lx] readings when targeting 5600K. It makes sense that [lx] readings are roughly doubled across the board when comparing the Rainbow 2 to the Double Rainbow. What’s interesting to me is that the RR100 is actually significantly brighter at 1300 [lx].

If you are only considering a dollars- to-[lx] ratio when thinking about your purchase decision, in my opinion, the way to go is the RR100.

The Ossium mounting system is a breath of fresh air in a tube-lighting segment that has notoriously finicky mounting options.

The output and kelvin readings for the Rainbow and Double Rainbow fixtures are uniformly excellent. We don’t have a 1st party Bluetooth app yet, and with luck, that will come soon. Still, the ability to control either Rainbow light over wireless or wired DMX without an additional accessory is useful.

Overall, I’m impressed by both the Rainbow 2 and the Double Rainbow, and I’m hopeful that the list of accessories will continue to expand from Quasar Science and other 3rd parties. Two thumbs up.

What do you think? Will you be adding the Rainbow 2 or Double Rainbow to your kit? Let us know in the comments below!