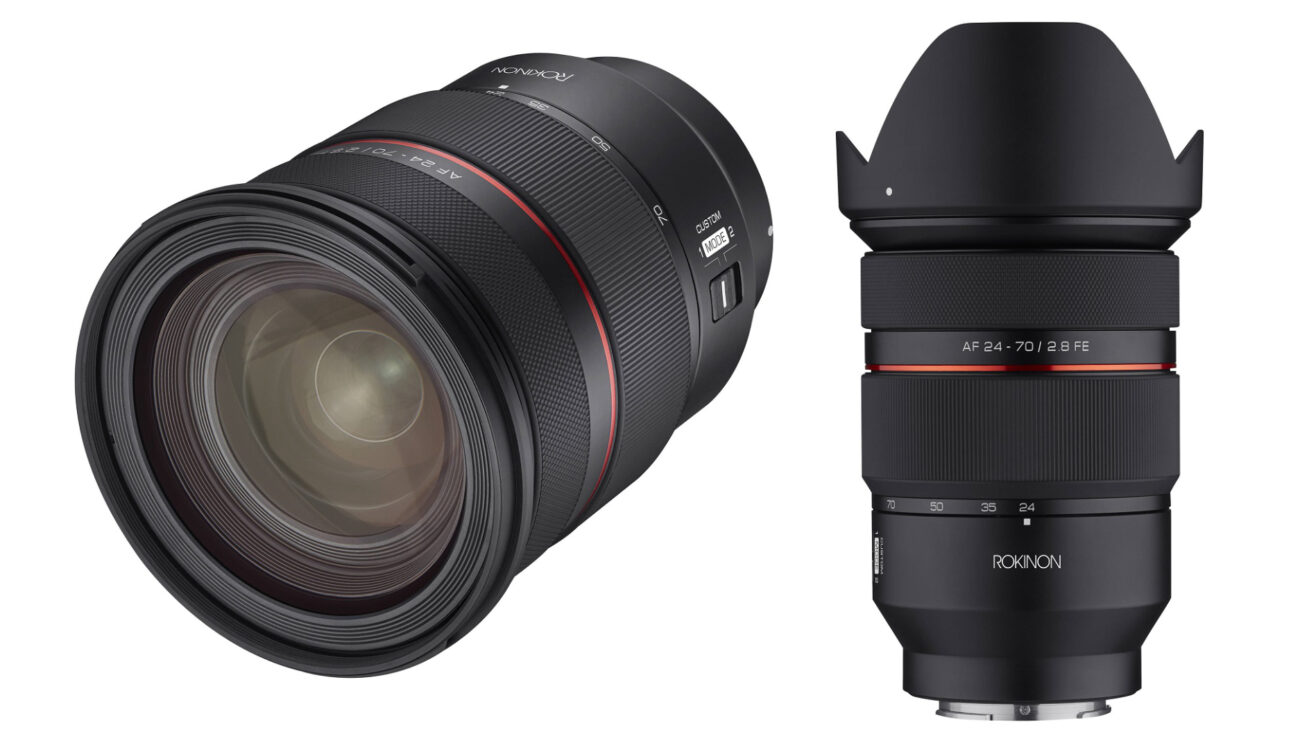 Samyang (Rokinon) AF 24-70mm F2.8 FE is a new autofocus zoom lens for Sony mirrorless full-frame cameras that is optimized for video by being parfocal and having a linear focus ring. The lens has an 82mm front filter thread, a linear STM motor for a fast and accurate AF, and a minimum focusing distance of 0.35m (1.15ft). The lens is available for pre-order for $999.

A lens with 24-70mm focal length (or its equivalent on smaller or larger sensors than full-frame) is usually considered a must-have allrounder. I think it really is the most useful universal zoom lens to have. When it comes to Sony E-mount cameras, up until now there have basically been two 24-70mm options on the market – one from Sony and one from SIGMA.

Just a quick reminder in case you did not know this – Samyang sells its lenses under the Rokinon brand in some countries such as the USA. Therefore, Rokinon and Samyang are the same products. Samyang claims that the new AF 24-70mm has been optimized for video as well as photography applications.

Firstly, the lens should be parfocal (the focus distance does not change when zooming) which is a very useful feature for video. Secondly, the seamless focus control ring features a linear MF which allows the focus to change linearly in response to focus ring rotation. This helps for manual focusing and it is essential if you want to use a follow focus with the lens. Additionally, according to Samyang, the focus speed is smoothly controlled when shooting video in autofocus mode.

The standard 24-70mm range for full-frame sensors on this lens is accompanied by a 9-blade diaphragm with a circular aperture available between f/2.8 and f/22. According to Samyang, the lens produces a natural-looking bokeh and a starburst effect. When it comes to optical design, the Samyang AF 24-70mm f/2.8 FE lens comprises 17 elements in 14 groups (2 ASP, 1 H-ASP, 3 HR, and 3 ED). The minimum focusing distance is 0.35m (1.15ft).

According to the company, the lens’ autofocus is not only accurate and quick but also quiet and smooth. The AF 24-70mm FE lens features a linear STM (Stepping Motor) that can control the larger and heavier focus lens group quietly and precisely.

This Samyang’s first zoom lens features weather-sealing on 7 spots to protect from light dust, rain, and snow. It has an 82mm front filter thread, the weight is 1,027 g (36.2 oz), and the length is 128.5 mm (5.1″) Last but not least, the lens features a custom switch that can have various functions such as Aperture Control Mode or MF Mode with more features coming with a future firmware update.

The company will also be offering a Samyang Cine Kit consisting of a focus gear ring, follow focus, and tripod mount. The company says the kit is designed to use without a camera cage as it already has its own baseplate with 15mm rods. Currently, there is no additional information about the Cine Kit nor its price and availability.

Do you have a 24-70mm f/2.8 lens in your kit? Do you have experience with Samyang/Rokinon AF lenses? Let us know in the comments section underneath the article.