The conveniently-named Sony E PZ 18-110mm F/4 G OSS lens has been on our radar ever since it was announced in September, as it is one of the only lenses of its kind made for large sensor video cameras. In my Sony 18-110mm review, I will be looking at all the benefits and limitations of this lens. See the video review summary above, or read on for the details. 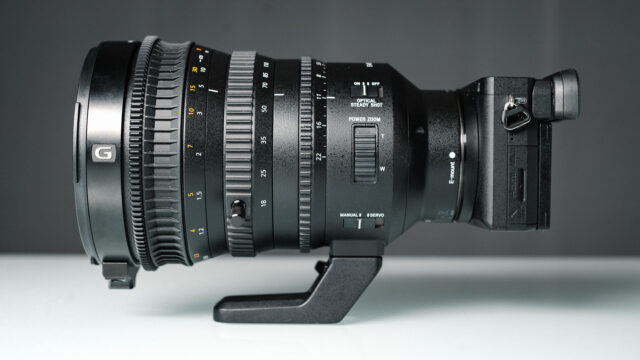 When looking at the new Sony E PZ 18-110mm F/4 G OSS, it makes sense to first look at its predecessor, the FE PZ 28-135mm F/4 G OSS (Review HERE). Back when Sony introduced their first lens in this series, it was the only “affordable” video lens made for large-sensor cameras with video functionality. Unfortunately, some aspects about it were not ideal: while it gave us a great focal range on full-frame cameras like the Sony a7S and Sony a7S II, the field of view was too narrow on crop sensor cameras (super35) like the Sony FS7, which it actually shipped with as a combo package. Also, the electronic zoom functionality was a big downside for many.

Fast forward to 2016 when Sony introduced the E PZ 18-110 F/4 G OSS, the subject of this 18-110mm review. Tailored to super35, it introduced a manual zoom functionality alongside several other improvements. Now this lens is finally on my desk and, even though the Sony FS7 is out for a shoot, I have no reservations to slap it onto our  Sony a6500 to take it for a spin. 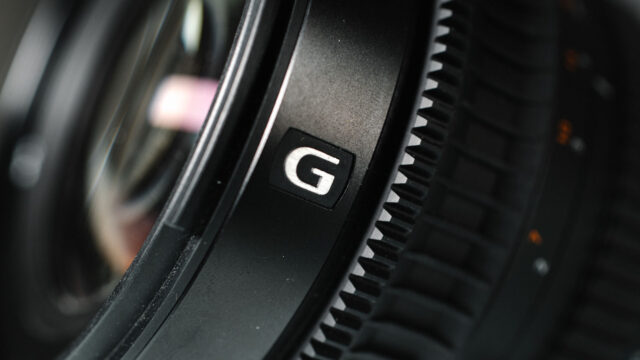 As mentioned in the 18-110mm review video (see above), we took this lens to Las Vegas for our NAB coverage and used it to shoot some of our videos. I’ve spent a number of days with it, and by now I can safely say that I really liked working with it and look forward to using it more. Not only is it easy to handle and favours most of my shooting needs, but when viewing the footage I found that the 4K image this lens delivers is really outstanding.

As seen in my a6300 vs a7S II test (same sensor and image quality as a6500) the image quality of this little camera is impressive, so it was the right choice for my Sony 18-110mm Review. 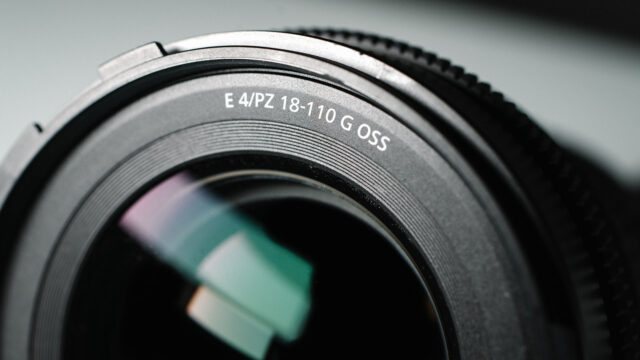 Sony’s integrated lens compensation functionality really gave the full-frame Sony FE PZ 28-135mm F/4 G an edge over other lenses in my review, as its communication with the camera means the lens’ defects are immediately corrected in-camera. The same is true for the new Sony E PZ 18-110mm F/4 G OSS, which delivered quite clear and undistorted 4K footage, even at F/4.

Here’s a screenshot of the lens at 18mm and F/4 and with lens compensation disabled: 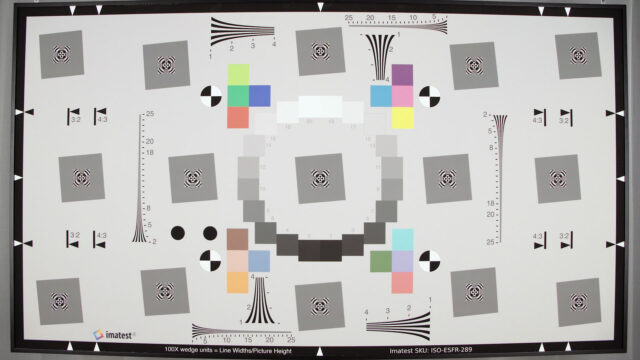 Even at the small web resolution of the image above, we can already spot some chromatic aberration and pronounced distortion. It seemed to me like 18mm is really where the lens performs at its worst. Unfortunately, I didn’t have a chance to take a second shot of the chart with lens compensation enabled. Judging from my experience shooting outdoors though, I believe that most defects completely disappear with Sony’s digital correction.

Here are two stills of my outdoor shot with lens compensation on and off: 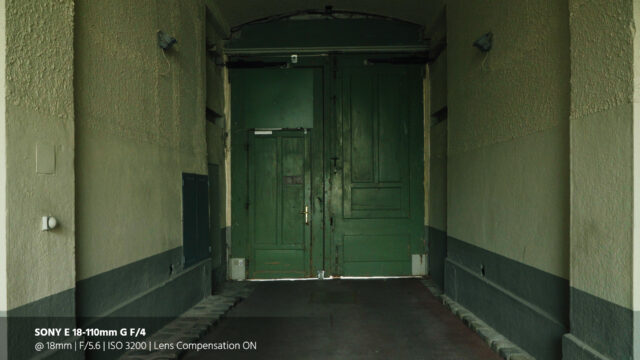 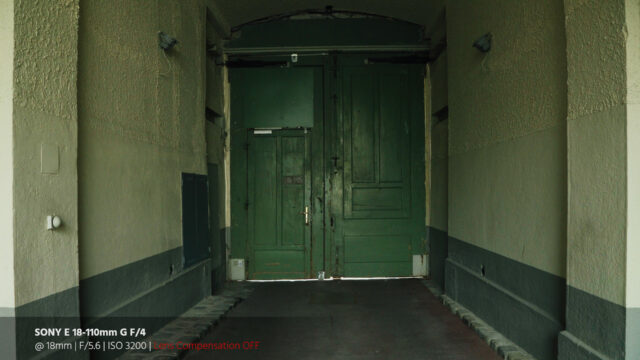 In terms of build quality, the Sony E PZ 18-110mm F/4 G OSS seems quite robust. While I don’t think that it is made of metal, it has a compact, self-contained design that has weather sealing and appears reliable.

The lens construction allows you to zoom in and out without a shift in focus point – an essential benefit over many photo lenses. In my video review I say it’s “parfocal”, but I was told the lens only achieves the stable focus via electronic servos, so in all technical correctness, “parfocal” is the wrong term.

On top of that, the design of the internal mechanism of the lens minimises focus breathing, focus shifting, and other anomalies that would otherwise be noticeable when adjusting the lens during recording. 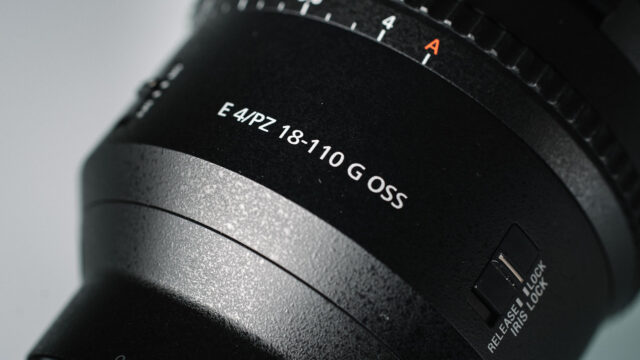 In terms of optical quality, Sony really takes a completely opposite approach to other high-end cine glass manufacturers. While cine glass is made to optical perfection in manual mode, Sony’s design is based on all sorts of digital science and electronics to counteract optical flaws. Deciding which approach is the “the right one” might be debatable – I can see how cine glass fans despise the digital methods of improving a lens. At the end of the (shooting) day, though, I think many people will simply appreciate the quality they see on the screen. After all, analogue is on its way out, isn’t it?

In my 18-110mm review video I mention the manual zoom functionality – a great improvement that works very well. What is also new is the option to reverse the zoom not only electronically, but also mechanically. I was very surprised to see this. If you’re used to rotating your zoom in a particular direction, and irritated when using lenses that zoom the opposite way, then this feature is for you. 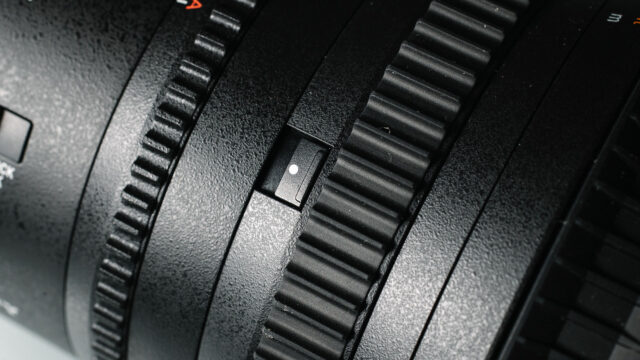 The electronic servo zoom is nice to have, but to be honest, it is not smooth enough – the flimsy built-in rocker didn’t let me achieve a single zoom I felt was usable. While it may work for fast-paced news stuff, if you want to make sure that the viewer forgets the camera then you may need to look at a different zooming option. 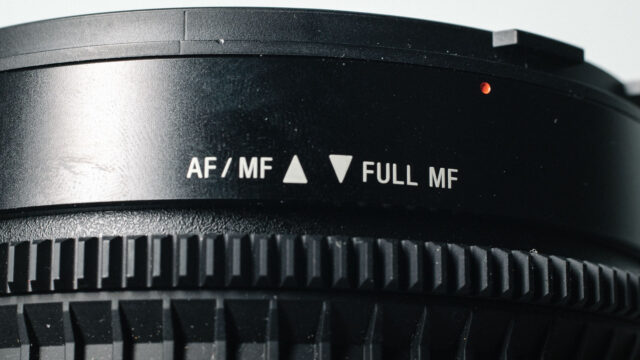 Move the focusing ring to switch between autofocus and manual focus

The lens has built in autofocus and also gives you the option to switch to manual focusing, just as with the previous lens model. The focus ring itself has built-in cinema-standard gearing (MOD 0.8) for follow-focus tools, which is new in this lens and frankly an essential attribute if you want to call your lens “cine”. 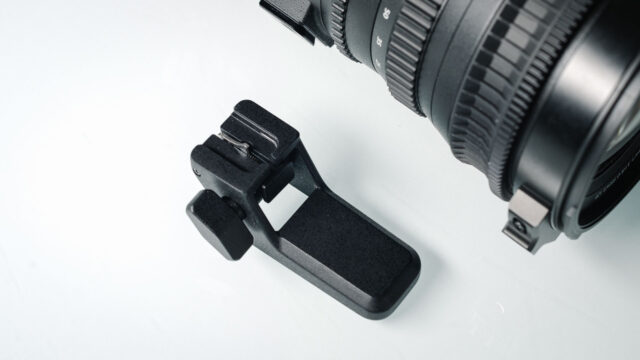 Underneath the lens is a new detachable quick release tripod mount which is a much better solution than that on the 28-135. The front of the lens features a cine lens support – needed when the lens is used with follow focus accessories. 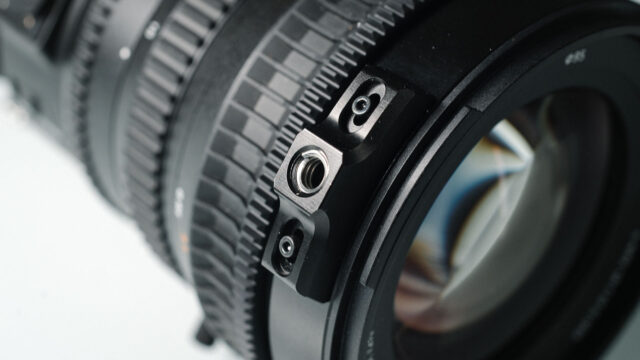 The lens also comes with a front cap (an accessory that was lacking in the 28-135) as well as a sun hood that I did not use during my review. [UPDATE: I was informed that the compatibility to teleconverters was cancelled by Sony shortly before sales started.]

Unfortunately, I found the lens’ minimum focusing distance of 0.95m (37.4″) very inconvenient. I wish Sony had improved this point over their first G lens, but it was not the case. There is one way to achieve a slightly closer minimum focusing distance: switching to autofocus when close focusing at the wide end. Sony made sure this information is cryptographically secured on the front of the lens, where it says: “0.40m/1.31ft-0.95m/3.21ft”. 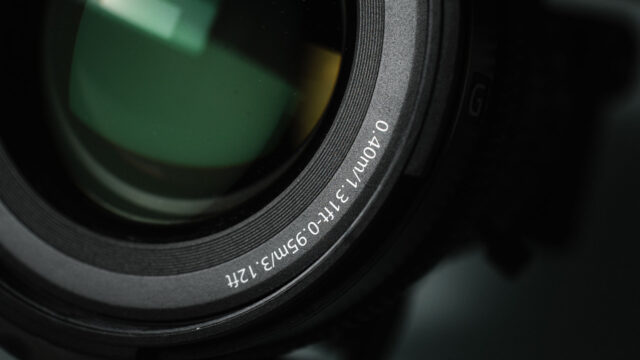 Whether you’re working in video, cinema or something in-between (as most people do nowadays), I think this lens is really worth a close look. There’s currently no other lens that compares to it in terms of versatility, price and physical design. Furthermore, I found the optical quality achieved in tandem with Sony’s internal electronic solutions and automatic lens compensation to be really impressive. Even though you could simply adapt a lens like Canon’s 18-80mm, or use an entirely manual lens like the Fujinon 18-55mm, the Sony E PZ 18-110mm F/4 G OSS will probably always give you better quality, simply because it is built for their own cameras with the digital in-camera improvements.

That said, both the close focusing limit as well as the flimsy electronic servo zoom functionality could still be improved to make this lens perfect. Maybe in the future Sony will overhaul this lens one more time. Until then, I believe that this lens is one-of-a-kind in terms of versatility and could find its way into many shooters’ standard video and cinema kits. It will certainly work for me on many shoots. 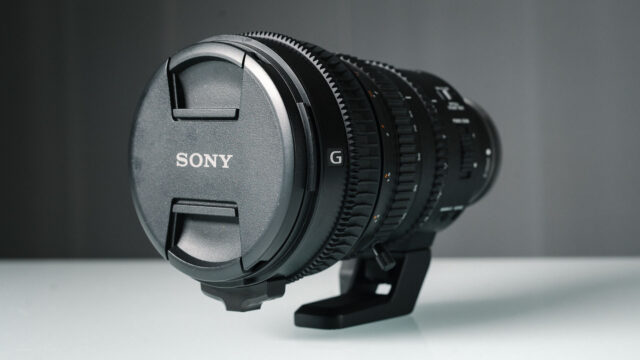 I hope you liked my Sony 18-110mm Review and that it was helpful to you. If you have any questions or thoughts please let me know in the comments.

The Gear I Used

Because so many people ask which equipment we use and why, I’ll take this opportunity to share my gear list. Another reason is that I really enjoyed working with this small package of great gear, which for me is the best affordable way to shoot high quality 4K right now:

I didn’t use the cage when working with audio on this camera because we had a wired XLR microphone for our NAB coverage and went with the Sony XLR-K2M instead. During the yard shoot, I simply took the lens with the camera, the SmallHD FOCUS monitor and a tripod.