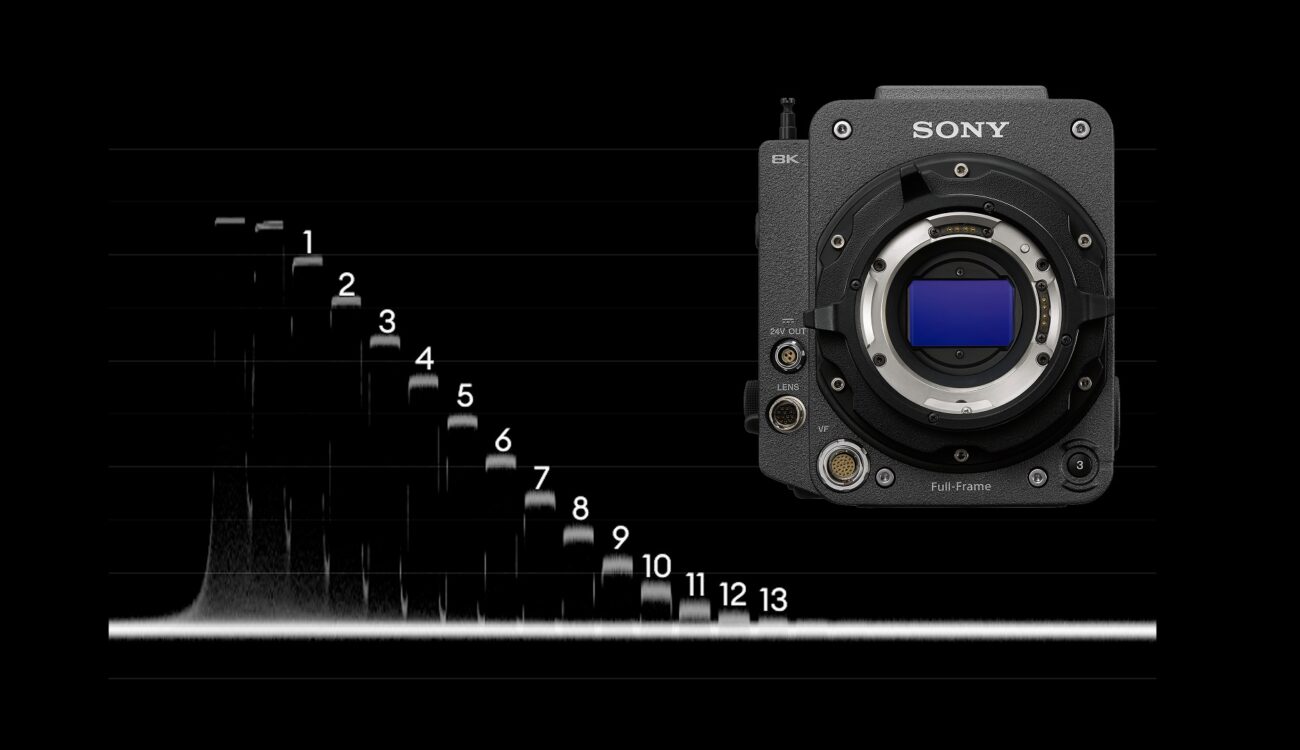 The new Sony VENICE 2 with the 8.6K sensor was in the CineD headquarters for a quick visit – so we jumped on the chance to run it through our lab test procedures. Curious how it fared? Then keep on reading!

It always feels special to me when a “real” cinema camera arrives for me to run it through a lab test – there is always the hope that a new benchmark is set for our lab test results, as the last time this happened was with the ARRI ALEXA Mini LF and Classic (in case you missed it, you can read about it here). So I was super curious what Sony have up their sleeves with the new VENICE 2 cinema camera.

Before we start, a big “thank you” goes to my dear CineD colleague Florian Milz who helped me with shooting this lab test!

Well, first big positive surprise: in full-frame 8.2K mode our standard procedure to test the rolling shutter reaches its limits because the rolling shutter is so low: we use a 300Hz strobe light which generates patterns of pairs of black and white lines. Each pair represents 3.3ms. With the Sony VENICE 2, the readout speed of the sensor is so fast that we were not able to confidently identify one full pair.

Hence, for the first time, we are giving you an approximate result: the readout speed is about or slightly below 3ms (lower is better)! This is the fasted readout speed for a full-frame camera that we have measured so far! Wow – here you go, a new benchmark!

Curious to find out more about how we test the dynamic range of cameras? Have a look here.

Let’s start first with the new internal X-OCN format. Very little technical information can be found online about it, but in DaVinci Resolve 17.4.6 (build 4) all typical “RAW” controls are available, showing the file as “Sony RAW”. Hence, I developed the X-OCN XT files with SGamut3.Cine / SLog3 settings in Full Res – Sony:

The Sony VENICE 2 features a dual native ISO sensor, the two base sensitivities are ISO800 and ISO3200.

Above the blue “12.9” line in the middle graph above, another 2 if not 3 stops are identified inside the noise floor. Let’s see if those are usable later on in the latitude section.

The VENICE 2 also features internally downsampled 4K ProRes HQ recording – a very attractive alternative for faster turnarounds in a well-established ProRes pipeline. And here, the results out of the box are even better, due to a proper downscaling from an 8.2K portion of the sensor, but some internal noise reduction seems to happen as well. More on that further below.

Using SGamut3.Cine and Slog 3, the following waveform plot is obtained:

Quite surprisingly, the code value distribution changes. SLog3 usually clips around the code value of 896 (or luma value of 87). In the waveform plot above the signal clips around 960 code value (or 94 luma value). Also, the noise floor sits at a lower code value. We are reaching out to Sony with this question and will update the article accordingly at a later stage. EDIT: see my explanation below what is happening here.

Those are superb results, the second-highest values ever measured in the lab! The kings of dynamic range are however still the ARRI ALEXA cameras, with the ALEXA Mini LF coming in at 13.5 stops at SNR = 2 and 14.7 stops at SNR = 1 (Lab test here)

One final note to ProRes HQ – I don’t know if it is a DaVinci Resolve or Sony issue, but there are no Metadata visible in Resolve. For X-OCN though all metadata are shown correctly.

EDIT: as a reader pointed out, the missing metadata probably also causes the data levels issue I pointed out above – data levels are not correctly identified by DaVinci Resolve. If I manually adjust it to “Full” then data levels are displayed correctly for ProRes HQ. As a quick check I also ran those corrected files again through IMATEST, nothing changes, we get the same results (as it should be). We reached out again to Sony to make sure that in a future firmware update the ProRes Metadata header is identfied correctly in Resolve.

Latitude is the capability of a camera to retain details and colors when over-or underexposed and pushed back to base exposure. Some time ago, we have chosen an arbitrary value of around 60% luma value (in the waveform) for our subjects’ forehead in our standard studio scene. This CineD base exposure should help our readers to get a reference point for all the cameras tested, regardless of how they distribute the code values and which LOG mode is used.

For the Sony VENICE 2, we put the base exposure a tad below 60% in the luma waveform to allow overexposure of up to 4 stops. Again for X-OCN XT, we developed the files using SGamut3.Cine and Slog3 in the DaVinci Resolve “Camera RAW” tab. Also, we used the official Sony SLOG3-S-GAMUT3.Cine TO S709 V200.CUBE LUT to bring the image into the REC.709 space (can be downloaded for the VENICE 2 here). Out of the box, the image looks superb – I added a tiny bit of saturation, however.

Looking at 4 stops of overexposure, and bringing back the image to base exposure we get the following image:

The red channel (on the ungraded shot) on Johnnie’s forehead is close to clipping, but still intact – as it should be.

From here on we underexpose the shots by closing the iris of the lens in one-stop increments until T8.0, and then we are further halving the shutter angle successively.

At 3 stops below base exposure, things are getting interesting, as already quite some noise shows up in the image:

Nothing dramatic, so let’s move on to 4 stops below base, brought back:

Now, heavy noise is affecting the image. Also, nasty speckles of chroma noise (green and red) are all over the image. Using heavy spatial and temporal noise reduction in DaVinci Resolve, we can save the image but at the expense of green and pink chroma noise – see below:

The image turns greenish, and we are getting larger areas of greenish and pinkish blotches hovering around the image, which I find rather distracting in a moving image. But I would say, still useable.

Let’s have a look at 5 stops under base, pushed back:

The image shows a very strong green cast, and noise is getting atrocious. Game over? Indeed, game over. Have a look at my attempt to use noise reduction below:

As soon as I increase the chroma noise slider in the Spatial Threshold section the image turns brown. Using the Luma slider just turns the image into a plasticky, soft mess. Hence I completely avoided that.

Game over. Hence, the Sony VENICE 2 8.6K in X-OCN XT shows 8 stops of latitude. For comparison, the ARRI ALEXA Mini LF has 2 stops more latitude (see the test here), one more in the highlights, and one more in the shadows (5 over and 5 under).

On a side note, I tried various ways in Resolve to see if I could squeeze out better results:

Now I was curious if ProRes HQ would behave in a better way. For 4K ProRes HQ, I was getting this image at 4 stops under:

Rather similar, but less noisy. Hence, I tried again noise reduction on the 5 stops below base image:

The static image looks quite okay, but unfortunately in the moving image there are still those blotches of pink and green chroma noise but to a less obvious extent – I do find them very distracting but depending on the individual taste you could argue that we see 9 stops of latitude.

So all in all, in 4K ProRes HQ you do get better results – probably due to the internal costumed sensor-specific fine-tuned noise reduction.

I would really ask you to compare the Sony VENICE 2 latitude results to the ARRI ALEXA Mini LF latitude results here. Not only does the ALEXA Mini LF have a full stop and more latitude in the highlights, but it is also eye-opening to see how good the underexposed Mini LF images still look compared to the Sony VENICE 2, even without noise reduction. Sony has those large nasty patches of chroma noise in the shadows, whereas the Mini LF has a very fine grain.

The Sony VENICE 2 sets a new benchmark for rolling shutter: less than 3ms for a full-frame 8.6K sensor – Wow! In the dynamic range department, things get a bit more complicated. In Sony RAW, X-OCN XT the images are quite noisy – leading to quite average dynamic range results of 11.7 stops at SNR = 2.

In downsampled internal 4K ProRes HQ, we get the third-best results ever measured, 13.2 stops at SNR = 2. Obviously, Sony is applying some customized internal noise reduction here.

In the latitude section, between 8 (Sony RAW – X-OCN) and 9 stops (4K ProRes HQ) are obtained. Unfortunately, excavating information from the noise floor is not as straightforward because nasty chroma noise is destructing the image. Even with advanced noise processing in DaVinci Resolve the limits in the latitude section are reached quite early. 8 stops (for Sony RAW) is actually along the lines of full-frame consumer cameras like the Panasonic SH1, or Sony A1 that also have 8 stops of latitude in our standard CineD studio scene. The ARRI ALEXA Mini LF stays the leader of the pack with 10 stops of exposure latitude, no matter if filmed in ARRIRAW or ProRes.

What do you think of this Sony VENICE 2 lab test? Do you already use this new camera? If yes, please share your experience in the comments section below!