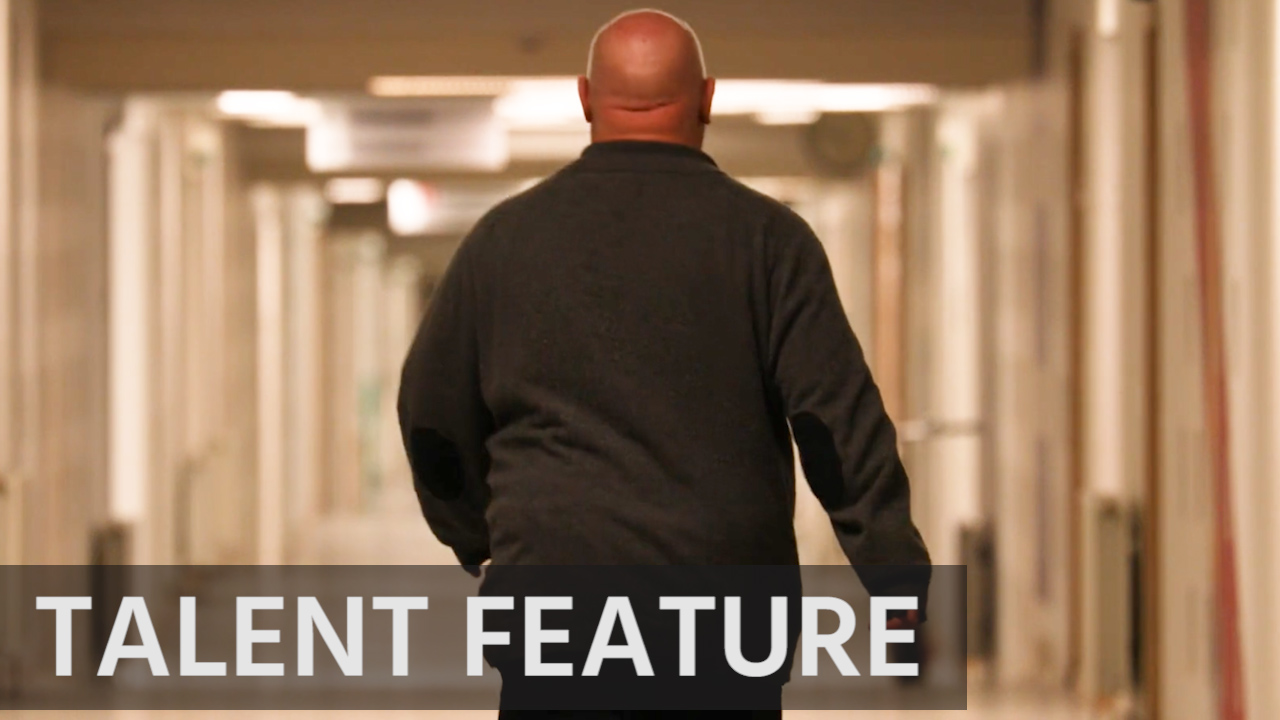 My name is Malcolm Brabant. I don’t like to talk about my age. But let’s put it this way, my next birthday song was written by the Beatles and includes the lines, ‘When I get older, losing my hair, many years from now.’ How the hell did that happen? I am probably the oldest stringer in town, although I only string for one outlet these days, America’s PBS Newshour. I’m their one man band in Europe. I’m a generalist, so I’ll do anything from the refugee crisis, to terrorism, to the Swedes deciding God is gender neutral. In my view, I’ve got the best job in the world, at a time when many of my contemporaries are being elbowed out the door, or pushing up the daisies. The Newshour is a bulwark in the battle to preserve accurate, balanced, nuanced, long form journalism. In my spare time, my driving passion is my first feature length documentary, Malcolm is a Little Unwell, which is probably the most unique film about insanity you’ll ever see. But it’s also a cautionary tale about what can happen to freelancers. Most importantly, it’s available on most download sites. So get your credit card out.

Currently based in: A retirement complex in Britain’s Thames Valley.

How did you get started in our industry? I’ve been broadcasting for more than forty years. I started as a reporter in local radio in East Anglia. I moved to London when I was 22. My first big break was commentating live at the Iranian Embassy siege in London when the SAS blew the windows off and went in over the balcony. I moved into regional TV. I did it all the hard way. And the big mistake was leaving London. Once you hit the capital. Don’t leave. It took years for me to get back. I spent 30 years as a BBC foreign correspondent, based twice in Greece. I used Athens as a springboard to cover the Middle East and the Balkans. I covered the siege of Sarajevo from start to finish as a radio reporter. But the big change in the way I became a journalist came when I moved to Miami in 1996 and the first digital cameras came on the market. I realised it was the way forward. I taught myself to shoot and edit. And I’ve been doing it ever since. I’ve had filming assignments in over 80 countries. I think it’s made me a much better journalist, because when it comes to TV if you don’t have the pictures, you don’t have the story. You have to be there and that’s the key. I’ve been the PBS Newshour’s point man in Europe for the past three and a half years. How did I get there? Well I went mad. To get the full story. Pay to watch my documentary. You’ll be gobsmacked.

Current assignments: I shoot reports of about 9 minutes duration for the Newshour. I won a Peabody Award in 2016 for leading the Newshour’s coverage on the refugee crisis. For the uninitiated, that’s America’s top broadcast journalism prize.  The last story I did was about the pros and cons of microchipping humans. I’m just finishing off a film about the impact of the Novichok attack in Salisbury. And I’m hoping my foreign editor is going to green light a film about Syrian refugees adapting an Ancient Greek anti war play. We’re talking about doing a series on Europe in crisis. Otherwise, I’m just waiting for the next gig. 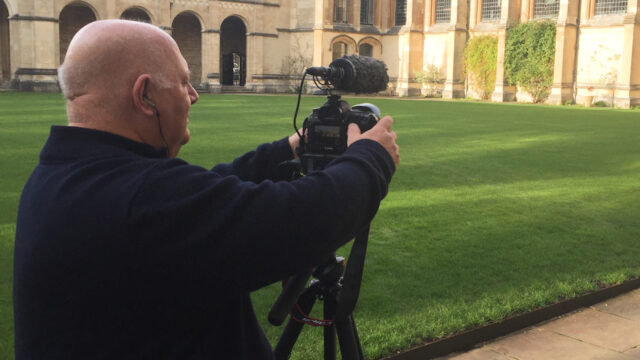 What types of productions do you mostly shoot? I basically do films that put a human face on geo politics. And occasionally, I get to do something daft or poignant. I did a quirky film in 2017 about a dying language in Greece involving people who whistle to each other. And I was fortunate enough to do a piece about my great grandfather’s involvement in WW1 to coincide with the 100th anniversary of the end of the conflict. I come at this gig primarily as a veteran reporter. I know which elements I need to make a story work for our show…and then I ensure I get the right images and characters.

What is your dream assignment / job in our industry, and what are you really passionate about? I’d like to shoot an entire doc for the Frontline strand on PBS. There’s a part of me that would like to see how I’d get on shooting a war. But I’m too fat to run away, and I’d not only jeopardise myself but also those around me. My son is on a song writing course. And I’d like to shoot his pop videos that make him a fortune, because he’s my pension.

In the work that you are presenting us, now that it is done, what would you have done differently throughout the production?  In my day job, I’d like to get more movement into some of my sequences. But I don’t have the gear I need. I’d like to have a smaller camera with in built stabilisation. Next camera will possibly be a Canon EOS R. Small is good. I’m tempted to buy the Osmo Pocket for sneaky stuff. As far as the documentary is concerned, I’d have liked to have had some money. It was done with absolutely no budget. 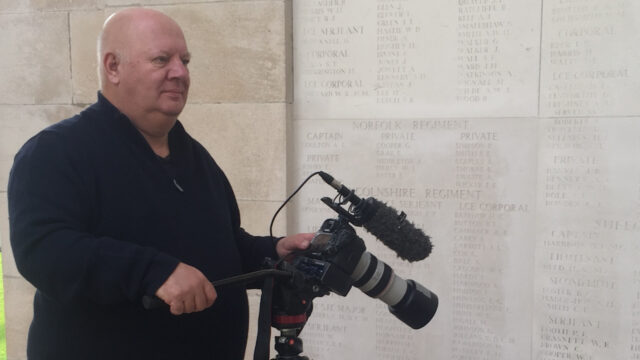 I have a Sony radio mic kit, which I rarely use. A great Rode N4 shotgun mic and a Beachtek DSLR Ultra box to pump the sound back into the camera. I also have a DJI Osmo.

You chose to shoot your project with the Canon 5D Mark IV.  What was your workflow, were you happy with the results and will you ever go that way again? What’s my workflow? What does that even mean? It’s chaos most of the time, but eventually it comes together…Seriously speaking, Malcolm is a Little Unwell has taken eight years to come to fruition. We’ve only decided to release it now because the footage of my insanity can no longer harm me and damage my reputation. I went mad after I had a routine yellow fever vaccine in 2011. My wife started filming me with an iPod when my behaviour started changing. She wanted to record it to show the vaccine company to try to explain what was going wrong. Later, I filmed myself with my then main camera a Canon 7D ….because I thought I was the Messiah and that the Second coming had to be on television. I spent the best part of 15 months in locked up psychiatric wards. I left hospital in July 2012 and have never been back. I was given the complete all clear in Jan 2014.

It was in 2013 when we realised we had the basis for a documentary, because I was writing the book about our nightmare and we were relying on the footage to jog my memory. But I didn’t start shooting stuff to expand the film out until 2016 because I was too busy trying to get back on my feet and restore my professional reputation.

The editing process has taken eighteen months. There have probably been about 20 or 25 different cuts until we got it right.

And now, it’s pretty tight. Whether it’ll make any money is uncertain. But everyone who’s seen it has been blown away. Just check out those five star reviews! 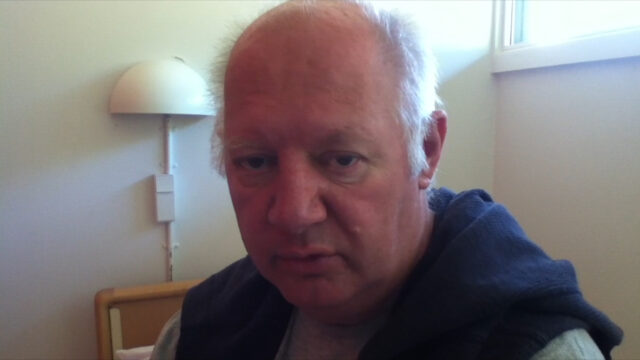 Malcolm at the hospital

What’s your favorite light equipment and why did you choose that kit over other solutions? I have some pieces of glass that are connected to wire and bulbs in my armoury, but mainly my favourite lighting equipment is the sun. And I wish the electrician would stop turning it off early. When he does, I tried to use what’s on the wall or in the ceiling.

Do you use drones or gimbals in your productions? If so, what is the most effective way you’ve found to deploy them? I like using a DJI Osmo on a bicycle. I did have a DJI Spark. But I got distracted when I was flying it out of the window of our fifth floor apartment in Copenhagen to try to get a shot of my son playing the guitar in his bedroom. Luckily no Danes were killed after Droney MacDroneFace clipped the roof. The most effective way for me to use a drone is to employ a proper pilot.

What editing systems do you use? Final Cut Pro X. Love magnets.

How much of your work do you shoot in Log and what is your preferred way of colour correcting? Log? Are you shitting me? I have enough trouble remembering to push the record button.

How frequently do you travel, and do you have any tips when it comes to packing your gear? I travel as often as President Trump doesn’t tweet. So not a lot at the moment. Don’t ask me about packing. My cable discipline is non existent. But I have a great Manfrotto backpack which takes all my gear. And that’s the key. Travelling light. It’s essential for old pros. 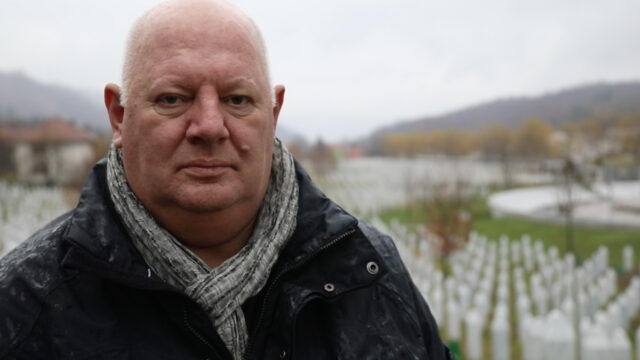 Malcolm Brabant has been in the broadcast business for more than forty years. He is a self taught shoot and edit professional who is currently acting as a Special Correspondent for America’s PBS Newshour. He had filming assignments in over 80 countries and he tries in his films to put a human face on geo politics