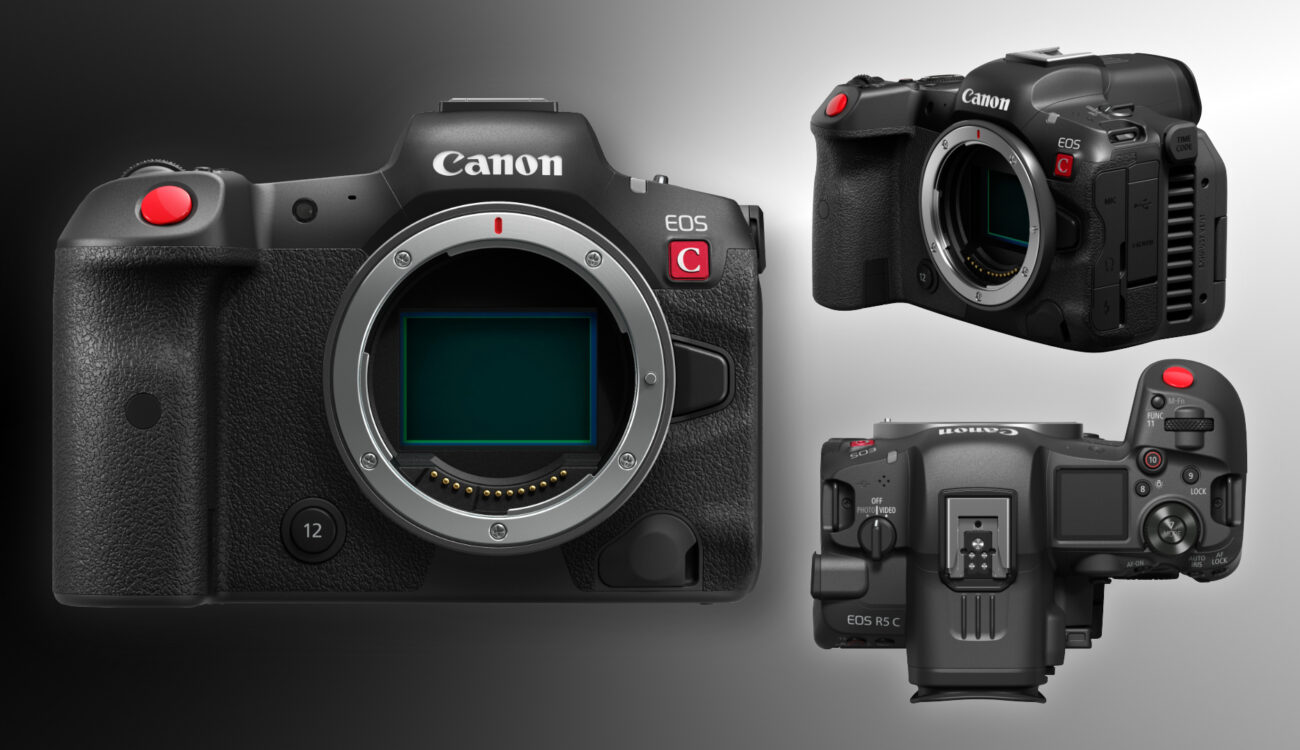 Canon has just announced the latest (and smallest) addition to its prestigious Cinema EOS line: The Canon EOS R5 C is the cinematic sibling of the existing R5 with advanced features geared toward filmmakers rather than photographers. In addition to this major product release, Canon has also announced the availability of new firmware for the EOS C70 that enables a host of new and improved features.

Please also give Johnnie’s short first-look review of this new offering from Canon a read here!

Don’t get me wrong, the Canon EOS R5 C is still a hybrid mirrorless camera designed to please both filmmakers and photographers. This makes the new R5 C the only member of the “Next Gen” Cinema EOS line that isn’t a pure filmmaking tool (I’ve excluded the 2012 EOS 1D C from this, as it’s a bit outdated now).

What’s probably one of the biggest distinctions between this and the original EOS R5, you ask? Well, the new R5 C sports active cooling for longer recording times, so no more overheating, and, three new Cinema Camera RAW Light recording modes. With the inherited 8K recording capabilities of the R5, this release marks Canon’s first 8K Cinema EOS camera.

First off, here’s a quote from Canon’s official press release:

Underpinned by a high-resolution, full frame CMOS sensor, DIGIC X processor and the RF Mount, these three elements enable high fidelity 8K capture, and 45 megapixel still photo capture at burst speeds up to 20 frames per second, all in a single body.

So yes, this is still a hybrid camera but it leans way more towards filmmakers. As such, it features impressive specs such as internal 8K 30p RAW recording (up to 60p when using an external power source).

That power source can either be a wall adapter with a dummy battery or, much more versatile in my book, a power bank (or wall adapter) with USB-C Power Delivery. But keep in mind that not every power bank is rated sufficiently to enable the 8K 60p feature. Power Delivery is a must-have feature for the power bank being used here. A battery grip attached to the R5 C and fed by Canon batteries is not certified as an external power source in this regard.

The body looks a lot bulkier than the EOS R5 and that’s due to the added internal cooling system. According to Canon and thanks to that very system, the limitation of the recording time no longer depends on heat, but only on the capacity of the memory card and the battery – even when recording in 8K.

The EOS R5 C supports HDR via PQ and HLG, as well as Canon’s own Log 3 gamma, so filmmakers can capture a wide dynamic range to further fine-tune the footage in downstream post-production. Furthermore, the engineers have once more implemented their Dual Pixel CMOS AF system.

The R5 C of course offers both Eye AF and EOS iTR AF X, which tracks people’s eyes in real-time and can follow their heads as they look away from the camera. Working in combination with the Optical IS with compatible lenses, the camera features electronic (not IBIS) image stabilization with coordinated control that mitigates the effects of shaking when shooting hand-held.

Two card slots – a CFexpress 2.0 Type B and UHS-II SD card slot – allow for simultaneous recording options where different formats, resolutions, and bit depths can be recorded to each card at the same time for flexible workflow options.

Another, sometimes very useful, detail is the enabled audio recording at 4K 120p. In addition, the EOS R5 C supports anamorphic de-squeeze options, true 24p shooting and you can choose shutter angle instead of fractions of a second. This is very handy when changing the frame rate frequently.

From the press release again:

Of course, this new EOS R5 C sports Canon’s RF mount as well as a multi-function accessory hot shoe (same as in the EOS R3), so you can easily connect handy third-party accessories such as the TASCAM CA-XLR2d adapter (article here). Furthermore, the R5 C, just like the C70 sport dedicated Timecode I/O.

As a (very) nice touch, Canon has completely separated the menus for stills and for video – so you get an EOS R menu when taking stills, and the familiar Cinema EOS menu when shooting video. This a much needed and very welcomed feature, I think everybody will agree here!

To implement this, the EOS R5 C offers a new 3-position power dial, so you can switch seamlessly between stills and video modes.

The new Canon EOS R5 C offers 13 assignable buttons as well as a 0.5-inch OLED VF with 5.76 million dots. If glancing at a proper LCD is more your thing, the R5 C sports a 3.2-inch HD LCD touch screen. The screen can be tilted and swiveled, so vlogging shouldn’t be a problem.

Although being a bit on the bulky side, the whole unit weighs a mere 680g (without cards and battery) – the C70 weighs 1170g. But still, the body is made of durable magnesium, and of course, it is dust and weather-resistant.

Unfortunately, the R5 C still only offers a micro-HDMI port, but – and this is perhaps on the plus side – Canon includes a dedicated port protector that can be used to clamp onto both USB-C and HDMI cables.

Enough talk, here comes the detailed spec sheet you’ve been waiting for, as it makes it much easier to grasp all the different modes, frame rates, crop factors, and, yes, possibilities of this little beast of a camera:

Along with Cinema RAW Light, there are three more codec options available with the R5 C: XF-AVC, HEVC (using an mp4 container) as well as XF-AVC, and h.264 (again, in an MP4 container) proxy recording.

One thing to remember: Any format above the 650Mb/s mark requires a fast CFexpress card rather than an SD card for internal recording.

What the new Canon R5 C does not offer are internal ND filters as well as professional (XLR) audio inputs. The latter can be resolved by using the aforementioned TASCAM CA-XLR2d adapter, but the former can’t be addressed as easily. So the bigger brother of the R5 C, the EOS C70, remains the smallest Cinema EOS camera with internal ND’s.

A 3.5 mm TRS stereo mic/line input and a 3.5 mm headphone output are of course provided on the camera body itself.

Also, as mentioned earlier, the HDMI port is still implemented in its micro variant and not as a full-sized port. SDI ports are also missing, of course, but that’s a feature for higher-end (and larger) cameras and that’s fine.

Still, this new offering from Canon can certainly be seen as a major leap in terms of expanding the Cinema EOS line to appeal to more budget-minded users who may not need all the bells and whistles of the more expensive Cinema EOS offerings.

What do you think? Could this be your next camera? Share your experiences with other Canon mirrorless cameras in the comments below!