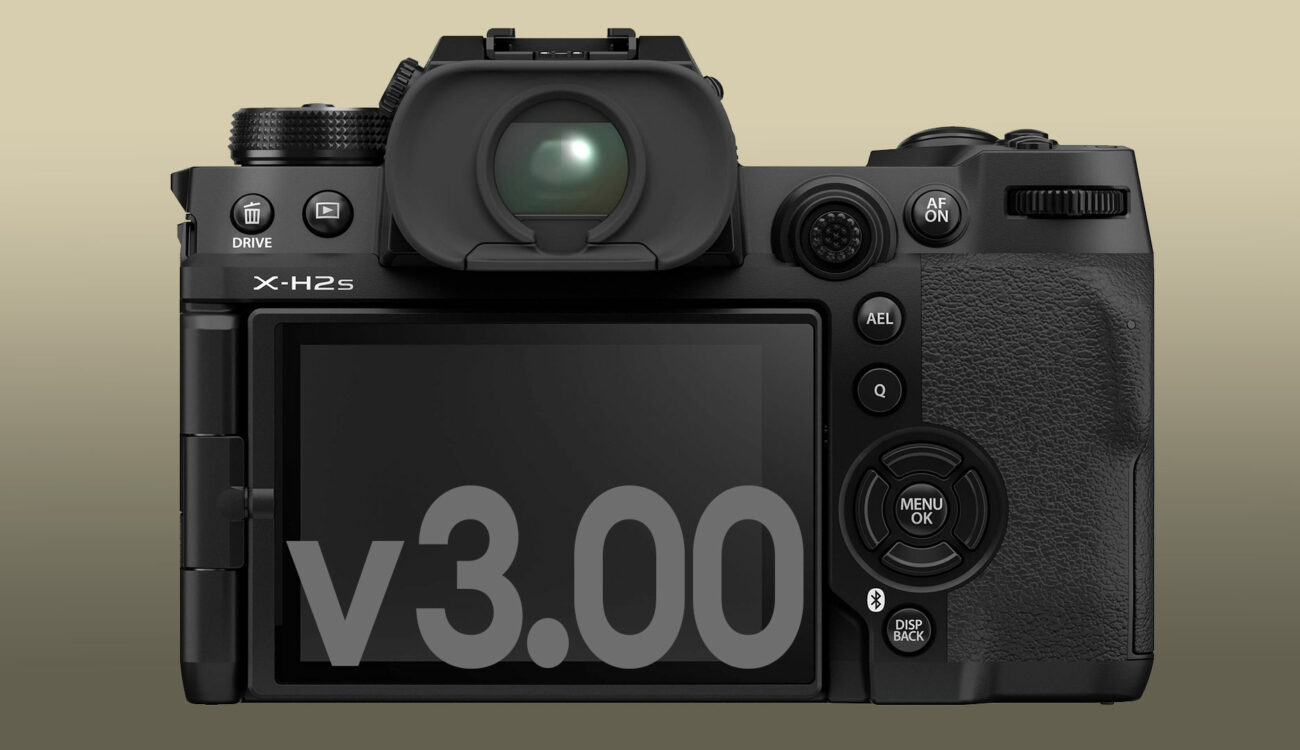 The new firmware v3.00 for the FUJIFILM X-H2S brings improvements for the autofocus system – subject detection and tracking – as well as other features and support for FT-XH and TG-BT1 grips (along with the X-H2). The FUJIFILM XC 15-45mm power zoom lens also got updated to work with the TG-BT1 grip.

Released last year in May, the FUJIFILM X-H2S is the company’s flagship X-mount mirrorless body for filmmakers. In fact, the camera (and its exclusive accessories) offers so many interesting specs and features for filmmakers that we covered it in multiple articles already:

Even though in the end our “camera of the year 2022 award” went to the more affordable higher resolution FUJIFILM X-H2, the X-H2S remains a very interesting choice for many filmmakers who can appreciate a higher frame rate at 4K resolution, 3:2 open-gate recording, and, better rolling shutter performance, etc.

Recently, FUJIFILM further improved the X-H2S with a free firmware update to version v3.00. Let’s take a look at what is new with this firmware update.

The new firmware v3.00 for the X-H2S mostly focuses on the enhancement of autofocus. The AF system got better subject detection and dynamic tracking performance. FUJIFILM even made a video highlighting the new improvements.

Furthermore, there are other enhancements regarding the TG-BT1 and FT-XH grips and further menu optimizations as well as bug fixes. Here is the full list of the new features and improvements in the v3.00 firmware from FUJIFILM:

Subject detection performance has been improved in situations that were difficult to detect with the current firmware, such as “backlighting”, “looking sideways”, and “small subjects”. The subject detection function can now be used in a better way in any scene.

New subject categories added – “Insect” and “Drone” detection. Those are available In addition to the existing “Face”, “Eyes”, “Animal”, “Bird”, “Automobile”, Motorcycle & Bike”, “Airplane” and “Train”. Insects can be detected by setting the subject as “Bird” and drones can be done by setting it as “Airplane”.

The motion prediction algorithm has been improved to enable stable tracking of subjects moving at high speed in the frame.

The AF focusing speed has been improved when continuous shooting is started by simultaneously pressing the AF-ON button and the release button while the camera is out of focus. The AF starts to focus faster than before, even when filming situation like sports.

When the camera and TG-BT1 are connected via Bluetooth, you can shoot photos and movies while holding the grip, as well as using the “electronic zoom in” function with the following lenses:

“Bluetooth DEVICE LIST” has been added in the “Bluetooth/SMARTPHONE SETTING” in the “NETWORK/USB SETTING” menu.

A frimware bug has been fixed, which caused the freezing that occurs before and after AF is performed. Other minor bugs have been fixed.

All the information about the firmware and tips on how to update the firmware can be found on the FUJIFILM support website.

FUJIFILM also released an update for the newer X-H2 model. Unfortunately, there is no comprehensive autofocus update but other than that, it got similar improvements as the X-H2S (please refer to the X-H2S update section for more details):

Last but not least, FUJIFILM also released a firmware update for the wide-angle power zoom lens, the XC 15-45mm. With the new firmware v1.10, the zooming of the lens can be controlled with T/W button on the TG-BT1 battery grip.

The FT-XH firmware update improves the live view frame rate from camera to terminal when connected to the X-H2S or X-H2.

Do you use the FUJIFILM X-H2S for your work? How do you like the camera and its autofocus system so far? What do you think about the new firmware v3.00? Let us know your thoughts in the comments section underneath the article.