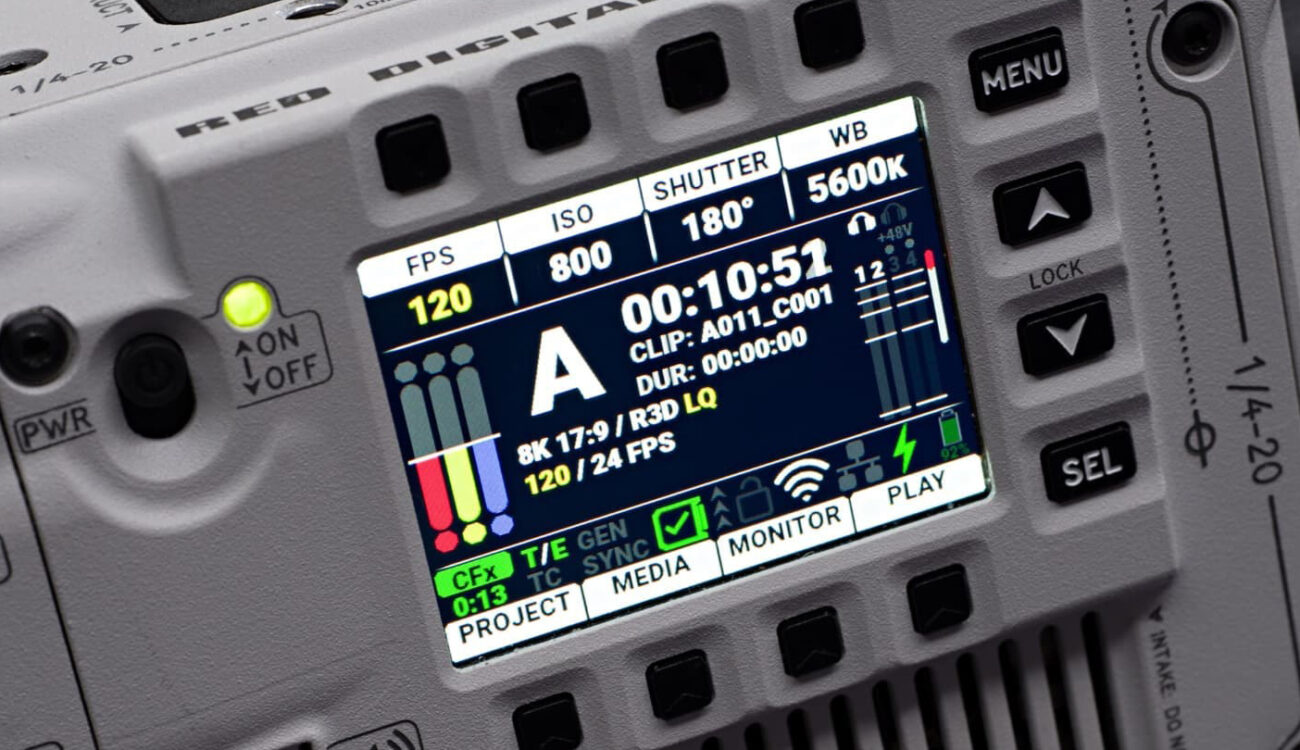 CEO of RED Digital Cinema Jarred Land posted a picture on his Instagram profile teasing a new RED camera. This upcoming model should be capable of shooting 8K at up to 120fps. Its never-seen-before form factor hints that it should be the first model of a new RED camera lineup.

In typical RED fashion, the announcement of the development of a new camera comes from Jarred Land’s Instagram profile. The picture he posted showcases the right-hand side of the new camera. The information displayed on the LCD screen already tells us a lot about its specs. Let’s see what we know so far.

With camera brains and sensors being released at different times, RED’s product lineup has been quite confusing for a very long time. Luckily, in 2018 the company decided to unify their camera lineup into the DSMC2 line: one shared body, but different sensors.

Then in 2020 RED released the RED Komodo and now the fresh form factor and white “stormtrooper” color of the recently-teased model hint that we are entering a new era of RED cameras.

The new model inherits some of the features of the RED Komodo, from the interface of the LCD screen to the simplified compression ratios for REDCODE RAW (HQ, MQ and LQ).

Some people on the internet are suggesting that this is going to be a high-end version of the RED Komodo, but I believe it’s more likely going to be the DSCM3 line.

In fact, while the RED Komodo is an entry-level product, this new camera must be a high-end model of the new lineup since the picture reveals that it is capable of shooting 8K at up to 120 fps.

Shooting REDCODE RAW in 8K at 120fps is a demanding task that requires very fast media. As shown in the picture, the new camera will probably rely on the CFexpress standard. Goodbye RED Mini Mag.

The picture also informs us that the camera is equipped with a LCD on the right-side of the body, which should act as a “built-in RED Sidekick” for 1st ACs.

Moreover, from the picture we can tell the new model should feature dual 12G-SDI ports, built-in wi-fi connectivity and the ability to record 4 audio channels of which at least two have +48V Phantom Power.

No information on pricing or availability has been released yet. However, Jarred Land captioned his post with a mysterious “Two more sleeps…”. We expect that more details about the new camera are going to be released in the next 48 hours. Stay tuned.

Do you think this new RED camera is going to be the first model of the DSMC3 line? What features would you like to see? Let us know in the comments below.