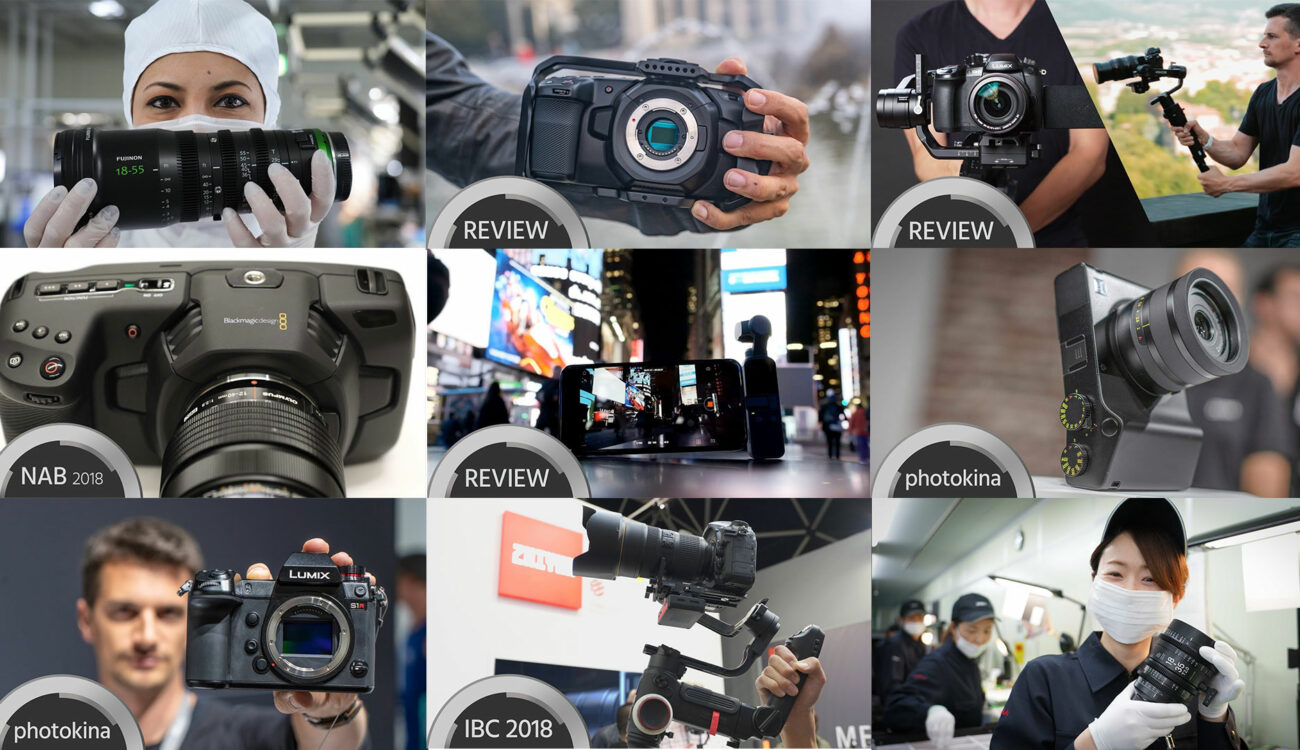 As you’ve probably noticed, the team at cinema5D more than ever before has focused on producing high-quality video content over the course of 2018. We said goodbye to using Vimeo as our video platform in 2017 as we really think they have completely lost their community and focused too much on selling paid accounts, and we started embracing YouTube during that time. The pro camera tech content released on YouTube has become consistently better and better over the years, and over the course 2018, we have started to see the fruits of our labor on YouTube.

In 2018, we had 14,161,934 minutes (or 236,020 hours or close to 27 years) of content watched, with a total of 6.4 million views. Now we stand just above 90,000 subscribers and we aim to finally crack the 100,000 within the next few months. Despite the high traffic rates of cinema5D.com, a large portion of our video audience watches our content only on YouTube. A big part of our effort for 2019 will be to get better conversions from YouTube to the site, and we are already planning a new exciting video format to tackle this.

Without further ado, let’s dive right into the 10 most popular videos we’ve released in 2018!

1 – FUJIFILM Factory Visit – How Lenses & Cameras Are Made

This was the first “factory visit” video we published, and it is to date the most successful (read the written post here). It was uploaded in early February 2018. My cinema5D partner and friend Johnnie Behiri managed to get unique access to the factory in Japan and crafted a unique, personal portrayal of people working passionately to create the professional tools we work with every day. Interestingly, about 40% of all views on this video came from India.

This is my in-depth review (read the article here) of the long-anticipated Blackmagic Pocket Cinema Camera 4k, which we previewed in an exclusive interview with Blackmagic Design CEO Grant Petty earlier in the year (see below). We weren’t among the first people to get the camera, but nevertheless the continued success of the video shows me that quality still goes a long way these days, even when a review is not among the first ones. People watch an average of 5 minutes of this video, which is about a third – a higher value than most other videos on our channel. It’s a great and promising camera for sure, and I hope that most people who preordered it received it by now.

Very happy to see that the huge effort I put into this review is paying off with the consistently large audience it’s getting. Again, we weren’t the first ones to review the Ronin-S at all, which is why I decided to really take my time and use it on a number of paid and unpaid shoots to really wrap my head around it and become a pro at operating the Ronin-S. I’m still a bigger fan of lightweight two-handed gimbals like the MoVi, but the Ronin-S has so much great stabilisation and useful features built-in for such a low price, it’s hard to miss in your toolkit. Read my written review here.

Blackmagic Design is a big company that has made a huge impact in the post production technology and more recently the camera hardware world, but it’s also still owner-operated by CEO Grant Petty. That’s as unique for a company like this just like the fact that they’re from Australia. We were extremely honoured to be invited for an exclusive pre-NAB hands-on interview with Grant Petty about his newest baby, the Blackmagic Pocket Cinema Camera 4k, which I later reviewed. Here’s the written post.

DJI invited us to New York City for their global launch event of the Osmo Pocket. I went without knowing what would be announced – and I was surprised to see that it was a tiny gimbal that was perfect for vloggers and as a c-camera. It’s a neat little tool, yet I was still surprised be the amount of interest even from the pro community. It’s definitely a sign of things to come. Head over to the written review here.

Parallel to Photokina in Cologne this year, ZEISS decided to hold a big exclusive event for dealers, and we were lucky enough to be invited – and to everyone’s surprise, they announced that they will introduce their first digital camera. Because there weren’t many media outlets there, we got an exclusive interview about the camera. The ZEISS ZX1 is a unique concept as it’s a full frame camera with fixed lens, with Lightroom Mobile built in. The camera was still in a mockup stage and we weren’t able to use it yet, but it should be released sometime 2019. Click here to read the written post.

Another video about a newly announced mock-up camera, this time the upcoming LUMIX S1 and S1R full-frame cameras from Panasonic. Unfortunately not much to see here in terms of camera features as well, but it was great to see Panasonic finally going after the full-frame market with their newest announcements from Photokina. Here’s the written post. These cameras are supposed to hit the market soon, and as usual, we’ll do our best to review them as early as possible.

An interesting new gimbal concept from Zhiyun-Tech that’s going to succeed their very popular Crane 2 one-hand gimbal. We touched base with them during IBC in Amsterdam and they showed us their new generation. Read the written post here.

The second factory tour video after the FUJIFILM video which made the top of our list this year. Johnnie received unparalleled access to the SIGMA headquarters and factory, with an interview to CEO Kazuto Yamaki-san. Another very human and personal approach in this mini-documentary, showing the faces and family passion behind the globally renowned SIGMA products. Read the post here.

An interview with Sony senior manager Yatuka Iwatsuki-san about what is likely the most anticipated mirrorless camera among filmmakers – the still-unannounced Sony a7S III. Reading between the lines, it won’t be announced anytime soon, but we’ll be happy to be proven otherwise if it will be coming soon after all.

What was your favourite cinema5D video of the year? Let us know in the comments below. We’re listening and we’re constantly working on new content.