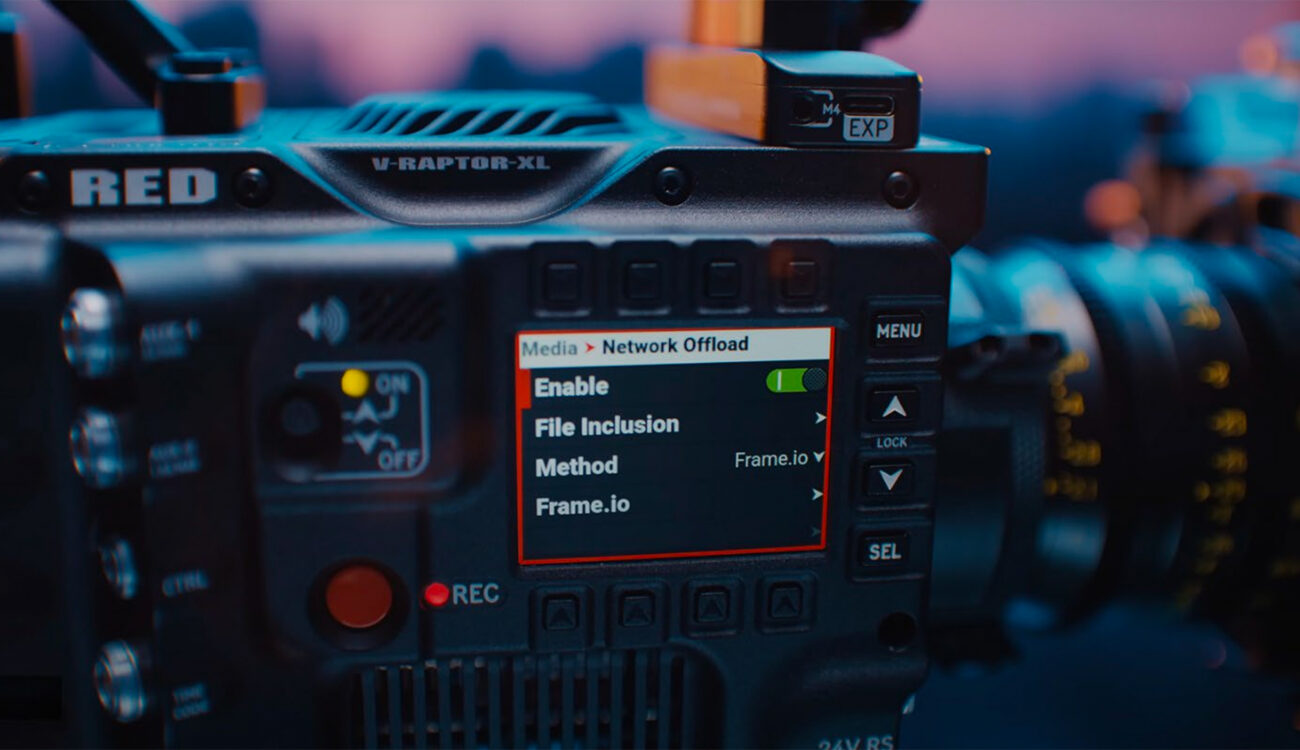 frame.io’s Camera to Cloud (C2C) has been around for a while, since it was first launched in February 2021. Earlier this year, the Adobe-owned remote collaboration platform shook hands with Atomos and several other hardware manufacturers to push the boundaries of what’s possibile with this hard-drive-free workflow.

More recently, the company announced a partnership with RED (but also with FUJIFILM) to bring native C2C integration to their flagship 8K digital cinema cameras, namely the V-RAPTOR (check out our Lab Test here) and V-RAPTOR XL. The Beta firmware updates that make this magic work are now available, so let’s take a look!

The advent of native Camera to Cloud integration to RED’s V-RAPTOR and V-RAPTOR XL is a clear sign that this technology is not limited to proxy files. Instead, it seems it truly aims at making media-driven workflows obsolete in the shortest amount of time.

Indeed, RED’s flagship cameras will now be able to instantly upload 8K .R3D files to the cloud, and these will be (almost) immediately available to remote collaborators world-wide for editing purposes. Along with the original RAW footage, users can also choose to upload other useful collateral media, such as ProRes proxies, CDLs, LUTs, and .WAV audio files. Upload can happen wirelessly or via a Ethernet connection, which should provide faster and more stable results.

Along with an active frame.io or Adobe Creative Cloud subscription, an essential prerequisite of this workflow is the existence of lighting fast internet on set. According to frame.io, the minimum upload speed should be around 800Mbps for .R3D files. However, you can also opt to only upload ProRes proxies. In this case, 80Mbps should suffice.

RED TECH LIVE with frame.io: today at 10AM PST

To show off the potential of this new integration, Michael Cioni from frame.io will go live on RED’s YouTube channel. The live stream, which is scheduled for today at 10AM PST, will entirely focus on Camera to Cloud workflows. The event is totally free and will include a dedicated Q&A session.

The Camera to Cloud Beta firmware updates for RED V-RAPTOR and V-RAPTOR XL are now available to download from RED’s website. The updates are free of charge, but you will still need a paid frame.io or Adobe Creative Cloud subscription to benefit from this feature.

Lastly, there’s currently no official word on upcoming C2C support for the RED V-RAPTOR S35, which was introduced just a few weeks ago.

What do you think about frame.io Camera to Cloud coming to RED V-RAPTOR cameras? Would you entirely rely on a media-less workflow? Let us know your thoughts in the comment section below!